The captivating, Oscar-nominated 'After the Wedding' is a fantastic film

But that's hardly the only thing that makes this film worthwhile. About 45 minutes into it, I stopped and thought, "Why am I enjoying this movie?" because it seems like a very mundane film. The mundane aspects vanished shortly after that 45-minute mark; nonetheless, the elements that made it interesting up to that point make it riveting afterwards.

I think one thing that it has going for it is that it's Danish, and not only are Danes taller and smarter than most people; they also make pretty movie-pictures. It was the Danes, after all, who invented the Dogme filmmaking rules, which are designed to make it harder to make a film. Sometimes, in film-making as in love-making, harder is better.

Director Susanne Bier previously made one Dogme film, and she takes some of those elements into her latest work. The plot is freakishly tight; the camerawork, though flawless, is almost all handheld; the drama comes from the horrors of simple human interaction.

The story begins with middle-age Jacob working in an orphanage in Bombay, India. He's called back to his native Denmark, because there might be a chance to gain some funding, and since the orphanage has to turn away 500 children for every 50 it takes in, a little cash is probably worth spending a few days amongst blue-eyed ex-colonialists.

When Jacob arrives, he meets with wealthy financier Jørgen. Of course, Jacob the idealist hates him, but, in seeking his cash, agrees to go to the wedding of his daughter. If you caught the ambiguity in that sentence, you've caught the central plot motif.

But that's hardly the only twist in this film. Carefully spaced throughout its two hours are a series of odd reversals that would make Shakespeare envious. While I can't reveal the plot without ruining its charm, I will say that Deckard is an android, the psychiatrist has been dead for the whole movie, it's only a dream, Romeo kills himself, Lt. Cmdr. Tom Farrell is the Russian spy, her best friend marries the other woman, the alien is hiding in the escape pod, Elizabeth marries Darcy, Old Yeller dies, they throw the ring in Mount Doom, Darth is Luke's father and Bambi's mother gets shot by hunters.

But the twisting plot wouldn't work if it weren't for the excellent acting. Mads Mikkelsen (who played the villain in Casino Royale) is not only one of the finest Danish actors working; he may well be one of the best actors in any Schengenland country. When he discovers that Jørgen's wife is the woman who left him 20 years earlier, the coincidence seems impossible. Luckily, that very coincidence is at the heart of the cunningly crafted plot that Jørgen, who carries a dark secret, has set in motion and which motivates the film.

With no special effects, gun battles, spaceships or talking dinosaurs, the four cinematographers of this film have nonetheless created something that is visually every bit as engaging as watching Steven Spielberg coax a talking dinosaur onto a spaceship with a gun battle.

The camera frequently cuts to extreme close-ups of eyes, hands nervously twitching, foreheads wrinkled in despair and dead flowers rotting on the vine. This could easily be a cheesy effect in an American tearjerker, but under Bier's unexpectedly powerful directing, it creates the effect we have when actually engaging in an emotionally unpleasant conversation, as our eyes dart about for some sort of relief.

Bier also creates characters who are both sympathetic and morally questionable, and she uses them to craft a film that's climactically satisfying without neatly tying everything up.

As the story shifts from Jacob's concerns to Jørgen's, Jørgen becomes every bit as sympathetic as the penniless orphans whom Jacob congratulates himself for caring about. Even the minor characters come to life, and no one winds up being a set piece.

At two hours, the film rarely drags, except perhaps for a few minutes after the first hour when it seems like everything that could possibly be in any given plot has already been revealed. It is, in fact, at that point that all of the previous events acquire a new meaning--a difficult trick to pull off, and one that most writers flub.

Bier does it not only without straining credulity or creating artificiality, but also without a great deal of expository dialogue. In certain sequences, important facts are revealed solely by the expression on character faces. It's exactly these points--where, in an American film, one character would say to the other, "Why, not only are you the woman who left me 20 years ago, but plot point, explication, emotional response, further explication"--that make After the Wedding a rare treat.

After the Wedding is not showing in any theaters in the area. 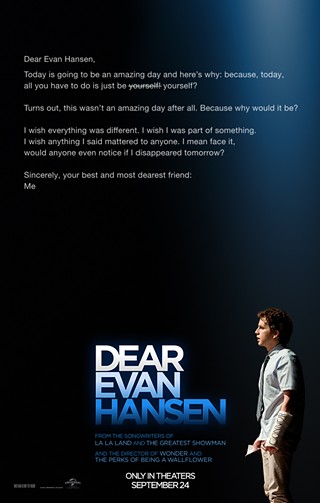