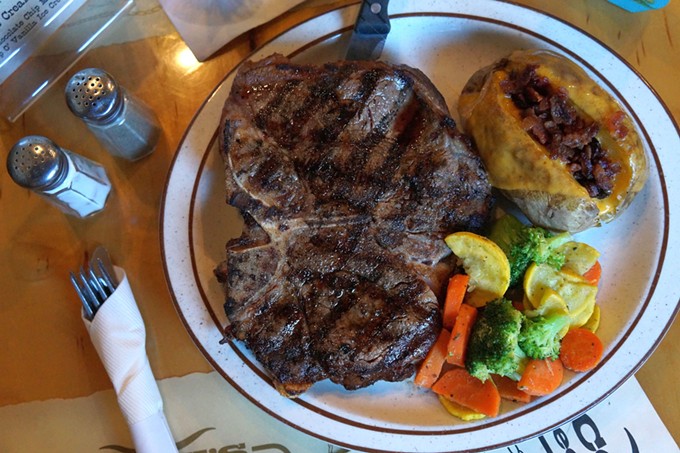 Visitors have been coming to Tucson for that Old West experience for nearly a century now. It makes sense; this was, and still sort of is, a destination for bravados or those avoiding the expense of living slightly near an ocean. Best thing is, Tucson is easing into becoming a food destination thanks to accolades, awards and television exposure, so while celebrating the hard frontier lifestyle, we can take a break and get some truffle-infused risotto just up a'ways.

In the not-so-ornery neighborhood of Winterhaven, there is a food joint that has withstood the ravages of three decades serving up large plates of chuck wagon style grub and, as it turns out, not a whole lot of folk knows that it even exists. Named after Buffalo Bill, Cody's Beef 'n Beans opened in March of 1988 by a man named Mike Farren (who knew the name Mike just didn't have the gun slinging clout that Cody did), a former butcher and home builder who had dreams of operating his own steakhouse. In the former home of a shuttered deli, Mike and his wife Sandy moved in and put his meat-cutting knack back to work by offering up power slabs of quality cuts and keeping with the southwest theme of cowpoke, ranch hands and the ubiquitous steer skull as décor.

Cody's opened with mild success but only having experience in meat cutting, and not running a family restaurant, Mike began to grow weary of the daily grind. So after a year, his son Rohn took over the business with the aid of his wife, Rebecca. From there the steady amble of being a neighborhood steak joint took hold and before long, 30 years have passed and Rohn and Rebecca are still at the helm.

"Funny thing is, I'm not much of a fan of beans," laughs Rohn. "But people love our beans and it's been the same recipe since dad opened the doors. I think putting the word 'beans' in the title of the place just gives it a bit more cowboy feel. Kind of like that one scene in Blazing Saddles."

The menu, much like the beans, hasn't really changed through the years, although they have done away with the ham steak and kabobs, and you can gander at an original menu on your next visit. The meat arrives fresh every morning and is then hand trimmed to the various cuts with scraps used for soups, those infamous beans and, in my opinion, one of the best burgers in Tucson. The Cody Burger ($9) is the same recipe and delivery as it was back around the time when Beetlejuice was just hitting movie screens. It is quintessential steak-joint glory; juicy, generous and—the best part—extremely old west school. And I have never been disappointed with the steaks. The Porterhouse ($28) is a 24-ounce power grab of char-grilled magnificence. With some slight intimidation, this glowing gristle raft sits before you waiting to be dealt with, and one does so with patience, appreciation and carnivorous aplomb.

The ambiance of Cody's has remained intact as well and, to Rohn and Rebecca's slight chagrin, celebrates '80s western kitsch. But that is what makes the place so endearing. Older patrons appreciate a tip to the past while the younger crowd delight in its vintage charm and appeal. Perhaps it's the wagon wheel that greets you at the front door or the rodeo posters from Tucson's history; whatever the case, it makes chowing down on a full rack of baby back ribs ($23) or the 16-ounce cut of prime rib ($27) feel and taste that more authentic.

For those vegetarians who are tagging along with meat eaters in a meat-eating Xanadu, no worries. Cody's has a variety of vegetable sides, appetizers, huge baked potatoes and even salads (that normally come topped with chicken or steak but they can work with you on this). However, it's their veggie burger ($9) that will be your go-to item. Made with black beans and plenty of garlic, this is a surprisingly delicious non-meat item in a swirl of mostly beef, fish and poultry. Cody's may not be fancy or even vaguely commercial, but it's the level of choice chow and service that keeps them around for further hankerings.

Also, Cody's just might be haunted. Keeping that Old West Tucson tradition alive (pun intended), employees and even a few customers have noticed a shadowy figure of a man hovering around dark corners and the back dining hall. Could this be the spirit of Buffalo Bill himself? Since the legend of the man loved him a good chaw of beef, I wouldn't doubt it.