In 2003, thrillseeker Aron Ralston bolted out on his own to explore Bluejohn Canyon in southeastern Utah. It wasn't his first time canyoneering in Bluejohn; in fact, as he told two travelers he encountered that weekend, he considered it his second home.

But this trip was different. Ralston put all of his weight on a loose stone, which collapsed and trapped him deep in a crevice, pinning his right arm against a narrow wall of the canyon. He remained there for five days before famously freeing himself through excruciating means and—suffering from shock, dehydration and delirium—walking some eight miles to safety.

Ralston's book, Between a Rock and a Hard Place, chronicles the week that should have been his last, and Oscar-winning director Danny Boyle does an exceptional job of illustrating an ordeal that should be impossible to film: one man trapped against a wall for five days. 127 Hours pops with an unbelievable amount of energy, with Boyle wisely choosing a fast-paced editing style to not only make time go by more quickly, but also to change the perspective as much as possible. Otherwise, this could have been a tough filmmaking experiment to endure.

Boyle's ingenuity is matched by the go-for-broke approach that marks all of James Franco's best work. Franco has always shown flashes of brilliance, but the bulk of his career has been a mixture of movies nobody saw (Sonny and City by the Sea, for instance) or taking checks for doing next to nothing (Spider-Man, Annapolis and Flyboys). In the past couple of years, however, Franco has become more focused and comfortable with his abilities ... if you don't count two recent stints on General Hospital.

This is the role that solidifies Franco as a go-to actor. On the screen completely by himself for roughly 80 percent of the film, Franco creates a complex Aron Ralston, who we meet as a fun-loving guy before he gets trapped. The resourceful actor believably suffers hallucinations, shifts gears at the drop of a hat to wordlessly explain the grim prospect of his impending death, and tortures himself in order to free himself.

Boyle, fresh off the success of Slumdog Millionaire, reunites with key contributors from that film. He co-wrote the 127 Hours script with Simon Beaufoy; Anthony Dod Mantle is one of two cinematographers (along with Enrique Chediak); and A.R. Rahman provides the film's terrific musical score. All of them won Academy Awards two years ago, and all of them are essential again.

Rahman's presence is unmistakable, and while this score isn't as dynamic as his work in Slumdog, it doesn't need to be. His music belonged in the foreground in Slumdog, but here, it reinforces Boyle's energetic direction and Franco's fragile emotional state. Mantle and Chediak, along with editor Jon Harris, are responsible for executing Boyle's vision, and 127 Hours is assembled beautifully. The angles are interesting; the colors are vibrant; the film takes breaths when it needs to, and leaves us breathless when it means to.

That Boyle makes a difficult and daring piece of filmmaking come together so beautifully and seamlessly is a testament to all of the key crew members—not to mention Franco's wonderful performance, which is the heart of the film. It's an unlikely tale told in an unlikely way that draws you in immediately and holds you in its grasp for 94 minutes, which is a damn sight better than being trapped by a rock for 127 hours.

127 Hours is not showing in any theaters in the area. 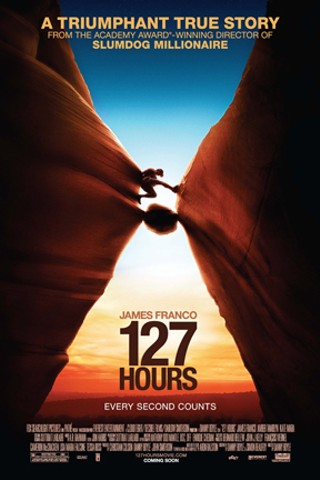