$8; free for members, kids younger than 17, veterans, active military and public safety officers. Free to all the last Sunday of the month. Next free day: Sunday, Nov. 24

As Alois Kronschlaeger's flight descended into Tucson, he was mesmerized by the views of the landscape below.

Everywhere he looked, towering mountains rose up from the desert floor: the Catalinas to the north, the Rincons to the east, the Santa Ritas to the south, and the smaller but spikier Tucsons to the west. These monumental ranges were clustered in a giant circle around the flat basin where the city lay. The Southwest sun cast the whole sweeping terrain into a kaleidoscope of light and shadow.

Most newcomers are stunned by the vista when they descend into Baja Arizona for the first time. Kronschlaeger was inspired. The Austrian-born, Brooklyn-based artist had been invited to construct a site-specific installation inside MOCA-Tucson, and he knew instantly what he would do. He would bring the mountains into the museum.

"Untitled (Basin and Range)" has taken over MOCA's entire Great Hall, and then some. The William Wilde-designed building once served as the downtown fire station, and four Kronschlaeger "mountains" occupy what was once the cavernous garage, where oversized fire engines once parked. A fifth mountain, like the Tucsons a bit smaller than the rest, spills outside onto the plaza.

Re-creating Tucson's geologic alternation between flat desert and sky island, the artist used the museum's gray concrete floor as his basin, and created his ranges out of pine boards, sheets of aluminum mesh and splashes of silvery paint. It took nature 8 million years to make Tucson's mountains, and seven weeks for Kronschlaeger and helpers to make his.

Everything about "Basin and Range" is massive. Fifteen-hundred pieces of lumbered pine, each 12 feet long and 2 inches square, were cut and screwed into lattices to make the mountains' bones. The aluminum mesh that lies lightly on that wooden grid arrived on 100-foot rolls. The tallest peaks go all the way up to the ceiling, 19 to 20 feet high, and assistant Henry Kerr, a painter himself, had to clamber aboard a cherry picker to ascend high enough to pour the paint down the mountaintops.

Seen through the big windows from outdoors, the most striking thing about the installation is its scale. Yet when visitors go inside and hike through it, they discover small, intimate spaces deep within the mountains. No mountain-climbing allowed though: walkers must remain on the basin floor.

You start at Range #1, at the northeast corner of the room, and meander through the narrow slot canyon that joins it to Range #2, on the southeast. Then it's on to the biggest mountain, Range #3 on the southwest, so big it took Kronschlaeger and company a biblical seven days to create.

Range #4 takes you back to the big windows on the north, which look out on the architectural counterparts to "Basin and Range": the cathedral towers of Saint Augustine and the skyscrapers of downtown's hardscape canyons. And if you squint hard, you can glimpse real-life cousins of these art mountains: Finger Rock and Mount Kimball in the Catalinas, tiny in the distance.

Little Range #5, out on the patio, clambers down a staircase and settles beneath the spreading branches of a real-life tree. Out here, you can sit a spell and ponder a metaphor: You'll be occupying a space between a fake mountain trapped inside a firehouse and a real city pushing rapidly against its mountain limits.

Aside from its scale and its clever juxtaposition with urban towers, the most interesting thing about the installation is the way it plays between realism and abstraction. When you stand at a distance, looking at the outlines of the ranges, you see an approximation of the ridgeline of mountains, sloping down from their summits into undulating canyons and foothills. But when you go inside the canyons and stare down the wooden lattices, you see a cascading geometry.

The pine boards were screwed together in 3½-foot squares, and when you look straight at them down a row, the squares seem to diminish one by one, converted by perspective and the mind's eye into smaller and smaller squares. Look at them on an angle, and you see bold diagonals everywhere, slashing the rectangles into triangles.

The silvery mesh catches the light, and what with all those giant windows it's different every hour of the day. When the mesh shimmers white, though, these mountains look more alpine than Southwestern. And of all the component parts, this screening is the messiest. Tacked here and there to the pine, tucked under the wooden footings on the floor, its billows are sometimes out of harmony with the wooden grid. The latticework is sharp and splintery in places, too. You can be forgiven if this sophisticated art installation sometimes seems like an overscale version of those papier-mâché volcanoes kids construct in elementary school.

Still, Kronschlaeger is onto some interesting ideas. He reports on his blog that "Basin and Range" is his most ambitious project to date, but he's been jetting around creating installations internationally. Just after his Tucson show opened, he flew to Beijing to build a purely abstract "Multicolored Grid" inside the Yuan Art Museum. Before Tucson, he made a major piece in Grand Rapids, Mich., in an abandoned museum, that's thematically closer to "Untitled: Basin and Range."

The museum's old-fashioned animal dioramas had been left to decay, and Kronschlaeger constructed strange modernist cages and walkways for the forlorn beasts. A new black latticework pinned a pair of moose into their painted landscape, and a wooden frame hemmed in deer that were trying to forage on artificial plants.

"Untitled: Basin and Range" likewise plays with realism and abstraction, with nature and encroachment. Viewed in that light, the mountain trapped inside the firehouse becomes a piece of environmental art, a critique of nature tampered with and tamed.

When the show ends, Kronschlaeger's mountain will disappear. The work is site-specific and ephemeral, never to be reconstructed elsewhere. It will be dismantled and dislodged, chopped into its component parts, to be recycled into future MOCA projects or donated to charities.

Its certain demise can be read as a parable: Nature, artificial as it is, will vanish, and the built human environment will survive. 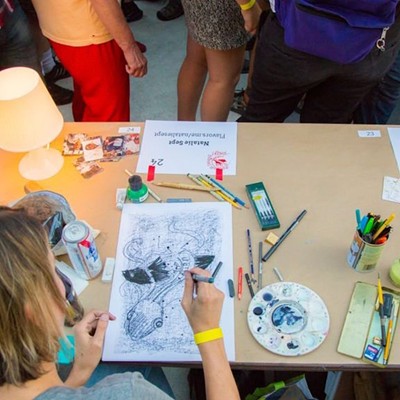 Bored Yet With Playing Outdoors? Here's a Thought