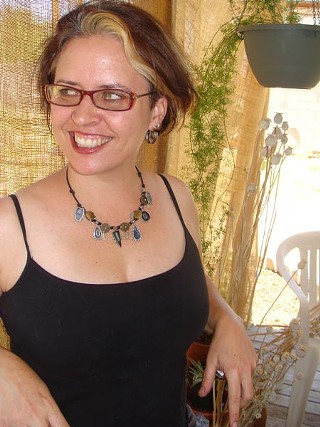 In the back of Maureen Brusa Zappellini's house is a little paradise of fruit trees, a veggie garden and a green-eyed doggie named Daisy, but the real treasure is a custom-built Tuff Shed where the artist hunkers over her tools and works with pewter, silver, aluminum, brass and copper to create jewelry—and even a series of boxes she describes as "alien pods." Zappellini's work will be on display at Arts Marketplace, 40 W. Broadway Blvd., with an opening reception from 6 to 10 p.m., Saturday, June 12. Check out her work at www.etsy.com/shop/cosmosmoon.

I saw you speak at an Ignite Tucson show, and you talked about getting the courage to quit your job and do this full-time. How did that happen?

I was working for a very good jewelry company, a great place to work, and I'm friends with everyone still. It just got to the point where the amount of time I was spending there was impeding my growth as an artist. I just had to take a look at my situation. Luckily, I have the support of my husband, who works at the university. I had to think in these terms, "Look, I am mortal. What do I want to do?"

What did you want to do?

What I really wanted to do was make the stuff that came knocking at my door, stuff my muse was telling me to make—(to) let go and go for it. What I said to Lisa, my ex-employer, is that I felt like I had to let go of the edge. I was in the pool and doing well, but needed to swim.

A lot of artists say that, but it's hard to do.

It was hard to do, just because in society, we have so much about success being money-related. I almost see the financial downturn as a positive. It gives people the excuse not to have as much of everything. It's all about simplifying ... and I'm following my bliss. Honestly, it is the ability to be out here and make the things I want to make, and talk to interesting people, and have experiences instead of things. I can say that, and I know that's kind of elitist, but I'm fortunate, I guess, that I'm able to do that.

Have you set sales goals for yourself?

Here's the thing. Before I quit my job ... I had already started to put my work online on Etsy. I have to say, (Etsy and other online sales sites) really changed the game for a lot of people. I had been at a gallery in town, which will remain unnamed. I was with them for eight years; I left, because I wanted to represent myself the way I wanted to represent myself. I could take the images and make my shop the way I wanted it to look, and tell my customers what I felt they needed to know.

Do you still show at galleries?

I still show with galleries outside of Tucson, on the East Coast and West Coast, but I have this steady thing with Etsy. Every once in a while, I make a sale; it's very encouraging, but I also like the fact that people give you feedback on what you're doing. It's the first time I've had real feedback. I've been showing in galleries for 20 years plus, but I have never received feedback until now. It's helped me develop my line.

What will your show at Arts Marketplace be like?

The work I'm showing is work that's more playful, more colorful. I'm not showing my high-end work. I'm doing pewter, and I'm going to be doing a pewter demo during the opening.

You said you started off as a painter, so how did you end up metalsmithing?

I was way too punk rock for New Hampshire, where I grew up, and during summers when I was in college, I had to get a job to help pay for school. No one wanted to hire me; it was an appearance thing. My mom was lamenting this to her old jeweler, who was an old hippie. He told her, "If she wants to, she can apprentice with me for a couple of summers." I would wear whatever I wanted to and listen to whatever music I wanted to.

I continued being a painter. After school, I was a fairly accomplished painter, but I found myself getting more and more disenchanted with the whole painting world. I wanted to play with jewelry. I am coming around to painting again—but this time, I'm painting on metal.