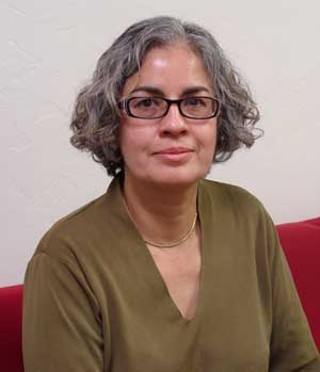 Mari Herreras
Rosi Andrade
Rosi Andrade, a research associate with the UA's Southwest Institute for Research on Women (SIROW)--a part of the Women's Studies Department--is nearing the end of a three-year project to preserve the contributions women have made to downtown Tucson commerce, especially as another round of revitalization through Rio Nuevo approaches, which could further change the character of downtown. The project will culminate in an exhibit and eventually a sculpture installation. For more information on the project and SIROW, go to the website, or call 621-7338.

Why focus on downtown Tucson for this project?

Are some of these businesses still downtown?

Well, for example, Cele Peterson, whose downtown shop was on Pennington (Street)--but now she is at Grant and Swan (roads)--has a long history tied to downtown. There is Maria Garcia, who had La Indita Restaurant next door to the federal courthouse on Scott (Avenue), but she moved to Fourth Avenue. Then we have Suzana Davila, who bought the La Indita shop, and it became the Little Café Poca Cosa. And there's Shana Oseran, co-owner of the Hotel Congress.

Did you find when talking to them that they had something in common?

Yes and no. Suzana has a strong personality, which is wonderful. Her attitude is an important part of her business.

Yes. When you go to Café Poca Cosa, you're probably going to see her.

Right, and it's almost like you are going to her home. Like the combination plate: She determines which combinations you'll get. When we asked women about how difficult it is for women to be in business, and (whether) are there more traditional businesses for women to be in, Suzana would say no. She doesn't feel there were obstacles for her. ... She's not willing to accept any obstacles that might be there. ... Maria Garcia is very interesting, because she is also a very strong and vibrant woman, but she's very humble, so you might not know unless you know her a little more in-depth and make connections with her about her activities outside La Indita. For example, the photo we have of her is a photograph taken by the Tucson Citizen, and it is one of her with Subcomandante Marcos (of the Zapatistas). And as you meet them, you find out that Maria Garcia's husband is governor of the Tohono O'odham in Mexico, and that she and her husband advocate for indigenous rights.

Did you learn anything that surprised you during the interviews?

One of the more delightful stories is Wig-O-Rama. It's been there forever, but you don't think about it.

It's true. We were walking by it the other night, wondering about it.

Who goes to Wig-O-Rama? In meeting Myung Kim and her daughter Suzie Kim, I discovered that it is a very busy place. People are coming from all over and heading downtown just to go to Wig-O-Rama. One of the things I ask is who (the) clientele is. I learned that it is a broad spectrum and intergenerational. People come there because they want a different look, or for a costume ... but the biggest surprise for me are people who are undergoing (chemotherapy) and have lost their hair. (Many customers) are important clients from out of town ... and the owner and her staff help fit a wig and make adjustments by trimming the hair and updating the style. What I discovered is very different from the window front you see.

How will this project culminate?

The project was to have a collection of interviews and to archive those interviews at the library, which is going to be happening soon, and then have an exhibit. We had some discussion of where that will be. Things are still in flux--one day, plans for Rio Nuevo are going this way, and the next day, they are no longer talking. I approached artist Blair Lange. She was willing to take on the project and received a very small honorarium to help create art for the exhibit and participate in a sculpture. Her brother donated materials. Harold Hilborn from the Holy Hammer Ironworks, he did the iron sculpture for the project. As far as a formal unveiling, we don't have a date set, and we don't have a home for it--but we're working on it.