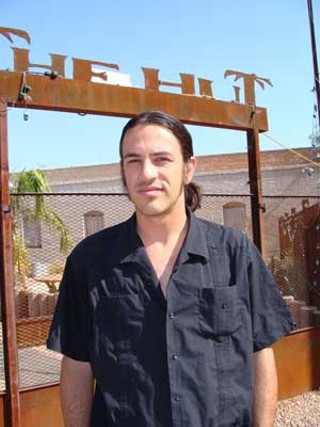 Mari Herreras
Bryan Sanders
Bryan Sanders, with the Tucson funk band 8 Minutes to Burn, says he spends too much time hanging out and talking about politics, when positive action is needed most. Thus, Sanders organized Iraq Aid 2008, a concert featuring local groups, at 7 p.m., Saturday, May 24, at the Hut. Cover is $8, and all proceeds will be split between the American Red Cross, Doctors Without Borders and Disabled American Veterans. For more information, call the Hut at 623-3200, or visit the Iraq Aid 2008 Web site.

I got into playing music two years ago with a band called 8 Minutes to Burn. These are just friends who got together and started this crazy funk band. From hanging out at the Hut all the time, I got to know the people who run the Hut pretty well. I sit and talk about politics a lot, and I felt like this could be an opportunity to do something, however small, that's a change from the same old verbal shenanigans that go on in bars and all over this country.

Yeah, that proverbial watercooler talk, which is a stupid metaphor ... it only goes a very small way in doing anything, and you can even argue that it takes away from the energy you can use in trying to do something.

So is this an anti-war event?

This is distinctly not an anti-war event. We don't want people who are for the war to feel that they cannot come to this event. I happen to be distinctly against the war, but it's my opinion that people who support the war have an even greater responsibility in terms of doing something positive for the people who are affected in extension by their ideological choices. ... So if you're pro-war, you certainly should be at the Hut on May 24, having a good time and contributing a very small material benefit to some people who need help.

How much goes to the organizations?

The $8 cover charge will go to the charities, and the Hut is going to donate 10 percent of the bar sales for the evening.

How did you pick the organizations?

... These three organizations are amazing and probably best known for being able to run on very little in administrative costs. The American Red Cross does unbelievable work all over the world, and the work they are doing in Iraq is specifically focused on people who have been displaced. ... Doctors Without Borders is very efficient, so they don't spend very much on overhead costs, administration and on salaries, which is great. Just the amount of money we'll donate to them will help thousands of people in Iraq specifically. Financially, it's a disaster for the soldiers who are injured or maimed--these men and women come back and have to shoulder the burden of their own care to a great financial degree. Disabled American Veterans gets involved with that side of things. If you think about how much it costs to help someone who has lost a limb, just the average cost of a modern high-tech leg is $50,000 to $60,000.

Who is onboard to perform?

Al Perry; Michael P. Nordberg, who is a real big local act and has a new CD coming out; Cosmic Slop are a great funk act; Planet Jam are the best reggae act in town; American Android have a huge following; (8 Minutes to Burn is) going to play a set; and a band full of veterans called The Gallery is going to play. We're trying to get the Lunasong dancers to perform, so Lunasong dancers: If you are reading this article, get in contact with me, because you are impossible to get in contact with. Hopefully, Cadillac Mountain is going to play outside.

Should we be done protesting the war?

Protests don't go far enough. And the protests are a negative--to me, anyway--rather than a positive energy, and that energy can do so much more. ... Musicians have always been the natural progenitors of mass discontent. You know the old slogan written on Woody Guthrie's guitar: "This machine kills fascists." It's a romantic idea that you can go out and protest, but it's more romantic and sexier if you go out and help somebody who needs help.

Are you frustrated that we don't necessarily do more?

... Who cares what I think, when there are people whose situation is vastly more complex and volatile than (the situation in) Tucson, Arizona? The life we live here is extremely easy. I'm sitting here with you talking about the war and drinking a $2 coffee on a very nice street in a beautiful café. Those simple things have been lost for a huge swath of people who never asked for it.