California-based Donut Bar opening its doors in Tucson this weekend 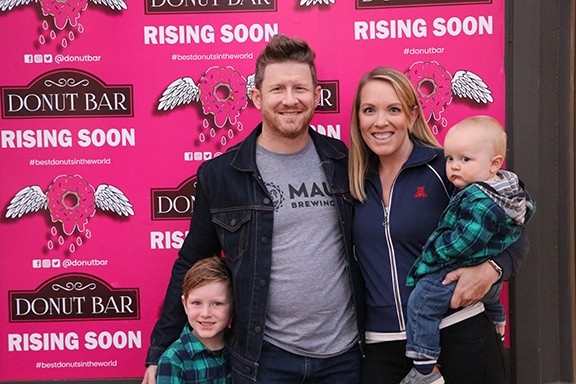 The California-based purveyor of tasty treats is a mainstay across The Golden State, drawing lines of hungry patrons every morning, and found its way to The Old Pueblo thanks to the husband and wife team of Nick and Jessica Mueller.

The Mueller's move to Tucson is a homecoming of sorts; both spent much of their childhood in the area, and were interested in returning after Nick got a taste for owning his own businesses in the startup industry and longed to be his own boss.

The couple was familiar with Donut Bar, and soon realized they'd found the perfect opportunity.

Despite its prime location, Donut Bar is a stone's throw from Batch Cafe & Bar and a short walk from the soon-to-shutter Irene's Holy Donuts on Fourth Avenue. Nick and Jessica don't seem at all worried about the competition.

"A lot of people can learn how to make a really good donut," Jessica says. "What we plan to perfect and offer the community is more than the donut. It's about the whole experience. It's a really fun place, not just a regular donut shop."

That "whole experience" begins the moment customers walk through the door, Jessica explains. There will be music playing, a "fun ambiance," spots to write on the wall and plenty of selfie opportunities. Local artists are also coming in to help decorate and provide some Tucson culture to the building.

"We're making the business three dimensional, reaching out to the people and engaging with them rather than just waiting for them to come in the door," Jessica says.

While the scenery and decor may help, the proof is in the pudding (or in this case, donuts), and the Mueller's are confident their fare will win over hearts, minds and bellies. Donut Bar will stock roughly 30 different kinds of donuts every day, half regular and half rotating, with plenty more varieties just waiting to roll out.

All of their food is made fresh in house every morning with as many locally sourced ingredients as the Muellers can find.

The selection will include timeless classics like the Homer (yeast donut with pink icing and sprinkles) and more adventurous choices like the strawberry split (an open donut with fresh berries and house-made whipped cream). There's even a grilled cheese donut, not to mention one filled with an entire pop tart. The menu will also include vegan options.

"Our donuts are really playful," Jessica says. "We do a lot of special ones throughout the year. For May the Fourth, we made a bunch of Star Wars donuts."

Whether it's topped with Yoda or a unicorn, donuts will be available starting at 7 a.m. until they're all gone. Thursday through Saturday, Donut Bar will reopen from 5 to 10 p.m. to serve even more baked goods plus a selection of local craft beers, plus cider and wine.

"It's not really a restaurant, we're not a typical bar," Nick says. "We're a place where you can come and get something to make everyone happy. We offer a little bit of variety... Even if they want to start the day with a grilled cheese donut, they can."

To celebrate their homecoming, Donut Bar is hosting a grand opening party this Saturday, Feb. 22, starting at 8 a.m. The festivities will include giveaways, face painting for the kids and goodie bags for the first 100 people in line.

The Mueller's are expecting a bit of a rush for sugary bliss, and hope the added fun will help their customers pass the time in line.

The grand opening won't be the only time Donut Bar involves itself with the community, Nick and Jessica are actively looking for local nonprofits that could benefit from a partnership, and hope to become a mainstay at local food events and festivals.