Despite a couple of Hollywood-style flaws, 'The Girl Who Played With Fire' is quite good

The Girl Who Played With Fire

Swedish writer Stieg Larsson's crime novels are now so popular that, to the surprise of snooty Europeans, actual Americans have been found reading them, in spite of the fact that the novels are written in words.

However, for the true American, only moving, talking pictures are a fit form of entertainment. Thus, the notoriously crafty Swedes have produced a series of films so that those uninterested in literacy can also enjoy Larsson's tales of men who hate women, and the super-heroic woman who takes them down.

The first film in this trilogy of murder, The Girl With the Dragon Tattoo, was a tremendous artistic success. Director Niels Arden Oplev tamed Larsson's tendency to go off on political/ideological diatribes and focused instead on the taut thriller that made the book's 600 pages so popular. With the sequel, The Girl Who Played With Fire, Oplev was replaced by Daniel Alfredson, who is equally Swedish and thus also quite adept at creating effective cinema.

The movie starts a year after the previous film. Luckily, Alfredson is smart enough to make the sequel completely accessible to viewers who didn't see Dragon Tattoo. Played With Fire has just enough expository material, introduced only when needed, and with extreme naturalism, to both keep the plot moving and the background clear.

This is a refreshing change from the standard stop-and-explain mode wherein characters suddenly decide that they have to give exposition on the current plot point just in case they're being watched by a benevolent audience-deity. (See Inception for a series of particularly egregious examples of this.)

TGWPWF avoids that with well-written dialogue and strong performances that create characters who can express themselves without needing to present oral autobiographies. Noomi Rapace reprises her role as Lisbeth Salander. Like all good mystery protagonists, she's an irresponsible, sociopathic, super-intelligent computer hacker, so she's exactly like Sarah Palin, except that she's a super-intelligent computer hacker. After being raped by her lawyer in the previous film, Lisbeth has been blackmailing him and living a life of luxury off some stolen cash.

Meanwhile, her former boyfriend, Mikael Blomkvist (Michael Nyqvist, also reprising his role), has continued as editor of muckraking Stockholm journal Millennium. He's just come upon exactly the kind of story he likes: a human-trafficking ring that's being financed by politicians and police officers.

When two people who are investigating the story are murdered, Blomkvist is surprised to find that Salander is the prime suspect; her lawyer is dead, and the gun used in all three murders has Salander's fingerprints on it. For a Swede, this is a real dilemma: On the one hand, Blomkvist probably wants to get naked and do Swedish things with Salander again; on the other, if she committed a triple homicide, he might have to publicly express feelings, which is like asking an Englishman to be friendly to foreigners or a Frenchman to eat individually wrapped cheese slices.

Nonetheless, Blomkvist begins investigating, as does Salander, and their separate and converging stories form a tremendously well-paced and tightly knit narrative. Sadly, it's not quite as smart as the last film. First, it relies on a few unlikely coincidences, and second, one of the villains is a superhuman strongman who is incapable of feeling pain. That's the kind of thing that makes sense in a movie that features Wolverine or a box of kryptonite, but it's a little out of place in a human-centered crime drama.

Though these problems cause a break in believability, they don't deter Played With Fire's ability to convey the intricacies of a complicated murder/kidnapping/prostitution plot, and the human emotions of the central figures. If anything, Salander is more interesting and complex in this film, and Blomkvist is less whiny and more heroic.

Nonetheless, I think fans of the first film will be slightly disappointed. Inventive cinematographers Jens Fischer and Eric Kress have been replaced by the more workmanlike Peter Mokrosinski. Mokrosinski does a great job of conveying information cleanly and subtly, but he lacks the compositional pizzazz found in Dragon Tattoo. That, combined with the slightly silly elements in the plot, make Played With Fire somewhat more Hollywood, and somewhat less Sweden, in its approach. It's still a very good film; it's just not quite as respectful of the audience's intelligence as the last one.

The Girl Who Played With Fire is not showing in any theaters in the area. 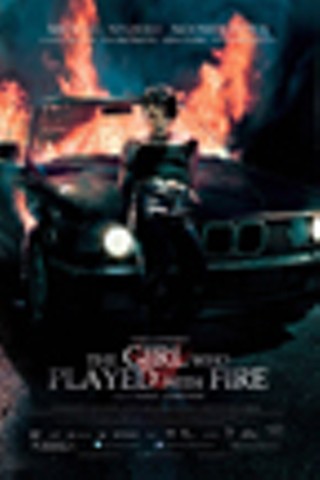