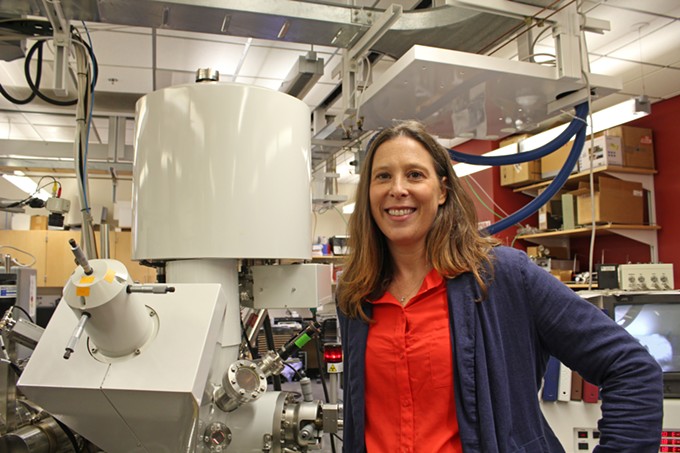 Courtesy University of Arizona
Erin Ratcliff, a professor of materials science and engineering, is leading a research project to develop wearable sweat sensors.
Researchers at the University of Arizona are developing wearable technology to analyze sweat, which may remove the need to draw blood to learn about the body's functions in certain situations.

The project is funded by an 18-month, $519,000 grant from the SEMI Nano-Bio Materials Consortium. The project falls at the crossroads of multiple academic fields, including engineering, chemistry and medicine, and has two main goals: develop a patch to reliably collect the sweat, and develop a biochemistry sensor to analyze the sweat.

When physicians take blood samples, the blood is tested for "biomarkers" which are indicators of medical phenomena like disease or infection. Sweat contains its own index of biomarkers, and collecting it presents a unique series of challenges and advantages.

"No matter what molecule you measure in sweat, you need to determine how it relates to the physiological status of the individual," says co-investigator Esther Sternberg, who serves as research director for the Andrew Weil Center for Integrative Medicine and UA professor of medicine. "In order to measure the status of the immune system without stressing an individual, one needed to get at immune molecules in a different way than drawing blood, because if you draw blood you need to stick a needle in a person, and that's a stressor... If you're trying to understand how the stress response affects the immune response, you need to have a noninvasive, unobtrusive way of measuring the status of the immune response."

Sternberg began working with biomarkers in sweat 20 years ago while working at National Institutes of Health. She says one of the reasons she was drawn to the UA was because of interdisciplinary research projects such as this.

Part of understanding biomarkers in sweat involves using a "sweat correlation lab" where subjects use exercise bikes to have their sweat collected in a controlled environment.

"We're able to relate the levels of the different biomarkers to the exact amount of stress that their bodies are experiencing because we correlate them with heart rate, heart rate variability, breathing and other well-standardized methods to accurately measure the activity of the brain and body's stress response," Sternberg says. "Just measuring the molecules is just the tip of the iceberg, you need to correlate them with all these different measures of the status of the physiological stress response in order to understand what they mean and have actionable results."

One of the first hurdles is how to accurately and quickly collect the sweat. According to project principal investigator Erin Ratcliff, a materials science and engineering professor and head of the UA Laboratory for Interface Science of Printable Electronic Materials, the obvious idea to collect sweat would be to make a patch to gather information from multiple pores at once. However, this means waiting for the space between the patch and skin to fill up with sweat, and during that time, the molecules and biomarkers can chemically change, altering important information.

Ratcliff became involved in this project five years ago, and her role is to convert the biomarkers into an electronic signal that devices use. Current wearable technologies, such as a FitBit, measure bodily data like EKG and heart rate, but don't measure the molecules behind the stress responses, such as cortisol or neuropeptide Y.

Part of the project uses a "virtual sweat sensing lab" which is a computer simulation that allows researchers to input information about biomarkers, printable materials and device architectures to determine what the output of a sensor would be before they ever make it.

"The prototypes that will come out of this 18-month project will be laboratory level... with the idea that the components will lead to a product stream for a particular company, but we're not going to make thousands of them," Ratcliff says.

While Sternberg says measuring swear has a tremendous and very wide applicability to many different diseases, it will not completely remove the need to draw blood.

"You're getting information from two different compartments of the body; the blood tells you what's going on in the blood and circulatory system, and sweat tells you what's going on in the tissues and peripheral nervous system... I believe this will enhance information and give you information that is not present when you only measure molecules in blood," Sternberg says. "Ultimately there may be circumstances in which collecting sweat and collecting molecules from sweat will replace the need to measure the molecules in blood, and in other cases to get a full picture of what's happening in the body, you may need to measure sweat, blood, saliva, urine and on and on."

The U.S. Department of Defense measures "technology readiness" throughout nine levels. According to Ratcliff, the team is aiming for the technology to be at level four at the end of this project. Technology Readiness Level Four means that "basic technological components are integrated to establish that they will work together."

"This speaks to the importance of academe and industry working together in an unbiased way, together with federal agencies, to solve complex problems which can't be solved only on the academic side or only on the industry side," Sternberg says. "This is an interdisciplinary, multi-college collaboration with an engineer of materials science in Erin Ratcliff, a chemist Ray Runyon, and myself a physician... When you're talking about cutting-edge, frontier science, that is the way science has to be done."