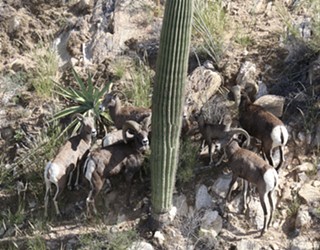 It was bighorn against bighorn last summer when a wildfire burned more than 100,000 acres of the Catalina Mountains, charring the forest and spreading smoke across the Tucson valley. The Bighorn fire was named after the bighorn sheep that inhabit the mountains. In the months following the fire, the Arizona Game & Fish Department says one of the most frequent questions they received was: how are the bighorn sheep doing?

“They got through the fire OK, as far as we can tell,” AZGFD public information officer Mark Hart said. “We’re calling the herd stable, which is significant when you consider the fire and the drought… We saw them maneuvering above, below and around the fire, which is what we’d expect. And there were no known mortalities or entrapped bighorns due to the fire that were overcome by smoke.”

October helicopter surveys of the Catalinas counted 35 bighorn sheep. For calculation purposes, this is estimated to be 50% to 65% of the total sheep population. Biologists were also encouraged by the sight of a lamb and several yearlings (young sheep over a year old) among the herd.

Prior to the Bighorn Fire, AZGFD counted 75 sheep. During the fire, wildlife managers and concerned citizens spotted dozens of the sheep moving around the fire in the Catalinas’ rocky terrain.

The desert bighorn sheep is one of several types of bighorn sheep in North America. Adults can grow up to 300 pounds. According to the National Park Service, because the sheep are sensitive to human intervention, weather and predation, they are sometimes considered an indicator of overall ecological health.

Hart says AZGFD would have conducted a helicopter survey last year were it not for the pandemic. However, the sheep were not always counted by sight. Bighorn sheep were reintroduced to the Catalina Mountains from 2013 to 2016. AZGFD moved the sheep in groups of 30 from mountains near Yuma, as well as Superstition Mountains.

“Historically, they were in the Catalinas for centuries. We know that from petroglyphs depicting bighorn sheep, as well as the fossil record. And with the advent of newspapers, we know there was a fair degree of market hunting. But we don’t think hunting caused them to disappear,” Hart said. “No one who’s actually studied bighorns in the Catalinas can point to one thing. We like to think fire suppression efforts over the years allowed habitats to get too dense for bighorns, which need clear lines of sight to evade predators. And then we had the Bullock and Aspen fires which burned much of the bighorn sheep management area.”

The reintroduced sheep were initially tracked via GPS collars. However, Hart says these collars only transmitted for two to three years. The herd ranged from 53 to 70, but some were lost due to mountain lions and pneumonia. AZGFD estimates their population in the Catalinas would have continued growing if not for drought conditions.

“Since the monsoon rains have come in, that has improved their habitat. But we’ll really see how much it’s improved their habitat about five years down the road. We still need monsoons, obviously, but it was very apparent when we were flying the survey how greened up the Catalinas already were,” Hart said. “It’s all about the weather. What the bighorns really like is new growth, and we have new growth on the mountain right now. That affects births and lamb survival. So we think the population only remained stable before the fire because of the drought.”

2021’s active monsoon season—the third rainiest on record—improved drought conditions throughout Arizona, particularly along the borderlands. As of June 15, the majority of Pima County was categorized as D4, or “exceptional drought,” the National Oceanic and Atmospheric Administration’s most severe drought label. During the heavy monsoon, no part of Pima County measured above D1, or moderate drought, with some corners of the county not even reaching drought conditions at all.

Hart says AZGFD may have actually counted more bighorn sheep during their survey if not for all the plant coverage as a result of this summer’s heavy rains.

“We may have had better numbers,” Hart said. “But given everything that has happened, we’re happy we have stable numbers.”