Sunny With a Chance of Rain 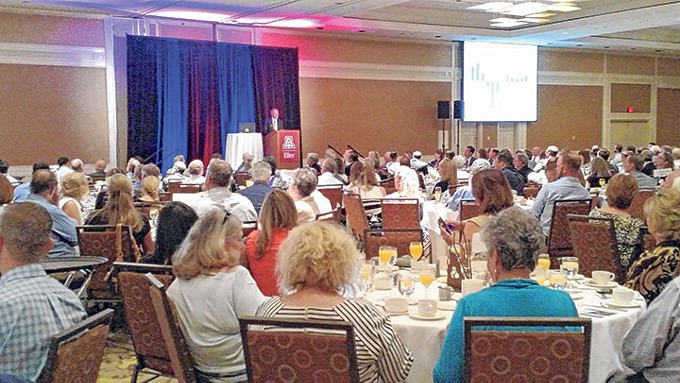 Nick Meyers
Attendees of the Eller College of Management’s Breakfast with Economists get an update on local, state and national economic forecasts.

Arizona's economy continues to rise in recovery of the Great Recession, but as always with economic forecasts, not everything is optimistic. Arizona still has a way to go before returning to pre-recession levels.

However, a strong dollar in conjunction with economic and social policies of the new administration raise some concern for international trade with Arizona's neighbor to the south.

Eller economist George Hammond, director of the Economic and Business Research Center, and Gary Wagner, vice president of the Federal Reserve Bank of Cleveland's Cincinnati Branch, took to the stage to outline the economic forecast of Arizona and the country for business leaders and government officials early Wednesday morning.

"Good economic information and good data is a little bit like a pickup truck," Hammond said. "You might not always want it, but some day you're really going to need it. And when you do need it, we're going to be there to support you in that high-quality information."

Hammond told guests Arizona's job growth rate remains steady at 2.6 percent, faster than the national average of 1.7percent, but slower than the decades leading up to the Great Recession.

Arizona lost about 317,000 jobs during the recession and has since replaced 370,000, mostly due to job growth in Phoenix.

"We're growing a lot faster than most states, but not as fast as we're used to growing," Hammond said.

Other indicators of economic improvement include an increase in wages, bolstered by the state's new minimum wage law, and increased real estate prices and permits. Hammond said that some housing markets around the country have returned to their peak nominal rates, but have yet to reach their real peak level.

Tucson's median wage has increased about $1,000 in 2016 to $34,000, which exceeds both national and state wage growth averages, but remains about $3,000 less than the national average.

Hammond said one factor that leads to lower wages is the educational attainment rate. The college attainment rate for individuals 25 years and older sits at 30.3 percent (up from 29 percent in 2009), which exceeds the national average. The problem, Hammond said, was that this figure includes retirees.

For the working-age population, college attainment rates sit below the national average.

"This is a big issue for Arizona, Phoenix and Tucson," Hammond said. "One of the things that reams of academic research have shown us is that states and local areas with high levels of highly-educated individuals tend to grow faster ... than in regions with lower levels."

On this front, Arizona has been losing ground, Hammond said.

Looking to the future, Hammond said Tucson has opportunities to grow with more federal activity in the country, particularly concerning defense spending.

Tucson's largest job growth has been in the tourism, healthcare and manufacturing sectors, a reflection of the arrival of new aerospace companies, which Hammond said will also contribute to wage rate growth.

The city has also seen some job losses. A particular concern of Hammond's was losses in professional and business services, which includes not only jobs like accountants, lawyers and call centers, but engineers and computer scientists as well.

"It's a bit surprising to see job losses here," Hammond said. "It's one of the reasons why we're a little skeptical about this preliminary data, so far—we don't generally see job losses in that sector."

Another unusual sector that has experienced some job losses has been trade, transportation and utilities. Hammond attributes this loss to changes in retail structure, due to both online retailers and the value of the dollar.

Hammond expects Tucson to maintain its job growth over the next few years with increases in tourism, defense, healthcare and a rebound in business services.

In terms of international trade, Hammond said it was good that the exchange rate between dollars and pesos has come down since the election, but a strong dollar has still decreased exports to both Mexico and Canada, Arizona's two biggest international trading partners.

Hammond identified four areas of policy from the new administration with potential to impact the impact Arizona's economy. The administration's stances on immigration and revising free trade policies set by the North American Free Trade Agreement stand to hurt international trade while stimulus provided by decreased taxes and regulation and increased defense and infrastructure spending will help the economy.

"What's not getting incorporated into most macro forecasts is the possible impacts on international trade and immigration," Hammond said. "Those are likely the top two of what I think are negative impacts on U.S. and Arizona and Tucson's economic growth."

For Tucson, that means slower job growth and potential job losses by 2019.