Citizens for Solar's Potluck and Exhibition

The fact that Arizona doesn't lead the world in solar power production and use is one of life's great mysteries. But that doesn't mean the sun isn't employed in creative ways around here. Citizens for Solar is holding its 32nd annual Solar Potluck and Exhibition on Saturday, setting up shop at Catalina State Park to showcase solar power and its many advantages. "We don't just promote solar cooking, we talk about everything," Citizens for Solar chairman Bruce Joseph said. "We are the longest continuously running solar event in the world." The potluck is open to anyone interested in using the sun to cook. Because it can take a while for food to be cooked with solar heating, participants are encouraged to show up at 10 a.m. so that their dishes will be ready for dinner around 5 p.m. Several speakers are scheduled while the meals are cooking, and live music will be performed at various times throughout the day on a solar-powered stage. Plug-in cars from the Tucson Electric Vehicles Association will also be on hand. And while the event is only on Saturday, Citizens for Solar has the use of three large group areas at the park from Friday through Sunday for people who would like to camp out. "Some people come from out of state and like to stay the whole weekend," Joseph said. In an effort to be waste-free, Joseph said visitors are encouraged to bring reusable plates and utensils. Admission is covered in the $7 fee for each vehicle that enters the park, where the potluck has been held for nearly 30 years. A raffle for solar cookers and other prizes will be held to raise money for Citizens for Solar's community project fund, which helped to install solar lighting at the park.

Things to Do, Wednesday, Jan. 1 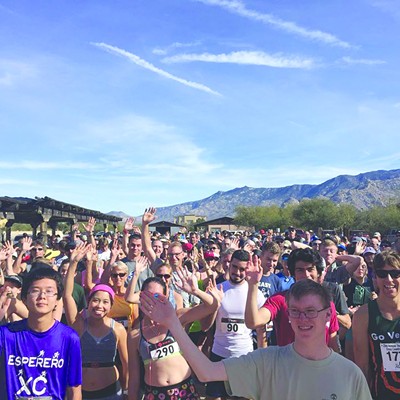 Roughing It With Chaperones

Get WILD This Weekend at Catalina State Park