Yes, you've seen movies with the same themes as The Way Way Back, but they didn't have Sam Rockwell

There are plenty of movies like The Way Way Back. Some have the same tone. Some have more or less the same story. In fact, this isn't even the best coming-of-age indie flick of the summer (that would be Kings of Summer). So why is this film one to see? Sam Rockwell.

Duncan (Liam James) is in the backseat of a massive station wagon, just waiting for the ride to end. The driver is his mom's new boyfriend, Trent (Steve Carell). While everyone else is sleeping, Trent asks Duncan how he sees himself on a scale from one to ten. A six, he finally musters. No, says Trent. Duncan is a three.

And so begins his summer at the beach house.

Duncan is a shy kid, the quiet type. He's sharing the house with Trent, his mom (Toni Collette), and Trent's daughter (Zoe Levin). The real action is next door: Boozy Betty (Allison Janney) is divorced this summer, so it's just her and her lazy-eyed son, Peter (River Alexander), and the as-luck-would-have-it-incredibly-pretty-girl-in-his-age-range Susanna (Annasophia Robb). Duncan would still rather be anywhere else. He has not taken his parents' divorce well and Trent is a dick, repeatedly and dickishly.

This has to sound somewhat familiar to you already: Awkward kid finds love and an escape next door. It plays that way, too. But not in the familiar sense that brings a smile and a nod of acknowledgment. It's just not terribly original.

That's also true of Duncan's only outlet in his summer from hell, the local water park. He stumbles into a job there and even gains some confidence and makes some friends. This is a lot like Adventureland, a movie that came out in 2009, and while that one featured Kristen Wiig in a supporting role as a carnival employee, here we get her former SNL cast mate Maya Rudolph as the assistant manager of the groaningly named Water Wizz.

Business picks up, however, when Sam Rockwell is on screen. This is what he does. The Green Mile, Charlie's Angels, Galaxy Quest, last year's Seven Psychopaths-they're all better because of Rockwell's uninhibited supporting work. He's a great lead actor, too (witness Confessions of a Dangerous Mind and Moon), but when it comes to stealing movies, there are very few in his league. You just never know where his punches are going to come from. As Owen, the manager of the water park, he's channeling Peter Pan and Bill Murray from Meatballs. It's an interesting stretch, but it's quintessential Rockwell.

Owen is a mentor for Duncan. Somehow, he's just drawn to the kid, perhaps because Owen has been there himself. He takes Duncan under his wing, gives him a job and a purpose, and coaxes him out of his shell. At the same time, he is a 40-ish man who lives in an apartment overlooking the entrance to a summer fun park; something tells us Owen never fully developed into a responsible adult. But the kid inside Owen helps bring out the kid inside Duncan.

Subplots and angles prove tricky for rookie directors Nat Faxon and Jim Rash. They collaborated with Alexander Payne on the script for The Descendants, and as is Hollywood's way, they were given a shot to direct after the success of that film. Two differences: That movie was based on a pretty good book and-oh-they were co-writing with Alexander Payne. Election, anyone? About Schmidt ring a bell? So Faxon and Rash get a little over their skis trying to manage the overly-messy home life with what should be a bumpier transition from awkward boy to more assured teen.

The Way Way Back is nostalgic and poignant and all the rest, but for a film that evokes Alexander Payne and Little Miss Sunshine and, in its own way, something like The Perks of Being a Wallflower, The Way Way Back never quite gets us all the way there. It's hard to believe the filmmakers couldn't find more for Steve Carell to do, especially since he's the only one making money here. A lot of what takes place in the third act is rather painfully revealed far too early. And Liam James is a little too reserved throughout; he's hard to connect to.

And yet, Allison Janney's rapid-fire entrance is terrific, Toni Collette is so perfectly fragile, and when the film is going for laughs, it gets them easily. All of that doesn't exactly balance the scales ... which is why Sam Rockwell keeps getting jobs. The film has a different language or melody to it when Rockwell takes over. It could use more of him, but he still makes The Way Way Back keep its head above water.

The Way, Way Back is not showing in any theaters in the area. 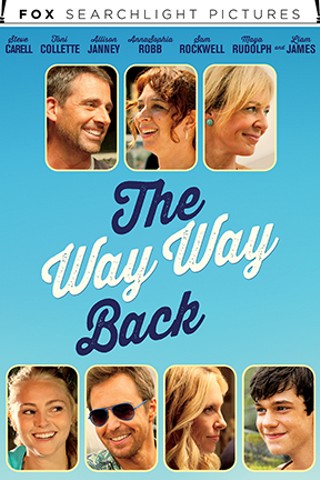