The Sonoran Desert is not what it used to be. Over the past century, invasive grasses have spread across the region and transformed the landscape from the familiar diverse desert to more of an arid grassland that is highly susceptible to fires.

Invasive grasses — from buffelgrass to red brome to love grass — have dramatically altered how fire can move through the desert. Places that used to burn once every 200 years may now be burning every 20 years because these grasses serve as a fuel source than can easily spread wildfires. They sprout up in places that would normally be barren, connecting otherwise separate patches of desert plants.

"You could make a case for saying the Sonoran Desert, as most people knew it, is extinct," said Mary Lata, a U.S. Forest Service fire ecologist. "We just can't keep pretending to manage the desert as if it's the same system that it was 80 years ago."

In a study published in February, researchers attempted to map social and ecological resilience to fires across the Sonoran Desert over the next 40 years to determine where land managers will need to intervene in order to protect the desert and human infrastructure. The study found that certain areas of the Sonoran Desert will have a harder time bouncing back after fire events. Land managers will likely need to rethink how to achieve desired management outcomes in these areas.

"It's really critical that we start to better understand the dynamics that drive recovery, as we have limited resources and more and more areas that desperately need our attention," said Dr. Clare Aslan, an associate professor at Northern Arizona University and lead author of the study.

Aslan and a team of researchers from NAU and Conservation Science Partners, a nonprofit research organization that seeks to develop solutions to large-scale environmental problems, mapped social and ecological resilience across the Sonoran Desert separately and later combined the maps to determine overall resilience—the ability of an area to return to its normal state after a disturbance.

The researchers mapped ecological resilience by determining the severity of the fire risk in the area, how quickly an area can bounce back without human interference after a fire, and what that area will look like when life blooms again. If enough change occurs within an area after a fire, the system can reach a "tipping point" and transition into a new state—like when a desert transitions into a grassland after a high intensity fire results in the death of native plants.

To map social resilience across the landscape, the researchers interviewed different land managers about how likely they feel they can continue to meet their management objectives in light of the projected fire risk in their jurisdiction over the next 40 years.

The researchers argued that high social resilience is defined by a manager's ability to continue to meet their objectives, even if that means they have to use new strategies to get there.

"A completely different set of objectives would indicate a really different social condition on that landscape—like you really can no longer ranch at all, so you're going to have to pick recreation. There might be some very different use for the land," Aslan said.

After mapping the combined social and ecological resilience, the researchers found that certain geographic areas in the region are likely to exhibit lower combined resilience, while other areas are likely to exhibit higher resilience. In some cases, this is driven by the social factors, like access to resources and flexibility within a given agency. In other cases, it's driven by ecological factors, such as the abundance of fuels in a given area.

For example, in the northeastern and eastern portions of the Sonoran Desert where elevation is slightly higher, there is an increasing abundance of fuels. On top of that, people frequently use these areas for recreation, so there is a higher likelihood someone will ignite a fire. The researchers determined these areas exhibit low resilience. Conversely, there are areas in the western portion of the desert where there is relatively low human density and a small number of fuels. In these areas, the land is more resilient.

Ultimately, more than half of the land mangers interviewed for the study reported they will likely need to come up with new strategies to manage their land in order to meet their objectives due to the increased fire risk across the desert.

Land managers with more resources, like the military and other federal stakeholders, feel more confident about their abilities to meet their objectives in the future. On the other hand, land mangers that seek to achieve objectives associated with conservation and the protection of cultural resources, like tribal stakeholders, acknowledged they will have a hard time achieving their objectives in the future.

While there is variability among land managers' abilities to respond to fires, there is a consensus among managers that both preventative and post-fire management activities will be necessary to protect the land moving forward.

"I think over the next 20 to 40 years, most people will continue to adapt and find ways to deal," Aslan said. "But I do think that once you start to get further out than that, it's going to get harder and harder."

Some of the Arizona hot spots that Aslan and her team identified as high risk in their modeling actually went up in flames after the models were produced, such as an area near Lake Roosevelt, roughly 11 miles north of Globe. In August of 2020, a lightning strike ignited a wildfire that burned almost 21,000 acres of Sonoran Desert grass and brush.

In recent years, the state of Arizona has experienced some of the largest fires in the state's recorded history. In fact, Arizona's 2020 fire season is considered one of the worst the state has ever seen with almost one million acres of federal, state and tribal lands burned.

Lata, who has worked as a fire ecologist for almost 20 years, explained that we are seeing such extreme changes to the Sonoran Desert's fire regime largely due to the spread of invasive grasses.

To make matters worse, climate change is exacerbating the spread of non-native grasses. Steadily increasing temperatures coupled with increasingly sporadic rainfall create the perfect storm in the desert where fine fuels and fires can thrive.

On April 5, the Pima County Board of Supervisors issued an update on their Invasive Species Management Process, stating that buffelgrass is a key threat in the Sonoran Desert.

"In addition to the ecological devastation that it poses, buffelgrass also has the potential to negatively impact the almost $I billion tourism industry in our region as well as public health and safety issues associated with increased fires," the update stated. "For this reason, Pima County's Office of Emergency Management highlighted the threat posed by buffelgrass in the County's multi-jurisdictional hazard mitigation plan... The current status of the buffelgrass problem in our region is largely unknown given the lack of data for some areas and because of the ever-changing extent of infestations in many areas. However, it is likely that buffelgrass is now present in every section (640 acres) of land in Pima County below approximately 4,000 feet elevation."

If the fire regime of the Sonoran Desert continues on its current trajectory, many of the desert's endemic species, including the iconic saguaro cactus, will struggle to survive. This is because Sonoran Desert plants are generally not well adapted to fire disturbances. They evolved in an environment where fires were not common, so they do not have the defenses to survive high-intensity fires. Invasive grasses, however, usually regenerate quickly after fire events.

Scientists and land managers generally agree that the fire disturbance cycle in the Sonoran Desert is out of whack, but there is a lack of consensus on how to address this problem moving forward. Moreover, there is a lack of knowledge on how changes to the fire regime are going to impact our social and ecological systems over the next century.

"To say there's a problem is putting it mildly," Lata said. "Fires are spreading faster and bigger than they ever would have, and more frequently. Those grasses aren't going back in the box, and we don't know how to get rid of them." 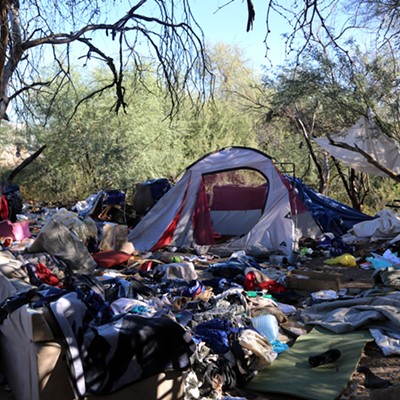