Hearts Beat Loud is a low-key gem of a movie 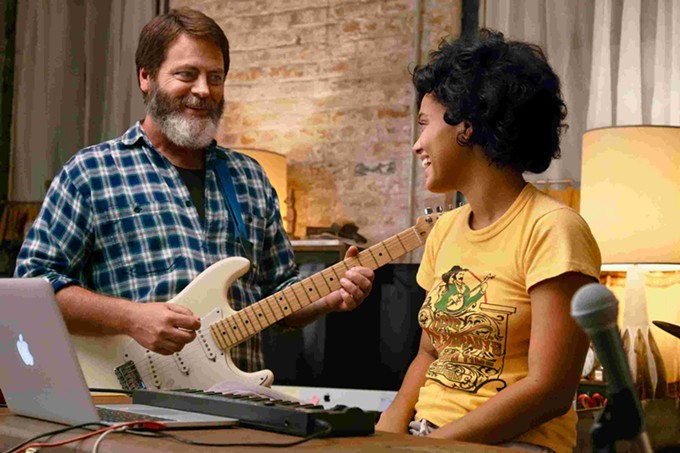 Nick Offerman and Kiersey Clemons make for a winning, inspirational father-daughter team in Hearts Beat Loud, a musically infused cinematic gem that will stand as one of the summer's under-the-radar greats.

Frank (Offerman), a record-store owner (mostly vinyl) with a gruff attitude, has fallen on tough economic times, not good considering his daughter Sam (Clemons) is about to leave for med school. He informs his landlord Leslie (Toni Collette, having a great year) that the store will be closing, and he's at a sort of spiritual crossroads.

He takes great solace and comfort in his mandatory musical jam sessions with his kid, both of them being decent enough musicians, with Sam actually being pretty damn good. She has a knack for songwriting but doubts her talents. Frank pushes her to create, marvels in what she's able to come up with and suggests they form a real band.

Sam pushes back, wanting to focus on the whole becoming-a-doctor thing, but Frank persists, ultimately uploading one of their demos to Spotify. He hears the song in a coffee shop one morning, and it's a great moment. As a testament to how the face of the music industry has changed, an artist hears his music streaming on somebody's "mix" rather than broadcasted on the radio in his car. The film is somewhat of an endorsement for Spotify and vinyl.

None of this would work if the music stunk. It doesn't. It's good. Offerman and Clemons combine for some sweet music making, including the film's title track, one that is repeated often in the movie. Offerman is no Hendrix, but he handles his guitar parts with enough finesse to make you think he's been playing a long time, and Clemons is a natural wonder with a great voice.

It must also be said that the people in this movie have great musical taste. The soundtrack and the characters reference a who's who of great artists, including Ween, Animal Collective, Jeff Tweedy, Spoon and Mitzki. It's the best music-store movie since High Fidelity.

Even more inspiring than the music would be a love story between Sam and new friend Rose (American Honey's Sasha Lane). Their relationship is depicted in a way that surprises in that it's allowed to happen without any discussion about it. It's just two people falling in love. The film's other love story, the bond between father and daughter and their musical adventure, is equally lovely.

Offerman, a successful comedic actor, has started making a case for himself as a dramatic real deal. He had a good costarring role in The Hero (2017), that recent ode to actor Sam Elliott featuring Offerman as a stoner. He also killed it as one of the McDonald brothers in The Founder. This time out, he's giving a starring role that allows him to show all kinds of range. The final look he gives his daughter in this movie is all kinds of priceless.

As the movie's true heart, Clemons boasts a beautiful singing voice to go with her solid acting chops. She and Offerman are strong enough here to overcome the moment or two when director and co-writer Brett Haley (who also directed Offerman in The Hero) drifts into obvious territory. The material is never bad, but there are moments that could've registered as a bit hokey if it weren't for Clemons and Offerman making them better.

Collette, who deserves year-end awards consideration for her barn-burning work in Hereditary, lends an incredible amount to the film in her supporting role, including a karaoke moment that reminds us that the actress can sing. Also, let it be said, that it's always a great thing when a production can coax Ted Danson into playing a bartender.

So, yep, real music, real love, and Sam Malone slinging drinks are contributing factors to Hearts Beat Loud being a resounding success for your Summer Movie Season. If Offerman and Clemons don't win you over with this one, you are some kind of super grouch.