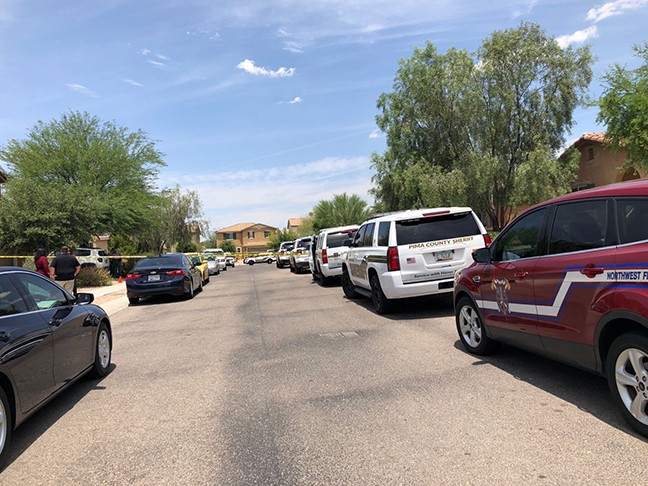 Courtesy Photo
The home where 19-year-old Raymundo Lopez Casillas accidentally discharged an AK-47 rifle and killed his 17-year-old nephew, Luis Lopez, last month.
Friends and family members of 19-year-old Raymundo Lopez Casillas have rallied to support him after he accidentally shot and killed his 17-year-old nephew last month. They describe him as a reserved, non-confrontational and harmless young man who made a mistake, but after hearing from a prosecutor who painted a more disturbing picture, a federal judge believes Casillas is still a threat to the community.

On June 7, Pima County Sheriff's deputies were dispatched for an "unknown problem" at Raymundo's house, a tan stucco two-story home located southwest of Mountain View High School. They were informed that Raymundo accidentally shot his 17-year-old nephew, Luis Lopez, with an AK-47 rifle. According to a search warrant, deputies arrived at the home and went upstairs to the den area, where they reportedly saw Luis lying on a couch, partially covered by a blanket. A green towel was soaking up blood behind his head.

Deputies reported they could not feel his pulse when they made contact. Northwest Fire Department officials treated Luis at the scene, but he was pronounced dead soon after. Officials found that his injury was consistent with a gunshot wound, which they believe entered from the back of his head and exited through his throat.

Raymundo told law enforcement officials he was alone in his bedroom when he accidentally fired the shot. He said he took the magazine out of the rifle and thought it was empty, then pulled the trigger. The bullet went through his bedroom wall and struck Luis, who was standing in the den.

There was a hole from a projectile in Raymundo's bedroom wall, which is adjacent to the den, that deputies say was consistent with the manner in which Luis was shot. In the bedroom, they found the AK-47 rifle, an AR-15 rifle, multiple handguns and ammunition.

After searching the property, deputies recovered a safe that they claim only Raymundo had access to. In the safe, they found a rocket propelled grenade launcher and four homemade PVC pipe bombs. Deputies also found at least eight guns throughout the home, including shotguns, pistols, semi-automatic rifles, a Thompson submachine gun and related ammunition.

Raymundo was denied release at a preliminary hearing last Thursday, June 27 and taken into custody of the U.S. Marshal. If indicted, he'll face charges of being in possession of destructive devices. He is not being charged for Luis' death.

"He's been very distraught over what happened, and he has sought therapy for what's happened," Juliana Ore-Giron, Raymundo's defense attorney, said at the hearing. "After what happened he wants nothing to do with any weapons, any guns, at any time in his future. He's been very traumatized by the situation."

She requested that Raymundo be released to his girlfriend and her mother, who volunteered to be a third-party custodian. The two were present at the hearing in support of Raymundo, along with a dozen of his family members and friends. Raymundo has resided in the Tucson area his entire life and is a member of the Pascua Yaqui Nation.

Ore-Giron said Luis' death was a "very unfortunate accident" and since that day Raymundo was staying at his girlfriend's house until his arrest on June 24 because being at the place where he shot his nephew is "traumatizing" to him.

Raymundo lived in the house with his mother, sister, her two children, Luis and a 3-year-old boy. His sister, Jessica Lopez, was home when her son was accidently shot.

Jessica told the court that she knew her brother owned some of the weapons recovered by deputies, but said he always kept them locked in a safe. She was not aware that he owned a machine gun or that he had constructed pipe bombs.

"My brother has always been a caring person, he lost his dad when he was 9 to workplace gun violence in California," she said in court. "So when he turned 18 and purchased his first weapon, we asked why, and (he said) 'I will not let what happened to my dad happen to you guys.'"

Jessica said Raymundo has never been one to pick fights or cause harm to other people. She told the court that she believes her 3-year-old son was never in danger of being hurt in the house, because Raymundo always kept his guns locked up.

"Him (sic) and Luis were so close, they were together every day," Jessica said, adding that Luis wouldn't want this outcome for his uncle.

After the death of his father, Raymundo became more quiet and wouldn't express his emotions, Jessica said. She felt that he needed help back then, but he never saw a therapist.

"I think it was just an experience, a hobby," Jessica said of Raymundo's interest in guns and other weapons.

Raymundo has no prior history of violence or criminality, however the evidence Assistant United States Attorney Ryan Dejoe brought against him was enough to convince Magistrate Judge Eric Markovich that he was a danger to the community and should be kept in detention.

Special Agent Matthew Owen with the Bureau of Alcohol, Tobacco and Firearms was at the scene on June 7. He testified in court that day, saying deputies found documents showing that Raymundo purchased the weapons, but none of them were registered to him in the National Firearms Registration and Transfer Record.

During the deputies' investigation, they found two journals in the bedroom and loft area where Raymundo resided dating back to January and February of 2016.

Ore-Giron objected to the contents being used as evidence in court, arguing that there wasn't sufficient evidence to prove that he wrote the words, and they were written more than three years ago.

The journals showed a darker side to Raymundo than how his family described him.

Owen recited passages aloud in court: "I'm a bad person, I think of murder, gore and fire, and in result I try not to make new friends 'cause I might kill them someday, because that's what humans do is kill."

Deputies also found a saber with a swastika emblem on the hilt, Nazi flags and a button that said "Join the KKK."

Owen told the court that Raymundo's neighbors said the teenager sometimes made large bonfires in the backyard of the house, where whole Christmas trees would be burned. They felt concerned about the fire spreading to the homes nearby.

"After (the neighbors) described the backyard scenes they've seen, we specifically asked them why they've never called Pima County at this point," Owen said in court. "They stated it was out of fear that the house might get burned down while they were inside. They stated that they were fearful that there would be some retaliation if they called."

However, the neighbors told Owen they never actually received any threats from Raymundo.

"The mere statement that his nephew's death has made him renounce all of these things is not enough to rebut the presumption," said Dejoe, who represents the federal government. "Every other piece of evidence that was presented today shows that the defendant does pose a risk to the community, to his family and to himself."

He suggested that Raymundo receive mental health counseling from within jail.

"The firearms are dangerous. This is an individual who had an unfortunate incident with one but hasn't used them in a way that was to harm people," Ore-Giron said in her rebuttal. "Once the items are all removed, there's really nothing about his character that would demonstrate that he's a concern to the community."

Judge Markovich agreed with Dejoe that Raymundo posed a substantial risk to the safety of others. He said that even putting conditions on his release wouldn't stop him from potentially reoffending.

"The history and characteristics of his mental condition, all the things that were testified to today, do not alleviate my concerns, really they heighten my concerns," Markovich said. "The only thing that's intervened is that somebody died. And that was being used as the reason as to why he's now changing his opinion." ■