Oro Valley mayoral candidate Nancy Young Wright once had the temerity to set up a table in an Oro Valley park to gather signatures for a referendum campaign to preserve Honey Bee Canyon.

Town authorities promptly cited her for violating the town's sign code, so Wright fought back in court, successfully suing Oro Valley officials for violating her First Amendment right to peaceably advertise her political perspective in the public square.

"I just decided I was tired of getting kicked around by these people," she remembers.

Wright, who comes from New Mexico ranching stock, isn't one to be muzzled, as her fellow members of the Amphi School District Governing Board found out when she was first elected in 1996. Once she started asking some questions about the district's land deals, board members started trying to intimidate her. But Wright continued to ask questions and slowly began unraveling a culture of corruption.

The resulting revelations were so unsavory that within four years, the superintendent of the district had quit, and the other four members of the board were booted out of office by voters, three of them in a successful recall election. Wright herself is now in her third term at Amphi, which has become a much quieter district in the last six years.

These days, Wright is again mixed up in Oro Valley politics, seeking to unseat incumbent Mayor Paul Loomis in an election Oro Valley residents are now deciding in using all-mail ballots that concludes on Tuesday, March 14.

Loomis, a Raytheon executive who is seeking a third four-year term, says that he's overseen the town's successful transformation from a sleepy retirement town to bustling bedroom community, with the number of residents doubling to roughly 40,000 in the last decade.

Loomis boasts that the town has become a regional player in groups like the Regional Transportation Authority and the Tucson Regional Economic Opportunities Inc.

But all that growth has brought its share of turmoil over vanishing desert, crowded streets and increased demands for services from residents. Although she's never sought public office in Oro Valley before, Wright has been in the thick of frequent battles with developers and council members to prevent the blading and grading of areas such as Honey Bee Canyon. In her mayoral campaign, Wright says the town needs more citizen input, less backroom dealing and better planning to preserve the desert that made Oro Valley attractive in the first place.

"I was sickened when they opened up the slopes on the Tortolitas," says Wright. "That was supposed to be protected. We now have homes on the slopes."

Loomis counters that the town has managed to conserve some sensitive areas while avoiding lawsuits from developers. "We've done much better than people realize," he says.

Wright argues that the town can do better still. To help balance the town's budget, she wants to create commercial impact fees and increase residential impact fees to better match the fees charged by the neighboring town of Marana.

"We're really missing the boat," she says. "Impact fees don't stop growth. It's just a way to help pay for it."

Loomis opposes changes in the current fees, preferring the current method of working with commercial developers to extract dollars for the town.

The most symbolic battle is over a recent town agreement with Vestar, a shopping-center development corporation. The Oro Valley Town Council agreed to rebate a portion of the town sales tax to Vestar if the company would build a 900,000-square-foot mall at the intersection of Oracle and Tangerine roads. The deal could be worth more than $20 million to Vestar over the next 20 years.

A citizen group, Stop Oro Valley Outrageous Giveaways, collected enough signatures to force a referendum on the agreement. Oro Valley voters will decide the fate of the Vestar plan on the same March ballot as the mayor's race.

Loomis originally voted against the incentive plan, saying it was too generous to the developer. But he now supports it, because, he says, it will bring needed stores, restaurants and fast-food outlets to Oro Valley, as well as additional sales-tax revenues.

Wright says giving more than $20 million away to a developer is a ridiculous subsidy, especially since the mall will likely be home to the same national chain stores that are already prevalent in the metro area, perhaps even Wal-Mart. She suggests the intersection is prime real estate that's bound to be developed without the tax break.

"It's just bad practices," Wright says. "There may be some instances where you want to do this, but this is way too much money."

Wright has been appalled by how Oro Valley town staff repeatedly rejected the referendum petition with legal arguments that didn't hold up in court. The town's unsuccessful legal fight against its own citizens lasted almost two years.

"It's disrespectful to the citizens," Wright says.

Loomis says the legal maneuvers were necessary, because otherwise, the town could have faced legal action from the developer. He adds that, as mayor, he was powerless to intercede.

"There never was an opportunity for the council to have any input on those decisions," Loomis says.

Wright, Loomis suggests, is living in the past.

"Nancy still has not accepted that things have changed since the '90s," he says. "Oro Valley has grown up."

Editor's Note: Hearts Will Be Glowing 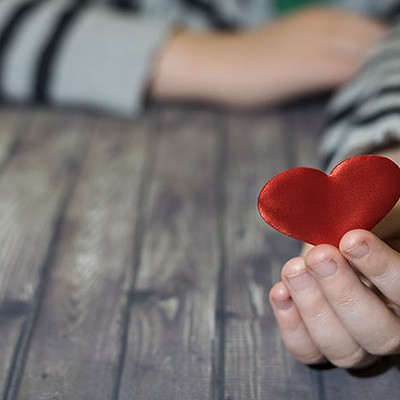