But it's not like an action film in that it's never dull. It's riveting, actually, which is weird, because as a film critic, I see a lot of movies, and most of the time, I get a little bored and start thinking about scenes I would have cut, or about how embarrassingly bad the expository dialogue is, or why it is that global warming denialists always speak in enthymemes that omit a patently fallacious major premise.

Or something, but something other than the director's intended focus for my attention. But in Milk, that only happened once, during the assassination sequence, which, sadly, is a little schmaltzy and plays too much like an old-fashioned Hollywood death scene. But other than that--and it's a minor quibble--Milk is a masterpiece of narrative filmmaking.

Which is interesting, because lately, director Gus Van Sant has made films that rely little on narrative, and much more on texture. But with Milk, he shows that not only can he put a story together; he can do it better than just about anyone working in film.

Of course, he has a particularly good subject to work with. Harvey Milk was the first openly gay man elected as a nonincumbent to public office in the United States, in 1977. That's pretty cool, really, since the vast majority of Americans at the time thought of homosexuals as in some way diseased, immoral or dangerous, and only a small percentage thought of them as sexy, delicious and/or potential lifemates.

But Harvey Milk radically decided that it should be OK to be gay anywhere. Realizing on his 40th birthday that living in the closet was not the most courageous approach, he quit his straight-world job, grew his hair out and headed to San Francisco with his boyfriend, where the love between two men was not only tolerated, but occasionally even celebrated.

Occasionally. Actually, it was frequently not even tolerated, at least not by the gay-bashers and homophobes who still made the city their home. Milk decided to fight that, so he opened a business, became a community organizer and then found himself leading a political movement for basic human rights. From there, he went on to public office and, tragically, to martyrdom, at the hands of a Twinkie-enhanced psychopath named Dan White, who just happened to be one of Milk's fellow San Francisco city supervisors.

The story is inherently compelling, but it still needed to be told well, and that's where Van Sant's genius shines. He understands far better than the Brett Ratners and Michael Bays of the world precisely how to weave a plot out of those elements that make us care about a character and an outcome. He does this while making every scene inherently interesting, at no point yielding to bald exposition or the kind of simplistic signaling that substitutes for story in too much modern cinema.

Van Sant has some high-powered allies in his project. Sean Penn is almost too good in the title role. He carries into the character nothing that marks him as Sean Penn: He's all Harvey Milk. He's well-supported by Josh Brolin as Dan White. Brolin's performance is a little cartoony, but if you've seen video of Dan White, well, he was a little cartoony. Brolin captures this but still gets across the anger and confusion that must have been sitting just beneath White's blank and bigoted exterior.

Also amazing, as always, is Harris Savides, who is easily one of the three greatest living cinematographers. Van Sant and Savides are careful here not to let the photography stand in front of the story; this is the opposite of the approach they used in their art-house films like Gerry and Elephant. This gives Savides a chance to show that he's also a master of the narrative style, with its emphasis on information. I would say that they should give him an Oscar, but I think he's too good for an Oscar. Instead, they should give him a magic ring that lets him summon dragons.

I could go on listing things that are great about this film, but I want to say one more time: well-constructed story. Excellent storytelling. No boring parts. Riveting. Story. Story. Story. And I want to say that, because storytelling is essential to movies that ask us to care about what happens next--a fact that seems lost on the people who made Quantum of Boredom and Speed Boredom and Star Wars Episode Bored: Return of the Expository Jedi. And those people spent a lot of money on their boring movies. Milk, with a budget of $15 million, delivers far more excitement than any 10 action-and-fart-joke films combined.

While Milk is clearly set up for some Academy Awards, I hope that people who like non-arty films--films about good and evil and explosions and love--will go see it, because it's not just Oscar-good; it's movie-good.

Milk is not showing in any theaters in the area. 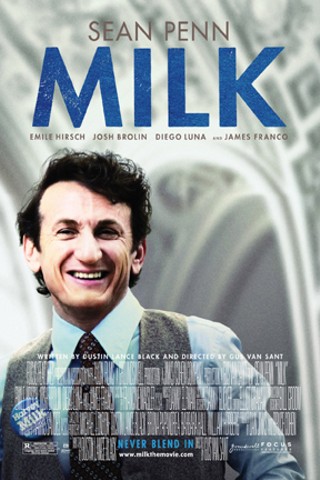