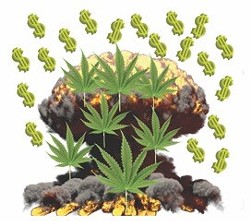 Arizona medical marijuana sales ended 2020 on a powerful high, even as voters legalized recreational use in November—and elected a president who has vowed to decriminalize pot.

Whether it was inspired by patients being shut-in during a global COVID pandemic, or getting in some practice for the rush of legal recreational weed that should be hitting the shelves soon, the MMJ business had a bellwether year.

Starting with a lock-down purchasing binge that took place in March, 2020 saw a sustained increase in business that continued each month through the end of the year, setting a record for weed sales since MMJ was legalized in 2010.

Whatever the reasons behind it, last year Arizonans purchased 211,556 pounds of various forms of legal cannabis, nearly 106 tons, a significant increase from 2019, which weighed in at 165,722 pounds or almost 83 tons.

That was also nearly double the amount sold in 2018, which totaled about 61 tons.

Even after voters passed Prop 207, applications for MMJ certificates continued at an impressive pace. There were 3,500 new license applications statewide in the month of December, bringing total applications for the year to 154,580. More than 61,000 qualifying patients renewed their licenses over the course of the year, and 28,562 patients were approved in Pima County.

Given the massive change coming to the marketplace, many believe the medical cannabis portion will maintain its economic heft in a sector that is expected to generate more than $1 billion annually once the recreational market adjusts in about three years.

Robinette cites tax rates and possession limits as factors, as MMJ patients in Tucson will pay about 8.7% in state and local taxes, while recreational will see a 16% tax rate right off the top.

"Myriad patients simply cannot afford that extra cost with regard to purchasing their medicine," Robinette said.

MMJ patients also have employment protections not afforded to recreational users and don't have to deal with a potency cap on adult-use edibles that limits a package to 100 mg with 10 mg servings, and will still be able to possess up to 2 1/2 ounces of marijuana as compared to one ounce with adult-use.

"Given these differences between medical and adult-use, I just don't see a massive migration of patients over to the adult-use market," he concluded. "Therefore, I feel that the medical program will continue to flourish within the overall legalized market in Arizona."

How do we get seeds for our Victory Gardens? A Weedly reader recently emailed to ask how she might be able to acquire seeds to start her own "victory garden."

Since many aspects of the legal structure pertaining to recreational pot are still being laid out by AZDHS, the legality of acquiring seeds and starters for home growing are murky and not specifically addressed as of this writing.

Roopali H. Desai, a partner at Coppersmith Brockelman, a Phoenix-based law firm that was primary author of the initiative, says the language of Prop 207 would not allow the transfer of plants, unless they are gifts from the grower.

"The adult use statutes and related proposed rules issued by the AZDHS are silent with respect to the sale or transfer of seeds," she said. "However, Proposition 207 (at A.R.S. Section 36-2852) specifically addresses the transfer of marijuana plants. Under that statutory provision, transferring up to six marijuana plants is legal to a person who is at least 21 years of age, but the transfer must be without remuneration."

So short of the AZDHS creating rules to specifically allow sale of marijuana "starter kits," at this point in time, home growers must rely on gifts or online "seed banks," remote purveyors of cannabis seeds that are mostly located outside of the state. The seeds can be expensive and are vulnerable to confiscation should the U.S. Postal Service determine what they are.

That said, some dispensary owners believe the rules are murky enough to allow sales and that AZDHS will not bother with enforcement if things remain the way they are.

This is due in part to the definition of "marijuana" laid out in the Prop 207 that reads in part, "all parts of the plant of the genus cannabis, whether growing or not, as well as the seeds from the plant."

"We are allowed by definition," said Moe Asnani, owner of Tucson's Downtown and D2 dispensaries and co-founder of iLava. "Do we plan on doing it on day one? Probably not."

So for now, find a friend who grows good weed and is willing to share, or do substantive research online to find the best seed bank option. Or wait a few days for things to change again, as AZDHS has until April 5 to put all the statutes in place.

Are we in for MORE from the Biden Administration? Last September, the Weekly reported on the passage of House Resolution 3884, the Marijuana Opportunity Reinvestment and Expungement Act, a federal attempt to "decriminalize and deschedule cannabis, to provide for reinvestment in certain persons adversely impacted by the War on Drugs [and] provide for expungement of certain cannabis offenses."

The MORE Act was introduced in September 2019 by Rep. Jerrold Nadler (D-NY), was passed through the House with a large majority, but ran into the Mitch McConnell wall in the Senate.

The House once again passed MORE in December, but given the political turmoil in post-election America and the hold Republicans had in Senate, it has been languishing in limbo.

But given the new makeup of the Senate—50-50 with Vice-President Kamala Harris representing a potential deciding vote—there is a possibility MORE will come back this year with a reasonable chance for success.

"This change in leadership holds important implications for federal marijuana policy reform and paves the way for the 117th Congress to potentially approve legislation to repeal the nearly century-long federal prohibition of cannabis," stated a recent NORML press release.

NORML hopes the Biden Administration makes MORE a priority within its first 100 days, as VP Harris was a Senate co-sponsor of the bill.

"Under a Biden-Harris administration, we will decriminalize the use of marijuana and automatically expunge all marijuana-use convictions, and end incarceration for drug use alone," Harris said in a September town hall event on ABC television. "This is no time, from our collective perspective, for half-steppin.'"

The Weedly holds out hope, but will not be holding its breath.