Marana will not shut down the cherished Thornydale Elementary 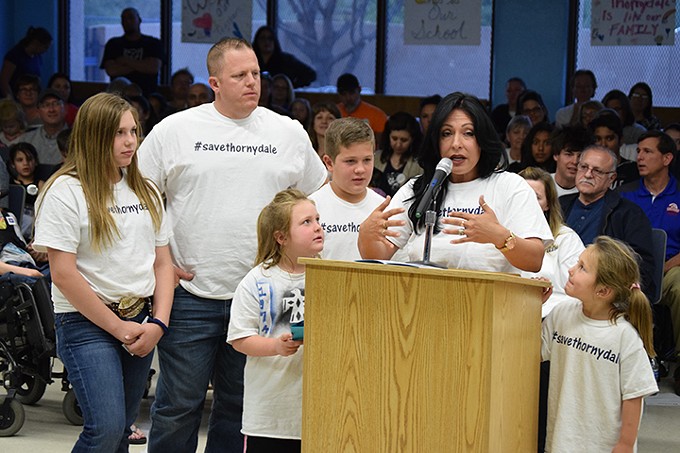 Danyelle Khmara
Nicole Pogue and her husband both went to Thornydale as children. At the March 27 Marana Unified School District Governing Board meeting, she said if the school were to close, she would take her four children out of the district.

For a tense 70 seconds, Thornydale Elementary was a goner. After a roll call vote on closing the community school, Board President Tom Carlson stated the results: 3-1 in favor of the closure.

They adjourned the meeting. People in the crowd of more than 200 began to shout. "You guys just killed a tradition, a legacy," yelled one man. The crowd began to chant "Vote them out" as a murmur began among the board members. Then Carlson said into his microphone: "I thought it was 3-1. It's 2-2?"

Board Member Suzanne Hopkins' vote was counted wrong. Along with Board Member Dan Post, she voted against closing the school. A cheer echoed through Marana Middle School, where the April 12 MUSD Governing Board meeting took place.

Since March, the MUSD Governing Board has been weighing the possibility of the closing the K-6 school on North Oldfather Road, just north of West Ina Road. For years, the school has had declining enrollment, which the district attributes to a maturing neighborhood, noting there are no new home developments on the horizon.

Hopkins left the board meeting immediately after the vote, denying the request for an interview. Grateful families filed up to thank Post, who had spoken out against the school's closure just prior to the vote.

He had said while he sympathizes with the families who love the school, he opposes the closure for more practical reasons. He said the board made some poor financial decisions with the 2014 voter-approved $125-million school improvement bond.

"Our needs now are for a new school that serves both the Gladden Farms and the Estes Elementary population," he said. "We spent that $100 million, and we don't have any left. So I think we've been bad stewards with that bond money."

He also brought up the Desert Winds Elementary School, in the Picture Rocks area, which the district closed at the end of the 2015-2016 school year because of declining enrollment. The board hasn't made a decision on what to do with the empty school, and maintenance of the building remains an expense for the district.

Post was concerned that there was nothing in the current motion that said what would happen with Thornydale if it closed.

More than 100 parents at Thornydale said they would pull their children from the MUSD district if the elementary school closes, which would take education funding—based on per pupil spending—out of MUSD. Post said he wants to give the school two more years to see if the enrollment numbers increase.

Thornydale enrollment has declined from close to 500 students to just over 300 over the past eight years. According to MUSD Superintendent Doug Wilson, the average per-pupil expenditure at Thornydale is $6,197; that's $1,472 more than other MUSD elementary schools, which comes out to $461,000 more annually. As well, state cuts to education funding contributed to MUSD leadership's recommendation to close the school.

"We have a fiscal responsibility for all of our students throughout the district," he said. "It's not easy to bring this recommendation, but it's based on lots of discussion."