Steel, Crochet, Plastic, Clay, A Day at the Sculpture Tucson Festival: Taking in the many mediums and approaches to art at the largest outdoor sculpture show in Arizona 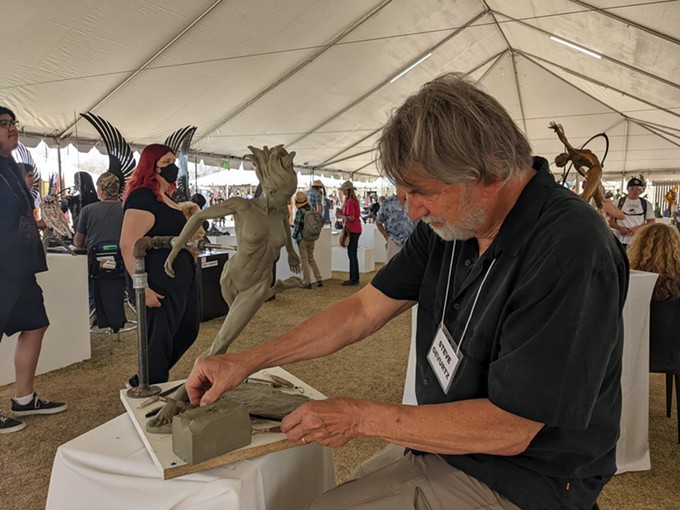 Megan McCarter is a mom who works 40+ hours a week at a construction company, but, instead of sleeping, she likes to put her BFA in sculpture to work by welding one-of-a-kind art pieces. Her recent work explores themes like infusing femininity into metalwork, or using oxidation to represent how humans change. Her piece, “Feel Free to Shake My Hand” has both of these: fan oxidized head, the suggestion of a feminine torso, and one long arm with spindly phalanges resting on the base. You thank goodness for the title when you see it, because, especially after two years of trying not to touch things, the urge to shake the statue’s hand is near-irresistible.

McCarter was displaying her pieces at the Sculpture Tucson Festival Show and Sale earlier this month, along with 44 other artists.

It occurs to me, strolling through Brandi Fenton Park, that one thing that makes sculpture art fascinating is its abundance of medium options. You can build a sculpture out of metal or wood or stone, yes. But you can also make sculptures out of musical instruments (Carlton Bradford), or seashells and shotgun shells (Ralph Prata), or little empty bottles of Fireball whiskey, apparently (Jimmy Descant). The other thing that sticks out is how the sculptures, well, stick out. They’re not afraid to take up space, and they don’t need function or small size or a place on the wall over the mantle to justify their existence.

“I’ve never, ever made anything utilitarian, ever,” says Timothy J. Arand-McIlrath, who is selling pieces that combine matrices of colorful glass with crochet and weaving. You can tell they’re influenced by the basketry background he tells me about, but they make me think of tide pools, or neurons firing synapses.

“Why are you so against making anything utilitarian?” I ask. He’s not, actually.

Arand-McIlrath, who wears multicolored glasses that match his rainbow striped shirt, has a master’s degree in fiber arts from back in the ’60s, and he spent more than 20 years as an art professor at Iowa State University. That’s another lovely thing about art. You can spend years and years studying it, learning about the best way to do it. Or you can just decide to start doing it, and teach yourself along the way. Maybe this is true of all creation—I think about how some parents read books and take parenting classes and have degrees in childhood development, while others just sorta go for it.

When I approach Steve Gevurtz, he hands me a packet of information about how, after 30 years as a business executive, he suddenly decided to become an artist, taking classes, attending workshops and visiting art academies in Europe. He’s very kinesthetic, he says. So, he fell in love with sculpture. He works with models on his stunning bronze figures, of women dancing or leaping, arms outstretched. I watch for a bit while he works on the clay for his newest piece, “Lady Corona”—his portrayal of COVID-19 as a woman, racing across the countryside in total joy and terrifying efficiency.

Bronze sculpting is an exercise in patience. When Gevurtz is done with the clay piece, he’ll cut off the limbs, and then make separate molds for each of them, as well as the torso. They’ll each be filled with molten bronze and then all welded together for the finished product. It seems fitting when he tells me one of his most recent pieces was based on something he read somewhere (likely Chris Guillebeau): “Life isn’t about the pursuit of happiness. It’s about the happiness of pursuit.”

In contrast, Kevin Caron jokes he chose 3D printing as a medium because he likes that the machine does all of the hard work, leaving him to focus on the imagining. Entirely self taught, Caron became an artist in 2006 after gigs including the military and working at an import car garage. He makes colorful, whimsical shapes that come from his dreams. They look like plants, sea creatures, optical illusions, pillars for palaces built on the tops of clouds.

“It’s a trip through the fantasy land for me,” he says. “My work is just a flight of fancy.”

You can follow some of these artists on Instagram! @megansmetal, @jimmydescant, @artguyiowa1 (That’s Arand-McIlrath) @stevegevurtzsculpture and @kevincaronart. And you can follow me on Twitter at @emfurd for more dispatches from the Sculpture Fest and beyond.