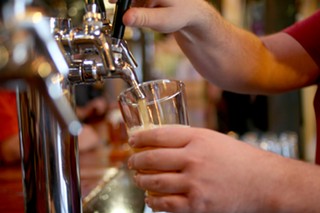 Seeing as how "Arizona Beer 10 or So Days" doesn't have a particularly nice ring to it, it's understandable why the name doesn't quite paint the full picture of the scope of this celebration. If Beer Week is anything like the craft beer industry itself, it's likely that in a couple more years this event will span the entire month of February, but hey—that wouldn't actually be so bad. Although the whole event features tons of smaller events all over the state, these are the top Tucson-area options each day that you won't want to miss if you're a real beer geek.

Candy addicts and insufferable hipsters, listen up. Sentinel Peak is releasing a beer made with real peanut butter cups. However, there's such a small amount of this brew made that it will only be served for two and a half hours in six-ounce pours per person. Talk about fear of missing out.

Authors Krista Schlyer ("Continental Divide") and Todd Miller ("Border Patrol Nation") will be in the Borderlands brewhouse to discuss their new books. The $5 ticket price goes to benefit the Sierra Club Borderlands Campaign.

It's not like you have to go up to Phoenix for the 15th Arizona Strong Beer Festival on Saturday, but be advised: a lot of the beer community both in and out of state will be there. By a lot, I mean about 150 different breweries—just try to wrap your noggins around all of that upper ABV beer action.

Sample some of the best this California-based brewery has to offer, including Lil' Opal, Bretta Weisse and their special 18th anniversary brew.

For those looking to learn to brew on their own, this demo is a must-see presentation of what you'll need to know to get started.

Beer on the screen and beer in your glass—a perfect pairing. Before the classic 1983 beer movie featuring Rick Moranis and Dave Thomas starts playing at 7:20 p.m., you can hit up the Loft's patio for samples poured by Golden Eagle Distributors, Pueblo Vida, Iron John's and Borderlands.

What happens when breweries Ten Fifty-Five and Pueblo Vida join forces with bartender Ciaran Wiese? Well, there's really no way to know until you get there, but chances are it'll be delicious.

Women in Craft Beer Panel and Tasting at Tap + Bottle

If you think beer is a man's game, think again. A panel of talented and knowledgeable women will lead you through tastings and discussions on the industry with a meet and greet after.

Check out the release of the Tucson collab IPA called Mic Drop. With beers from each brewery on tap as well as the brewers themselves there to answer questions, there'll be plenty at this event to satiate your local beer geek out.

Sip your way through a flight of brews centered around a special ingredient. Then you can be the judge if Pueblo Vida, Dragoon, Borderlands or Ten Fifty-Five takes the crown. Game on.

After a long week of drinking beer, it's likely you'll want to take it easy—or, instead, you can march around downtown with a bunch of other beer enthusiasts and industry folks tasting craft drafts from 20 different breweries and seven stops. Sample your favorite local brews and some exciting rarities at R Bar, Hotel Congress, Tap & Bottle, Borderlands and more with your own commemorative sampling glass. Tickets are $38 in advance or $45 the day of with benefits going to the Watershed Management Group.