While not completely devoid of fun, it doesn’t live up to other Marvel Universe flicks 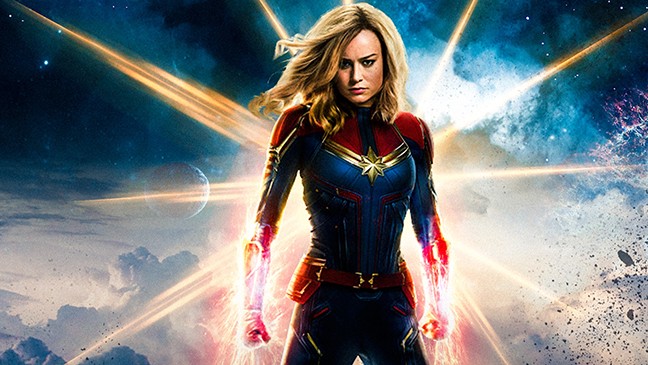 It looks like somebody forgot to tell Brie Larson to have fun and let loose in Captain Marvel. Her turn as the title character, AKA Carol Danvers, is one laced with lethargy and bizarre line deliveries.

Samuel L. Jackson and an orange tabby seem to be in on the notion of being in escapist fare, but Larson is stiffer than Church the cat on the Creed's front lawn after his unfortunate encounter with a speeding truck. (Say, is my excitement for the upcoming Pet Sematary reboot evident?)

A similar problem plagued Larson in Kong: Skull Island. The Academy Award winning actress seems to be in her wheelhouse when the budget is low, but seems miscast when the title of her movie is synonymous with blockbuster. She gives off a detached vibe that she just doesn't want to really be in the movie. It's odd. The movie should be called Captain Meh-I Dunno...I Got Better Things to Do.

Had the movie around her been really good, her seemingly bored disposition might've been forgiven, but Captain Marvel is also riddled with awful special effects and some haphazard storytelling.

I went in hoping for a badass movie about Captain Marvel but found myself more intrigued by the subplot involving an up-and-coming, low-ranking S.H.I.E.L.D. agent named Nick Fury, played by Jackson. Honestly, the de-aged Jackson in this movie, along with a returning Agent Coulson (Clark Gregg), who died in the first Avengers movie, are so good you wish they got their own film.

I'm not putting the blame for Danvers as a character solely on Larson. The character itself is a bust when it comes to superheroes. All she does is fly around and send out energy bursts from her hands. She has moments where she goes full Marvel mode, and this brings on some sort of light show where she glows, gets white eyes, and a goofy looking mohawk. As for superpowers, hers just don't register as anything all that exciting.

The Marvel light show isn't aided by the special effects, which look rushed and cartoonish. Captain Marvel in her full glory doesn't integrate with the worlds around her; she looks animated and out of place. It reminds of how bad the villain Steppenwolf looked in Justice League. It takes you right out of the action.

As for the orange tabby named Goose, he's your basic super cute cat with a few surprises under his fur. Again, the special effects are a letdown when Goose goes full Goose, another example of the visual team coming up short.

Part of the film is set on Earth in the '90s, which lends to Jackson's Fury having a full head of hair and both eyes. It also lends to music by Nirvana and No Doubt, both of which are used in situations that feel awkward and forced. Directors Anna Boden and Ryan Fleck get a little carried away in their efforts to be cute with the tunes.

There's a big supporting cast, including a strong Annette Bening as a scientist and murky memory in Carol's dreams. Lashana Lynch does good work as Maria Rambeau (pronounced "Rambo!"), an earthly friend of Carol's. Jude Law gets a change of pace with an action role as an alien named Yon-Rogg, while Ben Mendelsohn plays Fury's S.H.I.E.L.D. boss, another character with a few surprises to offer.

The film isn't 100 percent void of fun, it's just not on par with other Marvel Universe offerings. That's a high bar to hit. As for Captain Marvel, the end of Avengers: Infinity War hinted at some major participation for her, so this is just the start for the character and hopefully things get better. As always, stay ALL THE WAY through the credits. There are plenty of things happening in the credits scene that you won't want to miss, even if you've had your fill with the events that happened before all those words splashed across the screen.