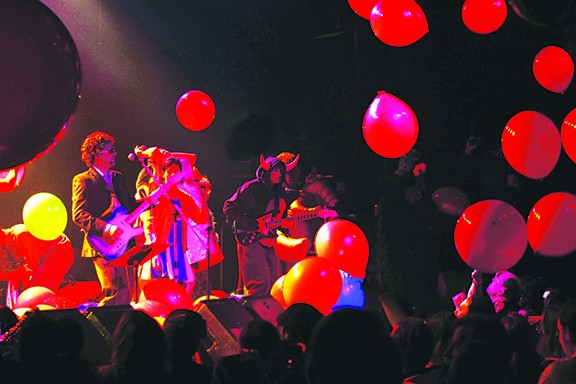 Cynthia Elliott
Calexico performing at The Great Cover Up

Thursday, Dec. 12, through Saturday, Dec. 14
7 p.m. each night
191 Toole & Club Congress
$8 for one night/$15 for all three nights
191toole.com & hotelcongress.com
The Great Cover Up is celebrating its 21st anniversary much in the same way it always has: getting dozens of local musicians to cover the songs of big-name acts like The Clash, Dolly Parton, Guns & Roses and The Doors. But just because the format is the same doesn't mean the show is any less labor-intensive or meaningful, for audience or performer.

This year, 26 Tucson-based bands are covering famous artists over three nights at 191 Toole and Club Congress. While Oct. 11 was the deadline for local musicians to apply for the show, some rehearsals began months prior.

Local bands participating include The Bennu, Miss Olivia & The Interlopers, Fitter Happier, Eric Schaffer & The Other Troublemakers and Southbound Pilot. The covered artists include Janis Joplin, Sex Pistols, R.E.M., Tom Waits, The Pixies and Linda Ronstadt, although to preserve a sense of surprise, the audience doesn't know who is covering whom until the night of the show.

There are essentially two schools of thought when it comes to a Great Cover Up show: copy a musician's style as accurately as possible, or have a completely unique take on it.

"It's got to be whatever fits your band," says Nick Prevenas, six-time Great Cover Up performer. "If you're setting out to do an accurate note-for-note cover, you have to go all the way and get the costumes and look up how the guitar tone sounds. The verisimilitude is important if you're trying to do note-for-note. But I've always been a fan of when bands do their own interpretation and go all-out with the biggest party imaginable."

For Prevenas, no Great Cover Up show is as memorable as the 2006 set when Paul Jenkins of ...music video? covered Bjork songs while wearing the Icelandic singer's iconic swan dress.

Costumes and stage props are a frequent bonus to Great Cover Up sets, and a tradition that punk band Taco Sauce are happy to continue at their show this year.

"If you've ever seen Taco Sauce, you know outfits are a big part of what we do," says singer/guitarist Gabi Montoya. "So we're definitely going to dazzle with our outfits and pay homage to the era we're covering. I think when people see who we're covering, they're genuinely going to be surprised. So I'm really excited to see that first reaction from the crowd."

Just because they'll wear outfits doesn't mean Taco Sauce is compensating for musical accuracy. Montoya first performed in the Great Cover Up with Juju Fontaine last year, and now that she has a better understanding of how the show works, she says she's inspired to take her own performance up a notch.

"This year, I'm putting way more work into learning every inch of those songs. I'm pretty much learning every guitar line myself. It's a lot more work this year for sure," Montoya says. "I feel like we're doing a pretty good job of walking the line; honoring the songs that people are going to want to hear the way they remember, but it's also going to sound like Taco Sauce... We're going to try to honor those artists but also try to add our own flair into it."

For Joshua Butcher, singer in The Muffulettas and singer/guitarist in Little Cloud, an entertaining cover set is more important than exactly copying a band. Butcher has performed at the Great Cover Up three times, and will perform cover sets with both bands this year.

"The theatrics are a big part of what we do. We don't want to get up on stage and just play the music, we want to play the part, that's why we pick who we pick," Butcher says. "I perceive it as our band is trying to cover someone else, but not trying to be someone else."

As a way to give back to the community, every Great Cover Up selects a beneficiary. This year, all proceeds go to KXCI 91.3, Tucson's community radio.

"The reason I think this event is so fun is because everyone is a fan," Prevenas says. "The fans in the crowd and the people on stage are all equally fans. It's kind of a cool, democratic concert experience where everyone is sharing their fandom. It's a night unlike any other we have in Tucson. It's such a cool thing that Stephen Seigel brought here and Mel Mason keeps alive. It's an unbelievable amount of work they have to put into this. And the fact she's coordinating this thing year-after-year is outrageous. This event would not happen without the tireless efforts of those people."

"Being musicians, we have a lot of friends in these bands," Butcher says. "So for us, it feels like our end-of-the-year holiday party. That's when all the musicians and fans come together and wrap the year up. We get to see each other do different songs, but we also get to just be with each other. It's definitely more than just a cover show to us."