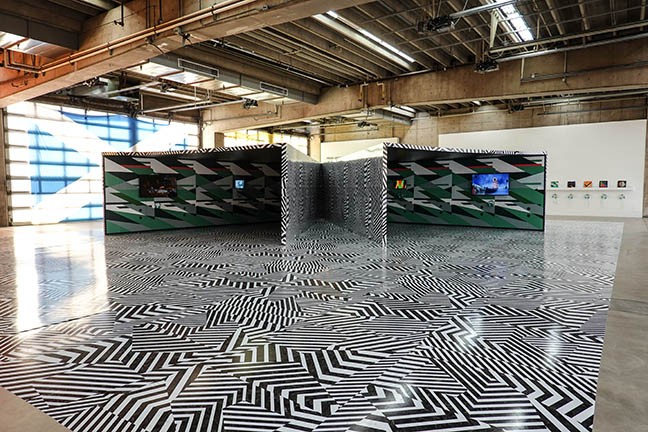 See for yourself at MOCA Tucson. The current show, Dazzled: OMD, Memphis Design, and Beyond, is all about an art form nicknamed razzle-dazzle that was inspired by—wait for it—painted designs on World War I battleships.

Bear with me here. During the war, Norman Wilkinson, a clever English marine artist, came up with a novel way to protect the nation's ships from their German foes. Instead of sending out those U-boats in gun-battle gray, Wilkinson had the British navy paint them in outrageous geometries, in fat stripes and cascading triangles, sometimes in black and white, other times in bright color. Each ship had its own pattern, as unique as a snowflake or human fingerprint.

The dazzle camouflage was meant to confuse the enemy. The idea was that it would be hard for a German naval captain to get a read on a warship that looked like a giant floating Escher optical illusion or a wacked-out Dada painting.

Sadly, the razzle-dazzle boats were not a big military success. But artists took note: the MOCA show contends that dazzle camouflage has had an important influence on art and design and pop culture.

The huge Great Hall at the museum dazzles—or dizzies—with giant installations as bold and brilliant of those on the ships of long ago. In Natalie Lanese's big walk-in work, painted zig-zag bands in tiger orange and flaming yellow careen maniacally along the walls.

The most amazing piece, "Dazzle Ships," mimics the cover of a 1983 album by the band Orchestral Manoeuvres in the Dark. It's a ship-size funhouse gone mad in black-and-white, with stripes zipping hither and yon in directions that defy the laws of physics. Walk inside and you might feel like you've stepped into a mad fantasy ship—or fallen down Alice's rabbit hole. Through April 13; moca-tucson.org.

The city is bursting with exhibitions this spring, in the museums, in the established galleries and in the off-the-grid start-up spaces that pop up with astonishing regularity. Here's just a small sampling of shows around town that shine.

At the Tucson Museum of Art, the work of Cuban artist Carlos Estévez is dazzling too, if in a different way. Taking up much of the museum, Entelechy, Works from 1992 to 2018 has everything from carved figures to a miniature ship of fools overrun with paper-doll movie stars to an 8-foot mandala-like disc bristling in dizzying circles and intricate lines. Estévez paints, sculpts, draws, prints and even sews. It's not surprising to learn that "entelechy" is derived from a Greek word for the "transformation of an idea into a realty." Through May 5; tucsonmuseumofart.org.

Also at TMA, photographer Patricia Carr Morgan has hung translucent blue cloths from the rafters in her one-person show Blue Tears. Each billowy curtain is imprinted with blue-toned images from the cold lands of Greenland and Antarctica, both of them threatened by global warming. Through April 21.

Over on the UA campus, the Center for Creative Photography is marking Ansel Adams's 117th birthday with Ansel Adams: Examples. The exhibition is inspired by a book Adams wrote explaining his choices in making 40 of his photos, including the lovely "Church and Road," c. 1953, where the tall white steeple is nearly dwarfed by the curving dirt road. CCP will display this work and others that appeared in the book, and pair them with Adams's own text. Maybe his words will tell us exactly why he made that church so small and the land so big. Through May 3; ccp.arizona.edu. The public is invited to a free birthday celebration from noon to 4 p.m. Saturday, Feb. 23.

The spectacular Richard Avedon: Relationships show remains up at CCP through May 11. Some 80 works, both portraits and fashion shots, bring back celebrities, politicians, painters and con men of the 60s to the 80s. Talk about dazzle. Look for Kareem Abdul Jabbar as a 16-year-old basketball wonder. Through May 11.

Across the way at the University of Arizona Museum of Art, six scientists and six artists teamed up to make six art installations about the Sonoran Desert and the Gulf of California. This innovative show, 6&6, teaches us not only about the geologic history of these cherished places. It also looks at the path traveled by Tucson's Rillito, the marine richness of the gulf and today's threats to its sea creatures.

At UAMA you still can't see "Woman-Ochre," the stolen de Kooning painting that was returned in 2017 (it needs restoration). But at the Arizona History Museum you can commune with another recently recovered painting.

"Freedom from fear Reprise," an oil by Cheryl Berech, was stolen from Etherton Gallery, where it was hanging in a show celebrating the Arizona ACLU's 60th anniversary. A thief spirited away the sweet painting of a sleeping migrant child in January; two weeks later, the suspect returned, demanding a receipt. The intrepid Etherton staff stalled him until the police arrived to arrest him, and the painting was soon delivered safely back to the gallery. The intact show has moved on as planned to the Arizona History Museum, where it will remain through March 5. arizonahistoricalsociety.org

The Arizona State Museum continues two comprehensive exhibitions on the Hopi. Made possible by 30 years of archaeological excavation, Life Along the River: Ancestral Hopi at Homol'ovi uses artifacts, maps and the voices of Hopi people alive today to conjure up 1300s Hopi life in northern Arizona. The Resiliency of Hopi Agriculture: 2000 Years of Planting is a photography show guest-curated by Michael Kotutwa Johnson, Hopi farmer, photographer, and UA Ph.D. candidate. Through June 29; statemuseum.arizona.edu. Also on campus, at the Joseph Gross Gallery, beacon of cutting-age art, Adrian Esparza explores his Mexican-American identity in I-10, pairing traditional drawings with wall installations made with threads unraveled from Mexican serapes. Through March 7; art.arizona.edu.

At the Tucson Desert Art Museum on the eastside, EFFIE! Plein Air Pioneer resurrects the career of early Arizona painter Effie Anderson Smith (1869-1955). Living in the rough mining town of Pearce in Cochise County, Smith painted the beauties she could see all around her: the Chiricahua Mountains, Cochise Stronghold, Cave Creek. She became an accomplished Impressionist painter, particularly gifted in capturing Arizona's dazzling light. Her works were exhibited from Phoenix to Philadelphia, according to gallery notes. Through April 28; tucsondart.org.

The Mini Time Machine Museum of Miniatures is hosting Ghost Stories and Fairy Tales: Make Believe in Miniature by Geoff Mitchell. Anaheim-based artist Geoff Mitchell brings the ghost stories of his childhood to life using 1/7 scale, Tim Burton-esque miniatures to fuel a mix of imagination, nostalgia and curiosity for viewers. A girl with dark clothes and dark hair sits in a bright kitchen and looks forlornly out the window. A woman sleeps in a room that seems supernaturally lit. An empty room holds a desk that looks recently abandoned. The show continues through April 28. 4455 E. Camp Lowell Drive.

Tohono Chul on the northwest side continues its run of Arizona nature shows that are both provocative and pretty. Pollen Path, a look at the journey from flower to seed, opens Valentine's Day with a reception. Father and son Jim and Paul Waid each have works in the show, as does Tom Baumgartner, who made a beautiful litho of an ocotillo. Erinn Kennedy, painter of naïve landscapes, solos in the Welcome Gallery. Feb. 14 to April 17; tohnochul.org.

Bisbee artist Laurie McKenna's one-woman show The Deplorables is occupying Tohono Chul's Entry Gallery Project Space. The installation is an homage to miners ridden out of town and dropped in the New Mexico desert in the infamous Bisbee Deportation of 1917. Through March 17. Abstract painter Tim Mosman follows in the Project Space March 22 to April 28.

One pictures a cheerful husband and wife out back barbecuing on the patio. Its title: "We really enjoy getting together with our friends to drink and dance."

David Graham of Philadelphia makes color works that document his epic road trips, zeroing in on roadside vernacular architecture. And David Hurn of Wales delivers a humorous take on Arizona's otherworldly landscape. Through April 20; ethertongallery.com. Following up on her lovely Trees show in the Tucson Botanical Gardens at Christmastime, renowned artist Kate Breakey this time around is showing Black Tulips in the gardens' free Heritage Gallery, courtesy of Etherton Gallery. The scarily talented Breakey is an extraordinary photographer who subtly paints her black-and-white images with color. Previous subjects getting the Breakey treatment include birds, oceans and moons. Through April 28; tucsonbotanical.org.

Four artists from Sonora, Mexico, have brought their works to the U.S., thanks to the excellent Louis Carlos Bernal Gallery at Pima College West campus. Separados por Frontera—Separated by Borders brings a badly needed perspective from Arizona's closest Mexican neighbor, now blocked off by the concertina wire banged into the wall by Uncle Sam's soldiers. The artists use a multitude of media, photography, painting and graphite drawing. Miriam Salado makes hyper-realistic drawings of cattle bones baking in the desert, which can't help but conjure up the bones of the thousands of migrants who