From ballet to Balanchine to Bowie, there’s plenty of fancy footwork on the spring calendar 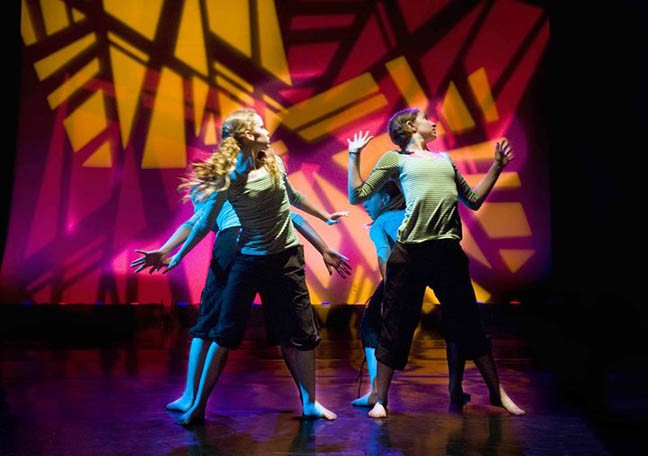 Alongside the talented locals, touring companies are coming through town to entertain fans of dance, including an exploration of racial tension and a tribute to David Bowie.

The season's already started for the UA student dancers: Dances from the Heart opened Wednesday night. But take heart. Performances continue through Sunday, Feb. 17. The opening concert of the semester, the show boasts works by two big-name choreographers, Nacho Duato and Jessica Lang, as well as pieces by faculty. Lang landed in Tucson with her eponymous troupe four years ago, and provided some of the most inventive modern/classical movements the Old Pueblo has yet seen. Two students will perform her dance Among the Stars, which one critic called an "ecstatic duet." Duato, who like Lang choreographs around the world, will be represented by Na Floresta" a 1990 one-act ballet that's been performed by Hubbard Street Dance Chicago and numerous European troupes.

UA prof Autumn Eckman created Drift, a piece about the melting of the glaciers. Live harp music will be provided by the Fred Fox School of Music's Dr. Michelle Gott and the HarpFusion ensemble. Multi-media artist Jonathan Marquis also performs.

Three dance professors choreographed works about love and life. Michael Williams' AlittleSAXophoneSTORY, about a young musician, features tap dancing. Tammy Dyke-Compton's Morning, Noon and Night is a three-part tale, with three sets of lovers, set to popular love songs. A Love Once New, a second work by Eckman, draws on a sonnet by Edna St. Vincent Millay. The original score was composed by UA Dance musician Joe Venegoni. Feb. 14 to 17. School of Dance concerts are in Stevie Eller Dance Theatre.

Tickets for all UA dance shows are available online at tickets.arizona.edu; by phone at 621-1162; in person at the Marroney Theatre across campus near Park Ave. and Speedway.

Side Show, the second concert of the UA season, is an adventure. The work by the always-innovative Sam Watson will take the audience along a guided pathway to see dance fragments performed in surprising places, including inside a curio cabinet. Comfortable shoes are advised. March 29 and March 30, at Stevie Eller and Ina Gittings, a building adjacent to the dance theater.

For the semester's final show, Horizons—Student Spotlight, the dancers show off their skills by doing everything. They choreograph all the pieces, and then they get to dance. April 18, 20, 21, 24, Stevie Eller.

Camille A. Brown has a dynamite slogan for her eponymous dance company: "making a claim on history through the lens of a modern, black, female choreographer."

Brown, a prodigious Broadway choreographer, formed her own prize-winning dance troupe in New York in 2006. Dedicated to "stories and dialogues about race, culture and identity," the company mixes up its dance styles, sashaying from hip-hop and African to modern, ballet and tap. The troupe routinely wins kudos, with critics lauding the "incredibly inventive and energetic dancers" and their "tour de force" shows.

The evening-long dance/theater work the company is performing at Centennial Hall, Mr. TOL E. RAncE (read: tolerance), excavates the history of black performance. It's based on sources as varied as Spike Lee's Bamboozled, a movie that investigates blackface; commentaries by W.E.B. Dubois; skits by Dave Chappelle; and scholarly studies about minstrelsy.

Performing Stardust, From Bach to Bowie

Another New York City troupe, Complexions Contemporary Ballet, hits the Centennial Hall stage to perform Stardust, From Bach to Bowie, described as a “tribute to the life and music of David Bowie, full of glitter and glam.”

Like Camille A. Brown & Dancers—and most contemporary troupes—Complexions revels this in a wide range of dance styles. That mélange of movement, from ballet to hip-hop, reflects the broad dance experiences of the company’s founders, Dwight Rhoden and Desmond Richardson. Both were Alvin Ailey company members, and both also excelled in other genres elsewhere. Rhoden danced jazz with Les Ballet Jazz de Montreal, and Richardson mastered ballet, becoming the first African American principal dancer at American Ballet Theatre.

Dance and Desert, Ballet Tucson’s annual spring concert, always serves up a menu of multiple dances and trays of sweets after the show. This year’s installment has an extra treat in store: the dances will perform a ballet by the revered choreographer George Balanchine, after once again winning permission from the Balanchine Trust to do a work by the master.

His 1960 ballet Donizetti Variations, set to music from the Donizetti opera Don Sebastian de Portugal, deploys 11 dancers—a lead couple and three trios. The choreography is light and joyful, and the dancers will dress in colorful peasant costumes as they dance the bravura Balanchine steps. The concert’s other big work, La Dame aux Camélias (The Lady of the Camellias), also has an opera connection. The new one-act ballet, choreographed by the troupe’s ballet master, Daniel Precup, is based on Alexandre Dumas’ novel of the same name. And the novel, in turn, was the source for the famed Verdi opera La Traviata (which just had a wonderful production in Tucson last week). Ballet Tucson’s prima ballerina Jenna Johnson will dance the tragic Violetta.

Among the other works on the packed program are a comedy by Sam Watson and a contemporary dance by company apprentice Violet Rose Arma that won first place in a company choreography competition. March 8 to10; Stevie Eller Dance Theatre. Tickets at ballettucson.org.

ZUZI regularly hosts a No Frills Dance Happenin’ that gives teen and adult choreographers the chance to try out their works in progress on a live audience. The eclectic event is staged in the Scoundrel and Scamp Theatre (formerly the ZUZI Theatre) in the Historic YWCA. March 8 and 9, 7:30 p.m. Tickets at the door or on-line at zuzimoveit.org/event/no-frills-march-8-2019

Goliath, a villain of the Old Testament, gets a radical retelling in the Artifact Dance Project’s latest narrative dance. Choreographer Ashley Bowman imagines the ruthless giant as a “Goliath for our times, a lonely anti-hero,” who wanders the desert seeking out his purpose in life. Even so, he must contend with his nemesis, David the shepherd.

Marquez Johnson, an Artifact star, dances the part of Goliath, and Jeffery Griffith, plays David. Eight additional dancers round out the cast, all dressed in biblical garb. The dancers perform Artifact’s trademark contemporary dance moves, a style in between ballet and modern. Zack Hemsey, a songwriter and composer, created and recorded a score of supernatural sounds. March 21 to 24; Stevie Eller Dance Theatre. Tickets at artifactdanceproject.org.

Artifact’s season finale, the dance/theater work Monologue of a Muted Man, is an adaptation of the Patrick Baliani play of the same name. The story is set in Venice, where a man losing his hearing faces harsh changes in his life. Claire Hancock will perform the piece as a one-woman show, taking all the parts in the Baliani play, with the exception of the unnamed character Man. A male actor will speak Man’s lines. Ashley Bowman will choreograph the dances and direct the show. Pianist Russell Ronnebaum will play his own musical compositions on a grand piano.

Monologue will be performed in Studio 124 in the Ina Gittings building next to Stevie Eller. May 9 to 12; Tickets at artifactdanceproject.org