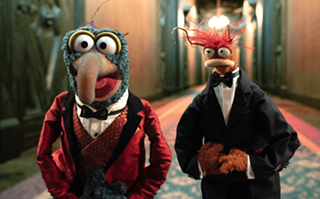 Disney and Muppet fans will get a true, continuous fangasm with every second of Muppets Haunted Mansion, another fine usage of the beloved Henson creations as well as a terrific homage to one of the greatest rides ever made.

The Great Gonzo (shout out to Dave Goelz who has been voicing him since the ’70s) and his buddy Pepe the Prawn decide not to attend the annual Halloween costume soiree with their Muppet cohorts like Kermit and Piggy in favor of a fun night at a mysterious place that may or may not be haunted. Upon arrival, they witness an outrageous musical number in a graveyard and then step into an elevator…that stretches.

These are just the first of many authentic nods to The Haunted Mansion, one of Walt Disney’s great original creations. You’ll see the graveyard dog, you’ll see the floating candelabra, you’ll even see a wonderful (and not so surprising) riff on Madame Leota, the infamous head in the crystal ball.

There’s a nostalgia rush two times with this movie, but it’s not a film that skates by on that vibe (and, OK, it’s more of a “special” than a film). Writers Kirk R. Thatcher (who also directs), Bill Barretta (also the hilarious voice of Pepe) and Kelly Younger, who all have recent and past Muppet chops, have scripted this as wall-to-wall funny. The Muppet charm comes on strong, while Thatcher manages to capture that oddly cozy creepiness that is Disney’s Haunted Mansion. (Yes, the purple wallpaper and hitchhiking ghosts!)

I’m in the camp that thinks Muppets Now was pretty damn great, and it irritates me that a second season hasn’t been greenlit. Disney took the franchise in a fun, modern direction while maintaining some of its old-school charm. This little delight does a lot to cure my Muppet craving.

Haunted Mansion feels very much like Muppets in their ’70s heyday. Apart from when Disney pimps out the Mansion for Halloween with the Nightmare Before Christmas theme, the Mansion has remained as old school as things get. The film’s faithful treatment of the mansion and the Muppets make this one feel like it could’ve been made decades ago. It’s a solid, eternally good representation of both entities.

As for those pesky humans who traipse through, there is Will Arnett as The Host, who gets a nice chance to ape the sound of the ride’s forever Ghost Host vocalist (shout out to the late Paul Frees), delivering some of the ride’s best lines. Danny Trejo, Ed Asner and, yes, Pat Sajak, cameo as ghosts. While the regular Muppets make appearances from their “everybody is alive” Halloween party, they also inexplicably show up as ghosts in the Mansion, which makes no sense, and you won’t care.

Hey Disney, go ahead and scrap all of your plans for live-action takes on your rides and those live remakes of your animated classics. You have the Muppets. Give us Muppets of the Lost Ark, Muppets Jungle Cruise, Muppets Peter Pan, Muppets Snow White, Muppets Make Churros, Muppets Ride the Disney Old Timey Train as a Means of Taking a Nap During Long Day at Park, Muppets Remove All Traces of Racism from Splash Mountain, Muppets Puke on the Teacup Ride, Muppets Go Bankrupt After Buying Park Hoppers for Themselves, Muppets Take the California Out of California Adventure and Puss Out by Putting In a Bunch of Pixar Stuff, etc. And let’s not forget, Disney has Fox now, so let’s get a Ridley Scott-directed Muppets Alien movie. The possibilities are endless, and no sweat for the licensing rights for all of that crap.

In short, please, please, please give us more Muppets, and feel free to mix in the Disney. They go good together, as this sure-to-be-viewed-annually Halloween treat has proven.