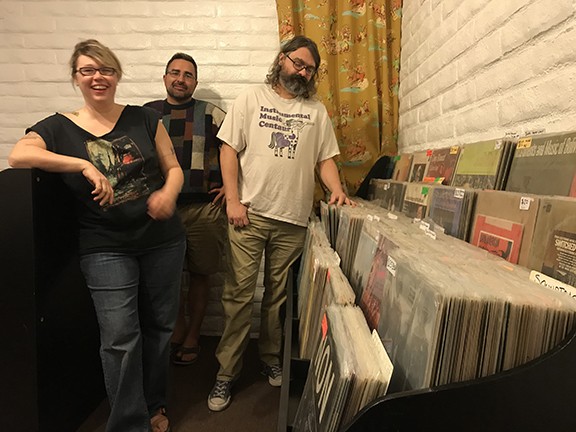 An oversized room with painted cinderblock walls, low ceilings and light-stained wood paneling greets you when you step into the recording space at Baby Gas Mask Records.

It's a comfortable, if somewhat understated design, one that's been eight years in the making—since founders Melissa and Seth Mauzy launched the label in 2010.

That's the year the couple, along with friend (and longtime sound engineer) Chris Levesque, launched what's become one of Tucson's most recognizable local record companies, initially operating out of a home studio jammed in their basement.

It was a labor of love for both; Melissa leaving her lifelong love of geography, while Seth spent time working as a copy editor at a local paper and running a home-brewing store.

The couple's life changed in 2010, when Seth inherited a sum of cash from his parents that gave him newfound financial freedom.

The Mauzys were on the fence, trying to figure out to use their fiscal resources—split between launching a brewery or a record label.

"Looking back, we were idiots," Melissa says. "We went with the record label, but we could have been making boat loads of money."

For Seth, the appeal of getting away from commercial and retail work was far too appealing to turn down.

"I wanted to do something for myself, I wanted to start up something and be my own boss," Seth recalls. "I'd always been a record collector, a musician and just kinda went, 'I wanna make records, lets figure out how to make this happen.'"

Seth extended an invite to Levesque, who was working as a chef at the time, knowing his background with music and the fine art of sound engineering.

"I went to school for music," Levesque says. "Me and [Seth] started playing and recording probably like, dear lord, like 18 years ago or something like that. Then I went on to do the whole chef thing for way too long. I just got too old for that. Then I fell back into music, because I just got tired of the grind and the restaurant."

The trio quickly made of name for themselves, thanks to their efforts in promoting local and statewide artists—including their West Foot Forward compilation in 2015, which consisted of 12 7-inch vinyl singles.

As for the name, Seth says he and Melissa came upon it late one night, some eight years ago, when they were watching television. "It's catchy. Every time you tell it to someone, they remember it," Seth says. "The sound, it was a total phonetic decision, it sounded good, it seemed to roll off the tongue. On TV, one of those antique shows was on, and they had a World War II era infant gas mask and they kept saying baby gas mask, and it just stuck in my head."

That run allowed the Mauzys and Levesque to collaborate with 24 different artists from various Arizona locales, including Head Over Heart, Sun Bones and Best Dog Award.

It was a moment of highs and lows for the three, giving the company statewide name recognition, while also testing the limits of their undersized studio.

"People still thought of it as a home studio, even with all of this professional gear [including the old sound board from Centennial Hall]," Melissa says. "It was pretty far out on the east side and wasn't an ideal location."

The trained geographer knew that their previous location was untenable, because of the town's unique layout.

"That was what we struggled with, having the east side studio, because people were like, 'Oh man, that's like 30 lights'," Melissa says. "No one wants to go through 30 lights. As a geographer, I really feel that we could do so much more if we just had good infrastructure."

Their eight-year quest for a space of their own wrapped up late last year, when a grad school friend of Melissa's tipped her off to a space off 17th Street—in the heart of the industrial space south of downtown.

The space, which they are renting, already had a recording space inside—with thick, windowless walls that resonate sound to perfection.

Melissa hopes their relocation can be the awakening for the local music scene, providing a quality recording space for people to practice, or hone their musical skills.

"That's one thing that I wish Tucson did more of...A lot of bands that we had on the West Foot Forward series have since broken up," Melissa said. "They just don't get the financial support. There isn't an arts grant for Tucson musicians from the city or a major nonprofit, so for them to go out and tour is expensive."

She hopes the space that the three spent most of December frantically organizing can help solve some of those issues, as well as stocking the record store with vinyl.

"I've been doing the record fairs and vinyl swaps in town for years, and that's how I met Kellen and Jake from Wooden Tooth and stuff like that," Seth says. "As far as record stores go, I certainly think that the other folks do, too, the more you can have in a general area, the more likely you're going to drop record collector people that want to come in and buy records."

The three hope their new space, and the record outlet store tucked into the studio's back room, which was launched at last Saturday's grand-opening party held at the studio (located at 960 E. 17th St.), can serve as a catalyst for the local music scene.

"This is an area so close to downtown and it's been categorized as industrial for so long and it's really time that the city, I think, starts extending some of the benefits that have happen downtown to this area," Melissa said. "I think we were wise to make the purchase of this building. It would be great to see some support."

Correction: This article originally said Baby Gas Mask Records had purchased the new studio space. The company is renting it.