Raikkonen was on active duty for the United States Army for 12 years, working on intelligence operations in Korea and Afghanistan. The transition from military life to civilian life was difficult for him.

“You go from this structured life where everything is laid out for you, you know; where you’re supposed to be, at what time, and what uniform, and exactly what you’re doing that day, to now it’s not so structured,” Raikkonen said. 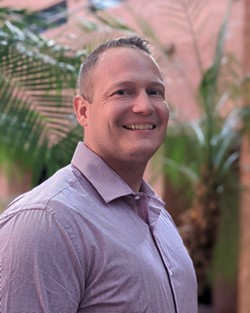 Without structure, veterans like Raikkonen have more time to reflect on their service. Memories of traumatic events and the loss of camaraderie that once surrounded them often lead to a decline in mental health. This is reflected in data from the 2021 National Vetaran Suicide Prevention Report, showing suicide rates for veterans in 2019 were 52.3% greater than non-veteran US adults.

Raikkonen said he went to the Department of Veterans Affairs to receive health services and was subsequently diagnosed with PTSD and depression. Thoughts of suicide and death are often associated with depression.

“They kept handing me medications and when one didn’t work, they would add another one to it,” Raikkonen said. “It was getting to a point where I was about ready to kind of give up and so I stopped taking it.”

More than 300 million people of all ages are estimated to suffer from depression globally and a third of that population is considered treatment-resistant, meaning they don’t respond to typical antidepressants. The two main types of medications available for people with depression include selective serotonin reuptake inhibitors (SSRIs) and serotonin and norepinephrine reuptake inhibitors (SNRIs). These medications come with a lot of side effects and aren’t guaranteed to help with symptoms of depression.

Raikkonen said a friend convinced him to start researching other treatment modalities, which led to his discovery of ketamine treatment. Although originally synthesized as an anesthetic, ketamine has been garnering psychiatric interest for the treatment of anxiety and depression in the last two decades.

Ketamine’s creation can be traced back to 1965 when phencyclidine (PCP) was discontinued as an anesthetic for people undergoing surgery. PCP was causing side effects, so it was replaced with a new short-life derivative:
ketamine.

In the first clinical trial of ketamine, patients recounted feeling altered consciousness and euphoria. In 1970, ketamine was fully approved for anesthetic use by the FDA.

Ketamine got a bad rep in the ’70s after the public became aware of its euphoric effects. The drug was heavily abused outside of the operating room (and still is), but out of this came a theory that ketamine helped with symptoms of depression, spurring scientific research.

According to Yale researchers, ketamine triggers glutamate production. Glutamate forms new neural connections, which can lead to the development of more positive thoughts and behaviors. This has never been recorded as an effect of other antidepressants on the market.

Raikkonen said he met with clinical administrators to create a unique treatment plan for his mental health.

“I would 100% recommend this to any veterans,” Raikkonen said. “So many of my friends come home from the war, but then they lose the battle at home, you know what I mean? I’ve had quite a few that don’t make it back and within a couple of years’ time, they’ve committed suicide. Some of them were on the traditional medical treatments.”

Raikkonen didn’t experience the same side effects as traditional drugs. He didn’t feel lethargic and suicidal thoughts were absent. He said it was a 180-degree switch from the antidepressants he tried before. The integration of ketamine into his mental health treatment inspired Raikkonen to pursue a career at the Ketamine Wellness Centers. Raikkonen now works for the Ketamine Wellness Centers location in Phoenix-Mesa as director of human resources.

His main job duties involve job recruitment. Ketamine Wellness Centers is rapidly expanding to multiple states. Its expansion is a reflection of the growing popularity of ketamine in the United States and, more specifically, in Tucson.

Tucson has become a hub for the national research movement around psychedelics. As covered in my podcast series, The Psychedelic Renaissance, Southern Arizonans are growing more interested in alternative medicines to treat mental health disorders.

Last September, local therapists and counselors gathered for the Psychedelic Assisted Psychotherapy Symposium hosted by Tucson Counseling Associates and Cathexis. This event brought together mental health professionals all over Tucson to present on psychedelics and their integration with therapy.

“When it says assisted, that means the client is ingesting a substance during the psychotherapy, and integration is just talking about their experiences,” Kincaid said.

Kincaid founded Tucson Counseling Associates in 2015 as a private practice, but quickly realized she needed more counselors to meet demand. Her practice now has 15 people on staff and a waiting list for each therapist.

Kincaid’s speakers discussed multiple psychedelics currently undergoing research, but the focus was on ketamine because it’s a legal drug that’s approved for use in animals and humans. Psychedelics such as MDMA (ecstasy), LSD and peyote are considered Schedule 1 drugs under federal law. Schedule 1 drugs are defined as having no medical use and a high potential for abuse. With growing scientific research into all of these psychedelics, their federal status could change in the future.

Kincaid presented on harm reduction in regards to psychedelics. She said she’s worried about the “psychedelic gold rush” happening right now. With new books like How To Change Your Mind by Michael Pollan, psychedelic research all over the country, and documentaries like Hamilton’s Pharmacopeia, Americans are flocking to psychedelics for answers.

“I do worry about the speed at which the field is growing because I think these are really potent medicines,” Kincaid said.

During the presentation, she said the national conversation around psychedelics focuses heavily on presenting them as magical drugs. Psychedelics, including ketamine, are intense medications and Kincaid said she’s had patients who were retraumatized by their psychedelic experience. She advised the audience to have informed conversations with their patients before they undergo a psychedelic treatment. Educate them on the risks, but remain open to their interests.

“We have people come to us who already have therapists because they don’t want to be judged,” Kincaid said during the presentation.

Kincaid also advised the audience to not direct the patient during therapy, but to allow them to guide the conversation around their psychedelic experience.

“It is important to talk about those experiences and show how to reframe it, so it wasn’t a bad experience, it was a difficult experience,” Kincaid said.

Tucson Counseling Associates is approved to administer ketamine on-site and they applied to become a trial location for MDMA, which is also in research trials for the treatment of PTSD. TCA is now offering ketamine-assisted psychotherapy with availability for new clients.

Kincaid’s practice is focused on psychedelic integrated therapy, but Tucson is home to psychedelic-assisted therapy locations as well.

Nurse Practitioner Jennifer Montjoy is a doctoral candidate at the University of Arizona and founder of Resilience Behavioral Health Solutions in Tucson. Montjoy specializes in ketamine-assisted psychotherapy and is currently researching ketamine-assisted psychotherapy outcomes in chronic PTSD. Her dissertation also explores psychospiritual, or self-transcendence, as a measure in clinical work for
psychedelics.

Montjoy was drawn to the research on ketamine before opening her own practice here in Tucson. She felt the integration of ketamine with therapy was a more holistic approach to mental health than traditional treatment methods. Traditional anti-depressants merely put a Band-Aid on the symptoms of mental health disorders, according to Montjoy. On the flip side, ketamine-assisted therapy could provide the space for patients to address deeper aspects of mental health by quieting regions of their brains.

“There are some conditions where it’s so severe that even with the psychotherapy, they’re not able to make progress, they’re stuck,” Montjoy said. “If we can get the prefrontal cortex to take a timeout, it enables this receptiveness that’s not present with things like treatment-resistant depression, chronic PTSD, really severe anxiety and panic disorders.”

Montjoy’s practice is unique because she prefers to induce the psychedelic effect of ketamine for her patients. Instead of administering ketamine through an IV, like most clinics, Montjoy does an intramuscular method. IV clinics tend to administer ketamine over a long period of time to sideline intense psychedelic experiences.

“I use a very small needle, and it’s usually administered in the deltoid, which is that muscle right below the shoulder joint,” Montjoy said. “It takes literally a second, there’s no tubing, it’s not as invasive, and you’re not attached or connected to anything.”

This method ties into her research on self-transcendence. By introducing the psychedelic effect, Montjoy also hopes to understand if ketamine can heal spirituality. This is a new complex research topic that looks at psychology and psychiatry through a spiritual lens.

Although ketamine is becoming a breakthrough therapy for treatment-resistant mental health disorders, Montjoy stressed that ketamine is not a magical drug and should be used with other mental health practices like therapy.

“The therapy is really the key, the medicine is a tool,” Montjoy said.

Montjoy is excited to be a part of the growing research into psychedelics and what it means for psychology and psychiatry. She said the field of psychiatry was stagnating.

“We’re getting back to the roots of mental health care, which was a marriage of psychology and psychiatry,” Montjoy said.

Correction: This story has been updated to note that Tucson Counseling Associates has been approved to administer ketamine on-site.