Spaced Out: City of Tucson zeroes in on zoning updates for marijuana-related businesses 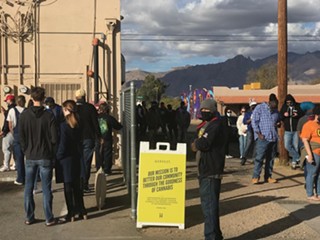 The process continues this month as the deadline for the Arizona Department of Health Services to finalize the rules has come and discussions continue in the chambers of Tucson city council.

While the rules take shape, though, the marijuana business has quickly evolved into an economic powerhouse, creating jobs and generating revenue for the state and municipalities.

From the outset of the pandemic, the marijuana industry has been considered an essential service and was one of the sectors that saw booming sales in a year when many businesses, especially in the hospitality industry, were facing massive losses, going into debt to stay afloat or shuttering altogether.

The year 2020 saw a big increase in economic activity in the cannabis sector, from $700 million in total medicinal sales in 2019 to topping $1 billion in 2020, according to Leafly, an online information clearinghouse for the marijuana industry. There was an attendant job bonanza, with Arizona adding 5,648 jobs in 2020 to bring the total to 20,728 individuals employed in the sector. That number is only expected to grow as the industry expands over the course of the next several years.

In August 2020, the city began work on temporary measures to help ease crowding at local dispensaries as a crush of patients lined up in the early days of coronavirus restrictions to stock up on medicine. The zoning discussions were also intended to get ahead of the green rush with updates to the Unified Development Code Related to Medical and Adult Use Marijuana Dispensaries.

In the wake of a stakeholder meeting in mid-October, the city enacted COVID-related temporary measures to accommodate social distancing, including curbside pickup and delivery, home delivery and the utilization of unused space to expand dispensary lobbies. It also allowed for the use of drive-thrus where they exist in buildings that have been converted to dispensary use.

The opening of the recreational market came earlier than anyone expected when the DHS gave the green light to begin adult-use sales on Jan. 22. The few dispensaries that opened up early for recreational sales were inundated with new customers lining up for hours to get legal pot, causing parking problems and disrupting the ebbs and flows of the neighborhoods surrounding local cannabis shops.

The Arizona Department of Revenue recently reported that the new adult-use market brought in $2.9 million in January alone. The Arizona Joint Legislative Budget Committee estimates revenues could reach more than $1 billion by 2023, mirroring what the medicinal marketplace has already achieved.

Recent city tax collection projections estimate that by 2026, Tucson could reap more than $9 million in tax revenues annually from dispensary and adult-use sales.

The early crush of business has died down as the novelty has worn off and cannabis supplies have been strained, but municipalities throughout the state continue to do what they can to regulate pot sales and use. Prop 207 allows local jurisdictions to create their own rules around recreational weed, but they cannot create ordinances more restrictive than what is currently allowed for medical dispensaries.

Among the changes proposed in Tucson are increasing the maximum size of a dispensary from 4,000 square feet to 10,000 square feet; removing restrictions on drive-thrus; and amending the ordinance to reflect weed's legal status. In order to increase opportunities for more locations, the updates propose reducing "setback," the number of feet between dispensaries or between a dispensary and a school, church, public park, library or substance treatment facility.

The process hit a snag in January, when a planning commission session had to be postponed due to the ravages of COVID and because three commissioners had to recuse themselves due to perceived conflicts of interest.

"Because we had lost some commissioners during COVID, we didn't have enough commissioners to actually get a quorum for the item," said Dan Bursuck, a Tucson principal planner who added that they were able have some meetings last month.

"It's a quick timeline for a code amendment," Bursuck said. "We usually don't do these things as quickly as this."

In a March 17 meeting, commissioners were hesitant to move forward with the UDC changes, with some in favor of waiting for AZDHS to finish writing the final rules for recreational cannabis, including the 26 social equity licenses intended to diversify ownership and help communities that have been adversely affected by the decades-long War on Drugs. The amendments passed with a 3-5 roll call vote though, and will move on to city council.

Although AZDHS had an April 5 deadline to finalize the rules for adult-use (after press time), the development of the social equity program does not have a timeline.

"As far as the rulemaking, it's all being done at the state and I haven't noticed that it's particularly an open process," Bursuck said. "I have sent emails and calls up to them to try to get an understanding of what's going on, and they've told me to check their website, and eventually, it'll be up. I think we're kind of in a situation where there's just not a lot we can do, but we're trying to figure out a way to really support those licenses when they do come on board."

The city does not have a lot of control over regulation of cannabis dispensaries, and is limited to land use, dispensary size and dealing with complaints from the public. Even if Tucson gets some of the social equity licenses, Bursuck does not expect the overall number of shops to be more than 15 or 20.

The City Council was scheduled to take up the issue at this week's City Council meeting, which took place after the Weekly's deadline. Council members had the choice of adopting UDC amendments as proposed, adopting proposed amendments with changes, continuing the item to a later meeting or sending it back to the planning commission for amendment.

Information about the process can be found at tucsonaz.gov in both the mayor and city council and planning commission sections of the website.

Let’s Get Small: The Latest In Edible Technology: Nano-Emulsification