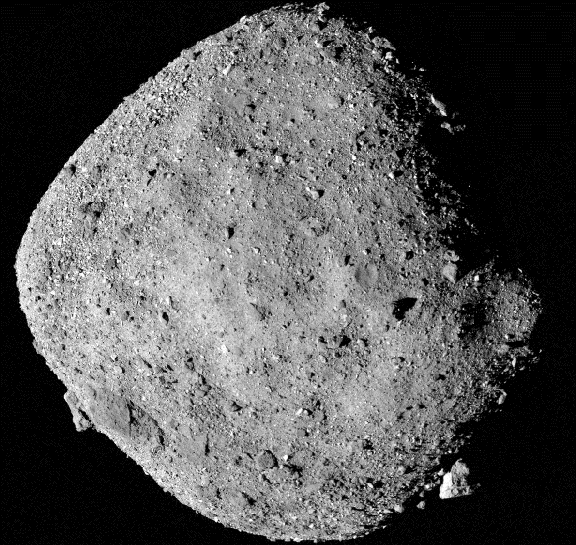 Nasa/Goddard/University of Arizona
A closeup of Bennu, showing the asteroid’s rough surface with many boulders.
On Thursday, Dec. 12, NASA announced that the OSIRIS-REx spacecraft will attempt to collect samples from the "Nightingale" crater site on the asteroid Bennu.

The OSIRIS-REx spacecraft is on an asteroid study and sample-return mission, led by University of Arizona planetary science professor Dante Lauretta.

"This [site] really came out on top because of the scientific value," Lauretta said. "The high latitudes means it stays relatively cool, and the primary objective of OSIRIS-REx is to bring back organic material and water-bearing material from the early solar system. And being in those high latitudes we think gives us the best chance to preserve that kind of material."

The surface of the asteroid Bennu is far rockier than scientists originally thought, making sample retrieval difficult. OSIRIS-REx will not land on Bennu to collect a sample of its surface, but rather use a "touch-and-go" system, approaching the surface and spraying a jet, capturing some of the ejected particles. The sample collection sites are no larger than a few parking spots, and often surrounded by large boulders.

"The biggest challenge of the Nightingale site are those large boulders off on the eastern edge of the crater," Lauretta said. "Quite honestly, I thought it was going to be obvious from the first images where the sample regions were and that it was going to be a straightforward site selection, and it was nothing of the sort."

OSIRIS-REx launched on Sept. 8, 2016, and reached the proximity of Bennu on Dec. 3, 2018. In the year since, OSIRIS-REx has orbited the asteroid while researchers mapped its surface. The spacecraft is expected to return to Earth with its sample in September 2023.

NASA estimates the sample collection can retrieve upwards of "30 sugar-packets" worth of carbonaceous dust and rock from Bennu's surface.

Prior to sample collection, researchers have already learned a lot about Bennu, including that it is one of the darkest objects in the solar system, it is packed with more than 200 boulders larger than 33 feet in diameter, and hydrated minerals on its surface indicate it encountered water at some point in its past.

Bennu is also of particular interest because scientists consider it a "potentially hazardous object." With an orbit similar to Earth's, Bennu has a roughly 1-in-2,700 chance of impacting Earth between the years 2175 and 2199.

With a "spinning-top shape" already known before arrival, Bennu's surface is older than expected, but shows evidence of recent activity. Scientists describe this as a "dynamic surface," formed from multiple collisions with smaller asteroids. Bennu also contains a lot of empty space, up to 60 percent, but its shape indicates an interior stiffness, with enough internal strength to allow the surface to crack.

Bennu's rotation is also steadily accelerating at about one second per century. This increase is due to the YORP effect, where differences on the surface of a small astronomical body unequally scatter solar radiation. Due to Bennu's aforementioned roughness and variety of albedo, it is catching and reflecting sunlight at different angles, causing its rotational rate to drift. Researching this phenomenon is one of the original goals of the OSIRIS-REx mission.