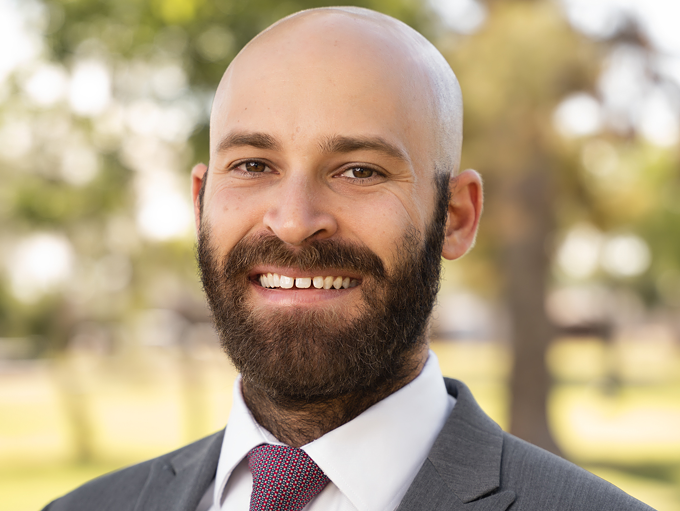 (File photo)
The state chapter of the National Organization for the Reform of Marijuana Laws will be co-chaired by board members Jon Udell, above, and Allison Stein, while the Southern Arizona chapter will depend on its membership to keep going.

His monthly board meetings were entertaining and sometimes epic, but now Arizona NORML will have to find a new public face, as Executive Director Mike Robinette has stepped down from his leadership position to ride off into the sunset and enjoy retirement.

In the interim, the state chapter of the National Organization for the Reform of Marijuana Laws will be co-chaired by board members Jon Udell and Allison Stein, while the Southern Arizona chapter will depend on its membership to keep going.

“The way he presented information was entertaining and one of our biggest losses is just how great Mike was at holding a crowd and keeping it lighthearted and entertaining while still conveying information,” AZNORML Director of Politics Udell said. “That’s something that’s not really easy to replace, but we’ll do the best we can.”

Robinette has been involved with Arizona NORML since 2018 and founded the Tucson-based southern Arizona chapter in June 2019.

Under his leadership, Robinette has raised the organization’s profile in the Tucson community and in the halls of the State Capitol through his advocacy and lobbying work.

Whether it was amassing dozens of citizens for Zoom calls with legislators or picking up cigarette butts along Campbell Avenue, Robinette has left an indelible mark on the cannabis community and the way in which marijuana legislation has evolved since the passage of Proposition 207, the Smart and Safe Arizona Act that legalized adult-use, recreational cannabis in 2020.

He took over the directorship in the wake of the untimely death of former Arizona NORML director, the late Mikel Weisser, who died in May 2020.

For a year Robinette worked with another former director, Ryan Wilson, to stabilize the organization and was officially appointed in May 2021.

“We had to transition through Mikel’s passing, which was devastating for the organization,” Robinette said. “Under my watch, working with Jon and the other board members, we’ve grown the board and the organization is really solid and strong now to where it can absorb the loss of one person and still continue to move forward with its charge and its mission.”

Robinette moved to Arizona from the Baltimore area in 1992 after a stint in the Peace Corps teaching math in Cameroon. He devoted his career to education for 27 years, with the final 17 dedicated to teaching math at Ironwood Ridge High School.

The seminal event that brought Robinette to cannabis advocacy took place in 2018, when Keebler-elfin former U.S. Alabama Senator and Trump Attorney General Jeff Sessions rescinded the Cole-Ogden memos, making it easier for the federal government to prosecute cannabis offenses in states where marijuana is legal.

“I was so incensed by that because I knew it was going to happen,” Robinette told the Weedly in October 2021. “When that happened, I said, ‘That’s it, I’m gonna engage my congressman.’ So, I called National NORML and they recommended going to an Arizona NORML chapter meeting, which I did in February 2018.”

From there he threw himself into the task, working side-by-side with Weisser and the rest of the AZNORML board.

Weisser’s death, combined with the onset of the COVID-19 pandemic shutdown, called for action and a new approach to lobbying, resulting in a change in the way AZNORML interacted with legislators.

It was a moment in time AZNORML took advantage of.

Advocacy in a post-COVID-19 world

Prior to the 2021 legislative session, lobbying took place face-to-face with elected officials, in person at the Capitol in Phoenix, usually in tiny offices. The advent of virtual meetings in 2021 and 2022 created an opportunity to increase participation.

Previously, advocates were lucky to squeeze a small handful of people into an office, but Zoom meetings allowed dozens of people to directly address their representatives with a more substantial show of support.

“When we did our virtual Lobby Week because of COVID, we made the serendipitous discovery that doing it virtually is so much more powerful than actually doing it in-person,” Robinette said. “We found that we could control the process, we could orchestrate the meetings so that we control the entire process of the meeting, and we can control the message as well.”

Virtual meetings also made scheduling easier and allowed more flexibility for both advocates and legislators. During the 2020 legislative session, AZNORML held 51 meetings with representatives of both parties, with citizens participating in the process from the comfort of their homes throughout the state.

Robinette added to AZNORML’s lobbying efforts by holding a series of trainings last fall to teach participants how to navigate the Arizona legislature website and work its “request to speak” feature in preparation for this year’s session.

Miles and miles of expungement

But the most impressive work AZNORML did throughout 2021, was organizing more than 60 expungement clinics throughout the state with volunteer attorneys to help people with low-level marijuana convictions clear their records.

“What’s really positive about what Arizona NORML did is we filled the void, we filled that emptiness when expungements were first starting,” Robinette said. “We were the only game in town and in the early heady days of expungement clinics we were on the frontier doing something new and different.”

According to Udell, who traveled many miles to all corners of the state as a pro bono attorney, Robinette likely drove “300 to 500 hours” organizing clinics as an unpaid volunteer.

“I think it’s really easy to overlook how much time goes into all of this stuff, and folks on the outside don’t really appreciate it,” Udell said. “In my personal, humble opinion, I think the legacy Mike’s leaving behind is one of service and professionalism and energizing the community. He’s someone who never took any kind of payments from Arizona NORML, and was reluctant to even get reimbursed for gas for drives back and forth from Tucson.”

Udell added that he has received a lot of positive feedback from the Capitol about the professionalism Robinette brought to the organization.

Gunnigle worked closely with Udell and Robinette on expungement, but the highpoint of his work at AZNORML to her was his work to kill House Bill 2415 last year, that would have made public consumption of cannabis in any form illegal.

“He took the reins after the devastating death of Mikel Weisser and turned NORML into a force at the capital,” she said. “Arizona cannabis consumers have a voice at the Capitol because of Mike. Jon and Allison have some big Birkenstocks to fill.”

For those who regularly attend board meetings, the energy Robinette brought to his presentations—and his signature Birkenstocks—will be particularly missed.

“For so many years I was trying to sell math to teenagers who weren’t buying what I was selling,” he said. “But you know, it is funny, there really is not a lot of difference between Teacher Association work and NORML work. Making that transition to NORML was relatively easy.”

NORML’s place in the political world of cannabis

While it would be nice if the “free the weed” people were right and we could just magically deschedule cannabis and make marijuana “legal” in a true sense of the word, that is not the world in which we live and it only works if citizens get involved and make their voices heard.

NORML was established in 1970 as a nationwide policy watchdog, tracking proposed cannabis-related legalization and providing a voice in the halls of government for the cannabis community.

The Arizona chapter of NORML was founded in 1990 and was involved in legalization efforts throughout the 1990s, playing a key role in the 2010 Arizona Medical Marijuana Act ballot measure that created Arizona’s medical marijuana program.

Since 2015 Arizona NORML has worked to shape cannabis law at the state legislative level and has advocated for laws expanding access to cannabis as well as working on behalf of consumers in an effort to reduce the cost of commercially available marijuana.

Both Robinette Udell believe the organization is on an upward trajectory with a solid foundation, and hope that the next executive director can take it to the next level.

“Bottom line is, the organization is in a really good place right now, and I would not have gone this way if it wasn’t at this point,” Robinette concluded. “It’s a testament to the board, so I have 100% full confidence that with John and Allison co-chairing, Arizona NORML will continue its trajectory of excellence and I’m not worried at all about the organization. I’m looking forward to seeing it continue to grow and to be effective in what it does.”

Anyone interested in applying for the statewide directorship can send a resume and cover letter to Jon Udell at jonu@arizonanorml.org. This is a volunteer position.

On a personal note, the Weedly first met Robinette in 2020 as it established this iteration of the cannabis beat in Tucson Weekly. Whenever the Weedly needed answers to questions involving cannabis or legislation related to Prop 207, Robinette was always a text or email away at most hours of the day or night.

The Weedly appreciates Robinette for his volunteer contributions to the cannabis community and his work shaping the legislation that will guide the way the laws are interpreted in the future.