HERE IN THE REAL WORLD

When Plush sold, probably a few people shared my concern about what would happen to the space as a live music venue. The number of shows by touring acts seemed to diminish in the last year anyhow, replaced by more karaoke nights and comedy. Not that there's anything wrong with those two fine forms of entertainment, but it's always nice to have more options on the live music front as opposed to fewer. While The Flycatcher seems to have a few issues to still work out (I don't think they have a website of their own yet), there are still great shows being announced for the space (Bob Log III has a show on Sept. 4; Shonen Knife is coming on Oct. 6) and, while probably holdover shows from the Plush days, two wildly different acts performing Friday and Saturday. First up, on Friday, New Zealand drum-and-bassers The Upbeats for a 9 p.m. show. Around since 2001, Terror Snake and Donnie Wolf (not their actual names, although you never know, New Zealand can be a confusing place) have recorded for a bunch of big dance labels, have toured the world and are currently promoting an EP, Rituals, coming out this month. Going off the ecstatic reaction from fans on the Facebook page for this event and the fact this is the group's only stop in Arizona on their limited tour, this should be a big deal for fans of the genre. Tickets are $12 for the 21 and over event. More info at phatentertainment.net.

On an entirely different note, People Under the Stairs, the long-time independent hip-hop group from Los Angeles are Saturday night's entertainment on the Flycatcher stage. PUTS were in Tucson not all that long ago as part of the Night of the Living Fest, but they're coming back to promote their new album, 12 Step Program, the duo's first album since 2011's Highlighter. If you're the kind of person who complains that rap music used to be so much better back whenever, you owe it to yourself to show up for this show. Recommended if you like Jurassic 5, Dilated Peoples or Blackalicious, People Under the Stairs are thoughtful and interesting students of music history that put that digging-in-the-crates-based knowledge to good use in their albums. Should be a great show, with tickets $15 for the 21 and older show. More info at statesidepresents.com.

(WHO SAYS) YOU CAN'T HAVE IT ALL

I went to the second weekend of Coachella a few weekends ago and a few people who knew I went asked me what the best performance I saw over the three days of heat, dirt and the constant reminder that I am no longer young. While it was amazing to see Outkast again, the Preservation Hall Jazz Band (with a guest appearance by Fishbone) was stellar, and I finally got to see Superchunk again after 20 years (again, I am old), the highlight was still seeing Future Islands.

The synth-pop group with death-metal touches (I am not joking) hit it big all of a sudden off their performance on Letterman a few months ago and surely some people were there to see lead singer Samuel T. Herring's interesting and enthusiastic dance moves, but what really stands out for me is the utter sincerity of their music and the way they perform. Between miming ripping an invisible mask of his head and pointing directly at members of the audience and asking if they believe in love, Herring was smiling, appreciative of the opportunity to play such a big stage and demonstrating that the band's occasionally new-ageish/motivational-tape lyrics weren't a put on. These guys really believe in what they're doing.

I have no idea how long tickets will last for the band's show on Aug. 25 at 191 Toole after they go on sale Friday, but I'll be hitting refresh on my laptop starting at 11:55 a.m. The show, which will almost certainly sell out is scheduled Tickets are $18 and more info can be found at ticketfly.com or on 191 Toole's Facebook page.

Baby Gas Mask Records is celebrating both the release of a split EP from local acts Demonyms and Black Medicine, as well as the label's third anniversary this Friday, May 9 at Surly Wench. Now, two bands performing in honor of their accomplishment should probably be enough to entertain you, but the Baby Gas Mask folks (who are also behind the Party of Special Things to Do show on KXCI starting Sunday nights at 11 p.m.) have loaded up the lineup even further, with that-band-with-the-electric-tuba-player Deschtuco also performing, live art from Keegan Rider plus illusionist Daniel Gordon. Sure, you've probably already blown through your concert budget this month buying great seats for the Terry Fator show at AVA (LOVE THOSE PUPPETS, Y'ALL), but guess how much you'll pay for all of that entertainment, plus the opportunity to buy a cool record? $3 (plus the vinyl is $2 off that night). More info at facebook.com/babygasmaskrecords.

In somewhat depressing news mentioned in this space earlier, Daniel Martin Diaz and Paula Catherine Valencia of the gallery Sacred Machine and the bands Crystal Radio and Blind Divine are busting out of Tucson to head to Los Angeles in the fall (following shows of Diaz's art in Luxembourg and Copenhagen), with the gallery closing at the end of May. However, this Saturday night, the space is offering a Farewell Celebration a bit in advance, with live performances from both of the couple's bands, plus "atmospheric magic" from something or someone called d[foRm]. Diaz will also be selling commemorative full color posters. While I imagine they'll be back if only temporarily in the future, this might not be an event you want to miss if you're a fan. Looks like the show is free, with an artist talk at 5 p.m., Crystal Radio at 8, Blind Divine at 9 and d[foRm] in between. More info at facebook.com/sacredmachine. 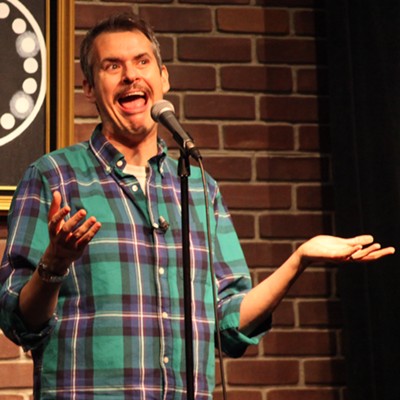