The musical institution known as The Great Cover-Up celebrates its 15th anniversary this year, kicking off next Thursday, Dec. 12, at Plush (then continuing on Friday, Dec. 13, at Club Congress, and the Rialto Theatre on Saturday, Dec. 14 – more on that next week).

A refresher for the newbies: The Great Cover-Up is an annual three-night charity event for which local acts cover the songs of a well-known band or performer in 20-minute sets. Which means that if you don't like whoever is playing at any given moment, go grab a cocktail and chat with your friends and by the time you come back, it'll be a completely different show.

A total of 30 local acts—many of which will pull out all the stops by being dressed in character, etc., and (hopefully) most of which have worked their bootys off learning the songs—will perform over the course of three nights. No one knows which local band will be covering which national act until they hit the stage (except for the bands and the organizers, of which I'm one). It's a little thing we like to call the element of surprise.

In no particular order, here are the local acts who will be doing the covering on Thursday: The Cordials, Garboski, The Pork Torta, Katie Haverly (of Copper and Congress), The Socials, Penny and the Dreadfuls, Proper Operator, D Wall, and Sugar Stains.

Keep in mind that many of these acts are formed specifically for this event by members of other local bands—which means that even if you don't recognize a band by name, you very well might recognize its members.

And please also keep in mind that all of these acts have put in good time practicing these sets, which they'll likely never perform again—and none of them are making a penny. All of the proceeds from the event will be donated to SAAMHA, the Southern Arizona Artists and Musicians Healthcare Alliance, which provides informational and monetary health-care assistance to people in the local arts community.

Traditionally, the national album-release seasons are spring and fall. But for some reason, local acts have been living up to Tucson's slackerish reputation by flooding the market, such as it is, with new releases in recent weeks. This week brings us three more exciting new ones.

Topaz, which just happens to be one of my favorite places to see shows in town, is hosting the release party for Human Behavior's album Golgotha. The local "folk orchestra" combines the angst (and whiny vocals) of Violent Femmes, male/female vocals a la the Moldy Peaches, and the group sing-alongs (and sheer size) of the Polyphonic Spree against a folky, shambolic backing band—a folkestra, if you will. They're utterly charming.

In addition to Human Behavior, the release show, which starts at 8 p.m. on Friday, Dec. 6, will also feature sets by Best Dog Award and Clay Dudash. All ages are welcome and admission is $5. Topaz is located at 657 W. St. Mary's Road, No. C1A. For more info look for the Facebook event page.

There aren't many local acts popular enough to warrant a show at the Rialto Theatre unless it's a big-ass, multi-band event, but this week Sun Bones will test the waters by headlining a triple bill at the venue timed to coincide with the release of a new single.

The five-minute "Reverse Fade" spends its first half with a sophisticated vocal melody and off-kilter timing that continues to build through an instrumental passage before it gets briefly soft again, and then poof! It explodes into a full-on guitar dirge for the duration. "Mi Shebeirach" is pithy by contrast, starting with a lovely vocal melody against a spare guitar arpeggio, subtly building into a full arrangement as it proceeds before dropping down again—similar in structure to "Reverse Fade" but without the final burst.

Catch these two songs and many, many more when Sun Bones celebrate the release of their new single at the Rialto Theatre, 318 E. Congress St., on Saturday, Dec. 7. The Electric Blankets and Best Dog Award get the party started at 9 p.m. Admission is $5 and all ages are welcome. For further details call 740-1000 or head to rialtotheatre.com.

Liila, fronted by Louise Le Hir and Connor Gallaher, is the hypnotic, psychedelic electric project by the same couple that performs acoustic ditties as Catfish and Weezie. Check out this week's live review of their show last week at Plush, then head over to La Cocina, 201 N. Court Ave., at 10 p.m. on Wednesday, Dec. 11, where they'll be celebrating the release of their second CD this year (Live in Tucson, recorded at Solar Culture Gallery, was released in February). Otherly Love will also be performing, as will another act yet to be announced at press time. Admission is free, but donations are encouraged. For more info check out lacocinatucson.com.

YOU CAN'T JUDGE A BOOK BY ITS COVER

For the last couple months, Marty Kool, who has hosted KXCI 91.3-FM's Blues Review show for almost 30 years, has teamed up with Hacienda del Sol Guest Ranch Resort to present an ongoing weekly series of local blues shows that take place every Sunday night at the resort from 6 to 9 p.m. (Happy hour ends at 7 p.m. – hint, hint.)

"Hacienda del Blues" has featured some of Tucson's finest blues purveyors already (past performers include the Bryan Dean Trio, Hans Olson, and Grams and Krieger) and the schedule for the rest of this month continues in that tradition. Check it: the Kings of Pleasure on Sunday, Dec. 8; Heather "Lil Mama" Hardy and Michael P (performing as a duo) on Sunday, Dec. 15; Stefan George and Tom Walbank on Sunday, Dec. 22; the Ed DeLucia Band on Sunday, Dec. 29.

In The Limelight | Katie Haverly Celebrates The Divine Feminine

Laughing Stock: Overstock! So. Much. Comedy. 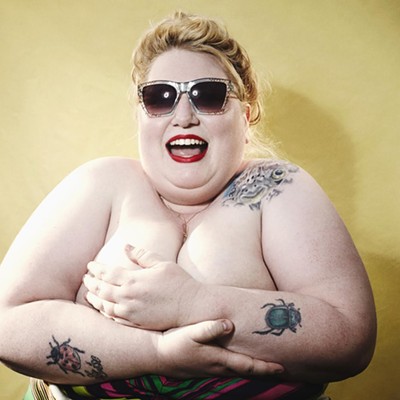