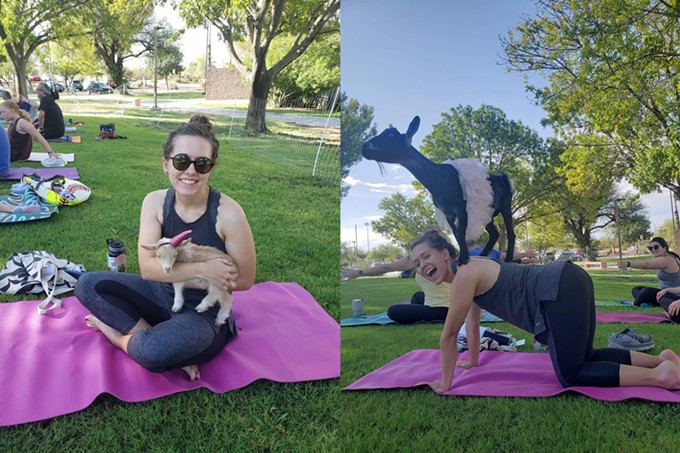 (Submitted)
Reporter Emily Dieckman finds out what it’s like to have a goat on her back while practicing yoga. At Goats of Tucson Yoga, guests get goat therapy with as well as the opportunity to stretch.

It’s my first time at goat yoga, but I’m not the only one. I can overhear a woman on a nearby mat giving her friend a quick primer.

“It’s super casual — you don’t even really have to do the yoga if you don’t want,” she said. “You can just pet the goats.”

This “goat yoga, but hold the yoga” attitude isn’t uncommon. The class I’m taking at Udall Park is through Goats of Tucson Yoga, or G.O.T. Yoga., a local organization started by Emily Haddon in 2019.

But while I’m looking into the origins of this strange trend, I find the website for the Original Goat Yoga, which was started in 2016. One of their FAQs:

Q: Do I have to participate in the yoga portion of the class?

A: No. Some people just like to sit on their mat and snuggle goats.

Goat yoga, as you may have surmised, is yoga with goats. When you’re in certain positions, like on your hands and knees, the goats will jump up on your back. Original Goat Yoga was started by a woman named Lainey Morse. At the end of 2015, she’d just gotten divorced and been diagnosed with an incurable autoimmune disease. She was depressed, and all she wanted was to hang out in her barn with her goats, who were cute and calm and loving.

She started spending evenings with them for what she called goat happy hour. Then she started inviting people over. One of her friends offered to teach a yoga class in her back field and goat yoga was born. It blew up, some sort of combination of cute and novel that made people all over want to give it a shot.

“They think they’re just coming to see the goats and do a little bit of yoga, but then they end up coming and having more of an animal therapy experience,” Haddon said. “The way I compare it is, like, if you give somebody a hug, and your body releases endorphins because of that hug, it’s the same thing with a goat.”

The endorphins start flooding basically as soon as we get there, when we see a woman holding a tiny goat named Oliver, who is only 2 weeks old. He is wearing a fake little unicorn horn, and she lets me pet him. All the goats are dressed up in little tutus and unicorn horns, looking absurd and adorable.

“I love goats,” I think to myself, even though I almost never think about goats in my daily life. I probably think about goat cheese more than I do about the animals it comes from. Now I’m ready to become a goat enthusiast.

The yoga part of the class is led by a woman named Cara Reynolds, who is kind and soothing. “Don’t take it so seriously — it’s OK to laugh at yourself,” she told us. “Just do whatever makes you happy.”

While Cara guides us through yoga moves like child’s pose and “downward facing goat,” Haddon is corralling the group of goats around the class. There are maybe 20 to 30 people there, and she’s making sure everybody gets a chance to interact and take photos with the goats. If you are among the goat community’s chosen few, you may even have a goat poop on you. I don’t want to brag, but I did have a goat poop on me! It was easy to brush off — literally — because their pellets are pretty dry and small, and figuratively, because I was busy being swept up in the whimsy.

I suspected goat yoga might not be especially tranquil, but that I could get some good stretching in while also watching goats scamper around in cute little outfits. That was pretty much on the money. I couldn’t quite settle into my poses and completely relax, because I was always trying to remain alert that a goat could be approaching to climb on me.

To be clear, I loved when the goats climbed on me. They’d just hop right up and then spend a couple of moments getting their bearings. One of them stepped on a knot in my back and it felt a little bit like a massage. Haddon breeds her Nigerian dwarf goats not just for milk, but to be extra small, so they’re perfect for this kind of work. The biggest only weigh about 30 pounds.

While Reynolds’ background is in yoga, Haddon’s is in animal training, mostly horses and dogs. She said training the goats takes time, repetition and lots of positive reinforcement. Why goats, though? Haddon said they make good therapy animals because they’re a little less rambunctious than dogs or cats, for example. And their climbing instinct makes things especially interactive.

“They will try to climb up on anything,” Reynolds said. “So, be ready.”

Then, as she wished us at the close of the class, “Na-a-a-maste.”