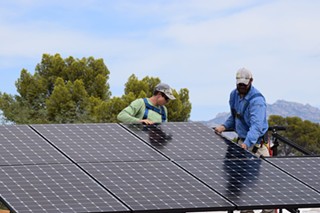 As the average electric bill in Pima County increases each passing year, many Tucsonans wonder whether solar power would be a benefit to their home or business.

Living in a city that receives more than 300 days of sunshine each year lends itself to generating copious amounts of solar power, which is cheaper to produce and deliver to the customer than typical coal energy sources. Homeowners with a photovoltaic system (PV) tend to save money on their electric bill each month while increasing their home's value, according to research conducted by the Office of Energy Efficiency and Renewable Energy. A PV system transforms the energy produced by sunlight into electricity by utilizing a network of solar panels, cables and energy converters.

"Another interesting thing comes from data we've gotten from TEP [Tucson Electric Power]. For every kilowatt-hour of solar produced, it needs about a half-gallon less water than typical energy generation," Park said. "Considering we live in a desert that gets less water than other places in the country, I think that's a pretty great environmental benefit to [using] solar, as well."

A kilowatt-hour is equivalent to the power consumption of 1,000 watts per hour.

On average, a home PV system can cost anywhere from $10,000 to $35,000 or more, depending on the size of the home and the energy needs of the resident. For businesses, the price could range anywhere from $25,000 to upwards of $700,000, said Park. However, there are considerable federal and state tax credits available to lower the price of a PV system.

The federal government's Investment Tax Credit can reduce the cost of a PV system for home or business use by 26%. Homeowners can take an extra 25% off of their personal income tax filed the year the PV system was installed—up to $1,000— with the Residential Arizona Solar Tax Credit. The state tax credit for solar is not available for business owners.

Park estimates a standard seven-kilowatt PV system with about 18 to 20 solar panels would cost approximately $18,500 if purchased and installed by Technicians For Sustainability. The federal government's tax credit would lower that cost by more than $4,800, bringing the total to around $13,700. A homeowner could drop that price down to around $12,700 by using the state's tax credit. Arizona also waives sales tax on residential PV systems with the Solar Equipment Sales Tax Exemption and homeowners don't have to pay additional property taxes should the PV system increase the home's value, thanks to the state's Energy Equipment Property Tax Exemption.

Although many companies offer lease or finance deals when purchasing a PV system, TFS customers typically choose to buy the system outright, said Park. His company works with a credit union to secure loans for his customers who would rather finance. Other solar companies like Tesla lease PV systems to customers who would like to use solar power but are not looking for a long-term commitment.

Tucson resident Richard Stanley chose to lease his Tesla PV system for his midtown home instead of purchasing it. The 65-year-old said he is approaching retirement and did not want to invest upwards of $20,000 in solar for his home while preparing to live on a fixed income.

"I wish I could afford to own them, but I can't," Stanley said. "The lease deal was favorable for me and my situation."

Stanley said while he does see savings on his monthly electric bill, it isn't as significant as some companies promise—and he is OK with it. He still pays less each month than he did before owning a PV system, he said.

"The bottom line is people think they're going to save thousands of dollars. They're not," Stanley said. "But, I'm saving hundreds of dollars and that's still savings. It isn't what some people might expect but it still adds up on a calculator."

While solar may be the perfect choice for many Old Pueblo dwellers, Park said interested homeowners should consider what their energy needs are, make sure their home is able to handle a PV system and research the company they plan to use for installation. Two of the most common repairs homeowners face are roof repairs and electrical panel upgrades, according to Park.

"Part of our process is that we check things out, get on the roof and measure, and do all of our due diligence on the design," Park said. "If we flag something that isn't in the best shape, the homeowner would have to call a roofer to find out what's going on. It really depends on the condition of the home."

Sales staff for numerous solar installation companies use gimmicks and high-pressure sales tactics to get potential customers to sign because their income is commission-based, according to Park. However, the customer soon finds out they are paying the same amount for electricity—or more—as they were before installing solar, said the TFS co-owner.

"You do need to be a responsible consumer and do some due diligence. If it looks too good to be true, then it is," Park said. "I think there are a lot of unrealistic scenarios people are presented with when checking out solar. "

Park said people need to watch out for claims that the local energy provider is going to significantly increase the cost per kilowatt-hour by 6% to 8% when in reality Tucson Electric Power averages about a 1% to 2% increase annually. Another unsavory sales tactic some companies use involves offering an extremely low-interest rate to finance a PV system and then tacking on extra fees that were not previously discussed.

"They're advertising a very low-interest rate but then put together a loan proposal $10,000 to $15,000 more than if they [the customer] would have bought the system outright," Park said. "It's the same system, the same number of panels, same technology, same installation. These companies are able to advertise that low interest because they're adding all these fees to it."

Homeowner Deborah Partiz and her partner, Rocky recently purchased a larger house to accommodate their growing family. After Partiz received her first TEP bill for around $500 at the family's new home, she said she started looking at solar power to reduce their energy cost. She ended up going with a national company that was able to help the family secure a loan for the system. In the end, Partiz purchased a large 44-panel PV system to help reduce her monthly energy bill.

However, she said she is not pleased with the system's results after the first two months of use. While the PV system has lowered her TEP bill by an average of $50 a month, the cost of the loan—at around $175 a month—far outweighs the savings she is receiving. She said she contacted her company to audit her system and make sure it was working correctly. They told her to give the system a year to see if it improves, said Partiz. Her loan terms state she needs to pay nearly a quarter of the loan amount within the first 18 months or her monthly payments will rise to $225 a month.

"I'll give it a year, but in hindsight, I wish I would have gone with a local company, done a little better vetting and gotten a more concrete idea of exactly what I would need to actually get rid of the entire energy bill," Partiz said. "I mean...44 panels is a lot. It's a heavy-duty system and everybody that's checked it out tells me it's huge. But it's a drop in the bucket because it's not doing too much for me."

Corrections: This article originally stated that Trico's kilowatt hour credit was 3 cents. It is 5 cents. It originally referenced Solar City as a local company; Solar City has been purchased by Tesla. In addition, it originally stated that most people working with TFS will lease or finance the system. While leasing and financing is popular with other companies that install solar, most TFS customers buy the system outright.