While it doesn’t have all of the charm of the original, it’s still a lot of fun 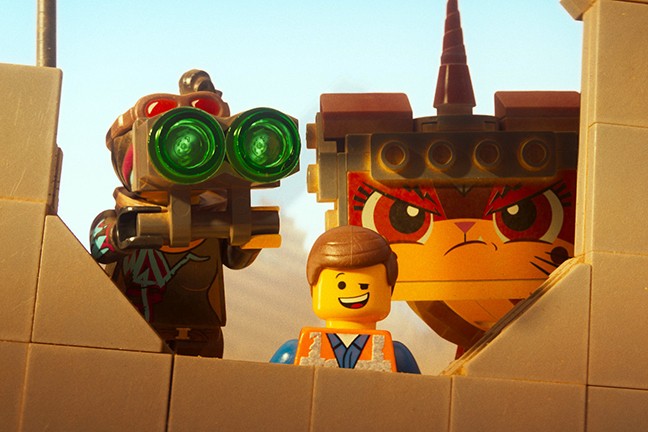 Oh...the Legos. My mom asked me for Legos this past Christmas and I thought, sure, why not? That's kind of cute, buying Legos for your Mommy on Christmas. It's a rad little stocking stuffer, a nice starter present.

So I grabbed a Star Wars X-Wing Fighter Lego set in a well-known department store (OK, since we are already advertising Legos here, I'll name the store: JC Penney's) and figured Christmas shopping was off to a good start. No, I did not look at the price.

After the lady at the cash register announced my total, I stood aghast and realized Mom had her big gift already. Damn...they are expensive! (Incidentally, Mom, earlier today, sent me a photo of the fully operational X-Wing built and ready for play. Okay, it's pretty glorious. Might be worth the money.)

Why did I tell you this story? Two reasons: to let you know that I am commercially out of touch when it comes to gift giving and as a sort of preamble to a very relevant film considering the above story. I am, of course, about to share my thoughts on The Lego Movie 2: The Second Part.

Taking some cues from Mad Max, the Book of Revelations and, yes, Radiohead, The Second Part is another healthy dose of family-friendly fun where both sides of the age spectrum should be laughing heartily.

One of my favorite moviegoing things is to hear an adult blast out laughing, and then their kid following suit. Either the kid is, indeed, in on the joke, or he/she just wants to be like their parent. Either way, it's just a lot of fun, and really cute, when a movie produces these kinds of reactions for its entire running time.

Cut to five years after the end of the first movie, and our hero Emmet (Chris Pratt) is happily buying coffee in Apocalypseburg, a devastated Lego land of sullen tones and broken dreams. Wyldstyle (Elizabeth Banks) has taken to dramatic narrating at all times, things are getting knocked down as soon as they are built up, and invading aliens called Duplos are mostly to blame—invading forces that are at once undeniably adorable and unabashedly destructive.

It's a crazed world where Batman (Will Arnett) winds up engaged to Queen Waterva Wa-Nabi (Tiffany Haddish), leader of the Duplo, and Emmett winds up running with a Kurt Russell-type antihero who is suspiciously like him. The reasons for all of the craziness will not be revealed here. Take the kids and find out for yourself.

Phil Lord and Christopher Miller do not return as directors, but they do contribute to the screenplay. Directorial chores go to Mike Mitchell, whose illustrious career has included Alvin and the Chipmunks: Chipwrecked and Deuce Bigalow: Male Gigolo. While this is easily Mitchell's best directorial effort, some of the charm and zest of the original is lost in the transfer. The movie feels a bit repetitive at times, and some of the action is too fast to be taken in properly.

Flaws aside, the movie is still a lot of fun, especially when Arnett's cranky Batman is at the forefront. There's also a slightly dark underbelly at play here, and it's fun to see a kid's flick that doesn't totally play it safe. As I mentioned before, there's plenty here for adults to appreciate. There are some great gags involving raptors (funny considering Pratt's Jurassic World participation) and a terrific small role for an iconic action hero who spends a lot of time in air ducts.

The Lego Movie 2: The Second Part has a feeling of finality to it, as if these characters are being closed out. But, let's face it, money talks, and with Toy Story 4 on the way (Chapter 3 was supposed to be the last), it's clear that animated movies can keep on trucking as long as adults and kids line up. I'd be surprised if they didn't find a way to keep the Lego Movie ball rolling.