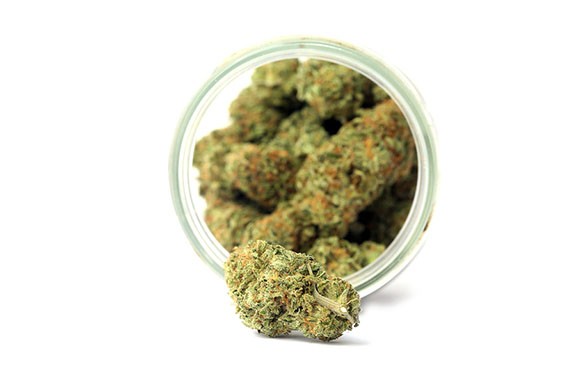 Bigstock
If you want an idea of how far the idea of legal cannabis has come, just check out the day-long symposium on marijuana being held on the University of Arizona campus under the aegis of the UA College of Agriculture & Life Sciences, College of Medicine, College of Science, and the BIO5 Institute.

The sanctioned symposium on a once-scandalous subject is "designed to inform our community about recent evidence-based research and teaching in the emerging fields of horticultural and medicinal aspects of cannabis," according to event publicity.

Southern Arizona thus joins what has been called "a small, but significant, tsunami of cannabis education" ranging from California [UCLA Cannabis Research Initiative, UC Davis Physiology of Cannabis, UCSD Center for Medicinal Cannabis Research] to Colorado [University of Denver Business of Marijuana] and Connecticut [Horticulture of Cannabis, Seed-to-Harvest] and a plethora of other places like Harvard, Vanderbilt, Oxford University—in short, the momentum is picking up steam.

Interesting to view changing public attitudes over half a century about the controversial seven-leaf plant. The Pew Research Center says the concept of legalizing marijuana has gone from a 12 percent acceptance rate in 1969 to a 62 percent favorable rating in 2019.

Arizona has a relatively short history with legal weed judging from the KUSH Tourism webpage, "first legalizing medical marijuana in 2010 in a proposition (the fourth such medical marijuana initiative to appear on a ballot) that passed with a narrow margin of 50.13 percent." Arizona voters narrowly failed to approval recreational use of cannabis in 2016, though they may get another chance in 2020 if a recently launched ballot initiative is successful.

With the medical program in full bloom, a public discussion on cannabinoids at a state-owned institution is a major milestone.

The impetus for the Inaugural Interdisciplinary Cannabis Symposium grew from a slowly dawning realization that initiatives concerning the medicinal potential value of cannabis were becoming widespread.

Not without a certain irony, on the same day that the UA made its groundbreaking announcement, the Drug Enforcement Administration also announced it was "moving forward to facilitate and expand scientific and medical research for marijuana in the U.S.," reportedly bringing happiness—real or forced—to Attorney General William Barr, who responded: "I'm pleased DEA is moving forward with its review of applications for those who seek to grow marijuana legally to support research. The Department of Justice will continue to work with our colleagues across the Administration to improve research opportunities wherever we can."

And that door now appears to be unlocked and open wide with another local irony taking place at the same time. Former Wildcat and New England Patriots tight end—and three-time Super Bowl Champion—Rob Gronkowski chose that day to become a product spokesman for a CBD hemp oil topical medication to aid in pain relief.

Among the many committed entities on the UA campus is the BIO5 Institute, where director Jennifer Barton says: "Cannabis has shown promising benefits for human health and well-being (so) it's critical that decisions in horticulture and human medicine be made on sound scientific basis. BIO5 Institute brings together experts from across disciplines to advance all areas of the biosciences and we're proud to sponsor this evidence-based symposium."

To which event organizer and College of Medicine Professor Emeritus Dr. Raphael Gruener adds: "With the DEA announcing steps to make the growing of cannabis more accessible to researchers, it just goes to show that we at the U of A, through this symposium, are on the right track." ■

Admission to the event is by online pre-registration only via be.arizona.edu/iics.

What’s in a Name?

Growing Concerns Want to start your own marijuana garden? It’s not as easy as it looks.

The Year in Weed: In case your memory is hazy, this was the big cannabis news in 2020