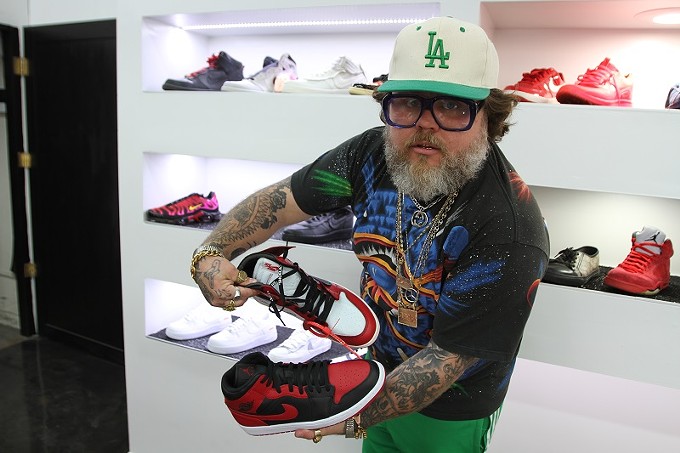 "It's no different than next door," Slobby says. "If it's people cleaning out their garage and they want to sell us their old Air Jordan collection, that's cool. If it's newer, hypebeast stuff, that's cool too. We curate it, we make them look good, we put them under lights and sell it for about three times more. This is what we do. It's no different than a used car dealership."

Generation Cool Sneaks has hundreds of pairs of gently-used, high-end sneakers that range from $50 to $5,000 and sports a selection guaranteed to satisfy even the most discriminate sneakerhead. For the past six months, the reseller said he has scoured the planet looking for used and deadstock inventory, finding rare items like a pair of Jordan 1 Retro High Off-White Chicagos which can sell for around $5,500. (A pair sold on resell site stockx.com for $5,800 on Feb. 19.) Once the doors open, Slobby estimates they will have 200 pairs on the sales floor and another 300 or more in the backroom. While that may sound like plenty of shoes to start a store, Slobby said he is on a mission to continue building his inventory so he can offer the best selection of one-of-a-kind kicks to the public.

"This is the kind of sneaker store I would want to go to in my hometown, where I could get myself something affordable but still have high-end shit, too," Slobby said. "I am anticipating quite a bit of people trying to sell to us consistently, especially early on. Once people start walking by and realizing that maybe they have like three pairs of the same shoe and could sell them, that's when things will really start picking up for us."

Unlike Slobby's vintage shop that covets bootleg items, the shoes sold at Generation Cool Sneaks are 100% authentic, assures the owner. He's been burned before buying knockoff Air Jordans once or twice back in the day, he said and knows all the tricks international counterfeiters use.

"Next door, we appreciate the fan art aspect of bootleg stuff, especially when it's vintage," Slobby said. "But over here, we don't fuck around. We sell real Nike Air Jordans and you're going to get a steal."

The reseller has been in the sneaker game since the late '90s when he first saw Nike was remaking and selling the Air Jordans of his youth. As an avid collector of '80s and '90s memorabilia, he said he was hooked on acquiring as many pairs of these throwbacks as he could.

"I only deal in the shit I care about and all the shit I grew up with. That's why we're so into the '80s and '90s, because it was so big for sneaker culture and American pop culture," Slobby said. "I started buying all the Jordans, Bo Jacksons, Agassis...any Nikes I had when I was a kid and started wearing them as an adult."

Slobby turned to eBay to satisfy his sneaker and vintage toy addiction, he said, which ultimately led him into the vintage resell business more than 20 years ago. If he acquired a pair of shoes that didn't fit or look right, or he just didn't want anymore, Slobby sold it on eBay. He soon noticed he could have the childhood collectibles he desired while making a living too.

"Around 1999 or 2000, I got into collecting. I used to be the weirdo with 30 or 40 pairs of sneakers, which has now been completely normalized," Slobby said. "I started shopping on eBay and realized there was a worldwide marketplace. If I found a nice shoe that wasn't my size but was cheap, I could buy it and sell it to someone and then get the money to buy myself the shoes I wanted."

Over the past 20 years of reselling, Slobby has developed criteria for evaluating shoes which he makes sure his employees know before they begin buying sneakers from the public. He expects them to know what he knows, dress like he dresses, and use the same terminology he uses, so every customer is satisfied they're getting the best price for their used kicks.

Store manager Anthony Ardrey has been dealing in the resell sneaker market for nearly as long as his boss has.

The two have a long-standing professional relationship that dates back to when Ardrey had a streetwear company, Taste Clothing Brand, and was putting on sneaker conventions a decade ago. The former Mercedes salesman reiterates Slobby's notion that reselling streetwear sneakers is much like selling luxury cars, but he prefers to work at Generation Cool Sneaks because he knows the culture well and loves classic sneakers, he said.

"You're dealing with a lot of intangibles when you sell Mercedes, intangibles that you don't have a grip on, and you're dealing with such a different clientele," Ardrey said. "What's great about selling high-end sneakers is the people you get to interact with. They're more my speed and relatable because I'm more in that tax bracket."

Employee Karson "KB" Butler said he started reselling sneakers a year ago to help pay for college at the University of Arizona. The 18-year-old Southern California native said he decided to take the semester off to learn more about the business from Slobby.

"I'd rather focus on my business and push that forward than go to school and get a degree. I was in school for entrepreneurship. That's not really a degree...that's necessary to flourish," Butler said. "I would rather invest the money I would use for school in myself.

Slobby said he always tells people he's a reseller second and a collector first. The business has to be fun for him and his staff or he doesn't want to pursue it. He's already tried a version of the sneaker store for a few years at the Tucson Mall but said he shut it down because of differences with his partners in that venture. This time around, he thinks Generation Cool Sneaks is going to be a slam dunk because his staff is extremely knowledgeable and he can now be at two places at once. But at the end of the day, he said he wants his customers, employees and himself to have fun while sharing their passion for streetwear sneakers at his new shop.

"I know this might sound unbelievable to some people but I'm mostly doing this for fun. When it comes to being a methodical and savvy businessman, I got to admit, I'm not that guy," Slobby said. "I'm a guy who actually enjoys this shit. If I can make enough hay for myself and my family off my personality and have fun doing it, that's better than constantly worrying about how many shoes we sold today."