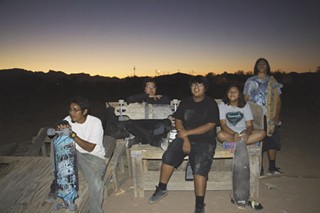 A collective of young skaters from the Tohono O’odham Nation is one step closer to building a skatepark in their district to honor a fallen friend.

The Endure Skatepark Group has raised more than $50,000 toward its $66,500 goal to construct a concrete skatepark in the GuVo District with assistance from the Native American Advancement Foundation, Tucson Skatepark Alliance, Mortal Skate Shop, Tony Hawk’s The Skatepark Project and rock band Portugal. the Man’s PTM Foundation.

Over the past three years, the NAAF has secured upwards of $30,000 for the group, while the latter two organizations donated $20,000 toward the cause. The Tucson Skatepark Alliance is helping design the future park while Mortal Skate Shop has donated free gear to the group while teaching the community the fundamentals of properly setting up and maintaining a skateboard.

Jacob Charley, 17, a member of Endure, said the idea came from the group’s founder and spokesperson, Eli “P.K.” Lewis, while they were skateboarding on a concrete basketball court in the GuVo District back in 2016. Lewis, 28, passed away during a car accident in 2020.

“We didn’t have a skatepark, so we had to improvise and use that slab of concrete, D.I.Y, you know. We built little ramps out of wood we found,” Charley said. “Our homie, P.K. said ‘Man, we should get a skatepark out here, you know’ and we all looked around at each other and were like, ‘You think so?’”

Once inspiration struck, the group reached out to the Tucson Skatepark Alliance, which put Endure in touch with the NAAF, according to Charley. The group then had to submit a proposal to the foundation. Selina Jesus, senior director of programs and tribal relations for NAAF, said she was impressed by the group’s drive to build something that was unavailable to their community, which is located on the farthest southwest portion of the Tohono O’odham Nation.

“Out here on the reservation, there’s nowhere they can go and skate. They have certain spots but nothing like a skatepark,” Jesus said. “We would see them out here in the community, but they really stated themselves as a group in 2017 when they made the proposal.

The foundation was able to bring the group’s idea to fruition by securing several grants and donations, Jesus said. After that, Endure had to apply for a land assignment from the local tribal government to get the property that would be home to the skatepark. They also had to make a presentation to their local community at a community meeting, as well as a district meeting to gain support. Luckily, they were assigned a property of a former community center with a still-usable concrete foundation.

“Here on the reservation, we don’t really own property. The process we have to go through is having to fill out a land assignment form and that’s what this group did,” Jesus said. “The area is already developing anyway because there is a community playground that’s really close to the skatepark area.”

Endure and the NAFF are still in the designing phase of the project, working with Tucson Skatepark Alliance member Jon Choi, along with TSA co-chair Chris Atkins and Borderland Construction co-owner Erik Williams. Adkins and Williams also own Mortal Skate Shop. At a recent zoom meeting between Endure, TSA, and NAAF, Choi and Williams presented potential ideas that would best utilize the slab currently on the property in the construction of the concrete skatepark.

They all intend to return to the slab in mid-February to solidify design plans and hopefully start construction by April or May. However, COVID may cause challenges to start construction before the hot summer months and they still need to raise another $15,000 to make sure the skatepark is what the group envisioned, said NAAF CEO Jordan Evans.

“Everything is kind of in flux with COVID,” Evans said. “We’re hoping to have a finalized set of plans by spring and then we can pick a breaking ground date. But the last piece of funding really is key for us to finalize plans.”

The skatepark doesn’t have an official name at the moment, but Endure is using the “free as a bird” concept their fallen friend, P.K. Lewis, often talked about as the inspiration for the design.

“I asked him, ‘What does free as a bird mean?’ He said ‘This is me. This is how I feel when I’m on a skateboard.’ Skateboarding was his passion and he said he felt like a bird flying around, looking at everything while on a skateboard,” Jesus said. “That was when he was in his comfort zone.”