Tucson City Councilman Steve Kozachik has had an interesting career in Tucson politics.

He accomplished the near-impossible when he won his midtown Ward 6 in 2009: He was a Republican who knocked out a Democrat opponent, Councilwoman Nina Trasoff. How rare is it for a Republican to knock out an elected Democrat? Kozachik's victory was the first time it had happened since a recall election in the 1970s.

But Kozachik soon was on the outs with the Republicans who had supported him. He frequently squabbled with conservative state lawmakers over issues of local control and midway through his first term, he jumped to the Democratic Party, which welcomed him with open arms.

Since then, Kozachik has served two more terms and hopes to win another this year.

"We've got some really significant issues that are on the table right now that I'm not going to walk away from because frankly, nobody else on the council was complaining about these things until I grabbed ahold of them," Kozachik says.

As he seeks that fourth term, Kozachik is facing two candidates who say it's time for change on the Tucson City Council: Miranda Schubert and Andres Portela. 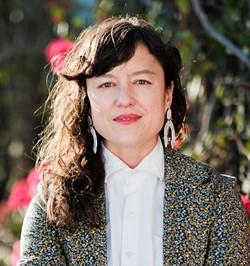 Schubert, is making her first foray into a political campaign, but she says her time in Tucson Roller Derby is serving her well. "So many transferable skills," she says with a laugh, before adding, "And not just in terms of an athlete's resilience and ability to work in a team and keep a cool head under pressure, but also organizationally, because I've been on the board of directors and an active part of leadership of the league since 2016."

Since moving to Tucson about a decade ago, Schubert worked as an academic advisor, first at Pima College and then at the University of Arizona, where she was among the leaders of the effort to establish United Campus Workers of Arizona, which represents the faculty, staff and student workers. Side hustles have included a KXCI radio show as well as a feminist-focused live talk show at Hotel Congress, Ladytowne.

Schubert says she's in the race because she thinks the council needs to do more to address climate change, correct structural inequities and racial disparities, develop affordable housing, continue the current free public transit program permanently and preserve open space. "We now find ourselves with a choice," Schubert says in an online campaign pitch. "Uphold the status quo or rebuild our systems to be more equitable and just."

The third candidate in the race, Portela, has similar worries about the status quo. Portela, 27, grew up between Tucson and Sierra Vista.

Portela says one way to help make housing more affordable would be to change Tucson's zoning so that more people can build second homes on their property where more family members could live.

Beyond housing issues, Portela says he wants to create more opportunity for Tucsonans along with a better transportation system and stronger environmental safeguards.

Kozachik says he's challenged the status quo throughout his dozen years on the council. He points to various initiatives during his time on the council. He tried to block the Broadway widening between downtown and County Club Road; the project is now underway, but planners trimmed the widening from eight lanes to six and Rio Nuevo is now involved in giving the "Sunshine Mile" a Mid-Century Modern makeover. He has worked with refugees released from Border Patrol custody, finding temporary housing for them at midtown's Benedictine Sanctuary and later helping with the efforts at Pima County's Las Alitas shelter. When the city stopped collecting glass in the recycling program, he set up collection centers and found a company to turn glass into asphalt. He's crusaded against gun violence, although the Arizona Legislature has generally blocked Tucson's efforts to restrict firearms. He's gone to bat for the Islamic Center at First Street and Tyndall Avenue when it became the target of harassment by UA students living in the off-campus towers that surround it. And after Kozachik challenged UA President Robert C. Robbins over testing students for COVID, the UA Athletics Department informed him that he was being laid off after more than three decades of managing projects and facilities. He says he's sure that he lost his job over being outspoken. "It doesn't take don't take a brain surgeon to connect those dots," Kozachik says.

Kozachik can be blunt, such as with the recent flare-up regarding the expansion of Reid Park Zoo. When protestors objected to plans to build a new tiger exhibit over Barnum Hill earlier this year, Kozachik sided with the zoo, saying it had done the required outreach years ago and construction was about to begin. Mayor Regina Romero sided with the protestors and delayed the project, with the council eventually voting (with Kozachik opposed) to spending up to $5.5 million for a new plan on top of $2.5 million on scrapped plans. "We're gonna spend $8 million to preserve Barnum Hill," Kozachik says.

Many fans of Barnum Hill, who say that it was the city's fault for not doing enough outreach to recognize that the man-made hill and lake were a vital community touchstone, are in Schubert's corner because Kozachik has been so blunt. He says he's willing to take his stands and let the chips fall where they may. "one thing about me is, you may disagree with me but you'll know why I have taken my position and I don't take any of them without studying up."

Schubert says the battle over Barnum Hill shouldn't have happened in the first place because city officials should have been more sensitive to the needs of the community. The situation has eroded trust between the city and its citizens and now "it's falling upon community members who have to stick up for their own interests and our own green space, and their elected official is not doing that for them."

Portela says zoo officials are getting a bad rap because the city didn't insist on better outreach that could have avoided the problems in the first place.

Kozachik is confident enough in his changes that he has foregone fundraising for the campaign, vowing to keep his spending beneath $500.

"I think people who are participating in the electoral process probably recognize who I am and what I've done," he says. "And you know, if that's sufficient, then great. And if not, I'm not going to go out and ask people to open up their wallets to try and convince them otherwise, We've got a lot of local small businesses and nonprofits who could use those $100 checks. So that's where I want those dollars to go."

But he is getting support from an independent campaign committee, Friends of Steve K, which has reported contributions from developers such as Tom Warne, David Dabdoub, Scott Stiteler, Randi Dorman as well as car dealer Jim Click, a major contributor to GOP candidates and causes.

Kozachik says he doesn't know what the independent campaign is doing, but "whatever they do better be positive. Because one of the things that makes me crazy is negative politics."

Neither Schubert nor Portela have raised much. Schubert raised just over $16,000 as of mid-July and sent in an amended application for public matching funds, but had not received them as of this week.

Portela raised just $260 as of mid-July.

The winner of the race will face independent candidate Val Romero in the November general election.