Women’s Foundation raises over $700,000 for women and girls 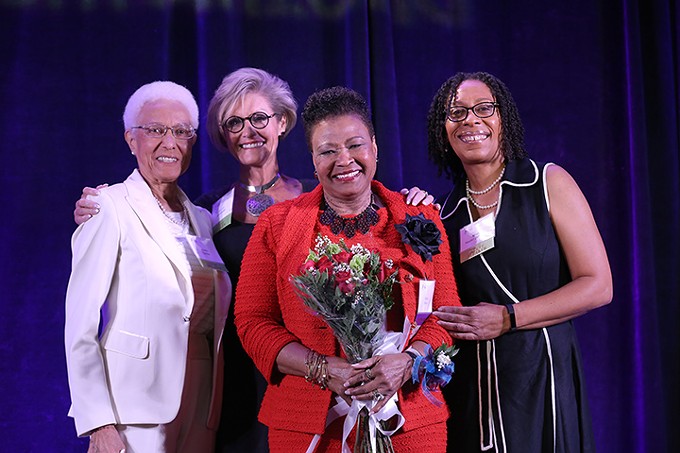 The Southern Arizona Women's Foundation is raising awareness and money for issues affecting women and girls at its 25th annual luncheon, on April 18. For 28 years, the Women's Foundation has affected change in local communities by funding research, advocacy, grant making and leadership development.

One of its leadership programs is the Unidas Girls' Leadership and Philanthropy grant. Girls ages 14 to 18 from a dozen schools spend a year working on a philanthropy project.

Women's Foundation CEO Dawne Bell said the girls learn what it's like to sit on a nonprofit board, gaining hands-on experience in community service, leadership, social justice and grant-making. The program culminates in a $5,000 donation to a nonprofit that represents social change important to the teens.

Last year, the program's focus was immigrant justice, and the teens chose the grant recipient Mariposas Sin Fronteras, a nonprofit that supports LGBTQ+ people in immigration detention. This year, Unidas' focus is homelessness, with an emphasis on women and girls dealing with issues such as sexual violence, LGBTQ+ discrimination and access to healthcare.

"We're teaching philanthropy, but really the girls teach us more than we teach them," Bell said. "Every adult I talk to wants to hear from teen leaders. It's really inspiring, and the Women's Foundation has been hearing from teen leaders for more than two decades."

The foundation's work helps women and girls across a variety of issues, from escaping domestic abuse to helping first-generation college students attain degrees. The organization also works on influencing policy, such as improving access to childcare for low-income mothers.

In 2017, the foundation provided over $700,000 in grants to 28 organizations, with donations from over 2,000 local individuals and companies, some who donated as little at $5.

"Every dollar really does matter," Bell said. "It's about the collective impact that has."

The foundation is also volunteer-led, with over 200 volunteers, including the nonprofit's board members, which also has a few of the teens in the Unidas program. Board Chair Deb Dale says it's great working with the teens on the board.

"I think young people are woefully underestimated," she said. "If we say that's who we're representing and advocating for, we should have their voices at the table."

She recently went to the State Capitol with other members of the board, where they met with over 50 lawmakers from both political parties to share the foundation's research on employment barriers women face, especially single mothers. The foundation was also a leader in offering unrestricted grants, allowing vetted nonprofits to spend grant money where it's needed most.

"It's a great way to make a significant impact for a lot of high quality nonprofits at one time," Dale said about supporting the Women's Foundation.

The luncheon will feature the stories of women and girls who've overcome great challenges, and is a chance for donors to see the impact their contributions are making. With over 1,000 people attending, the foundation's annual luncheon is the first charitable luncheon big enough to be held on the Tucson Convention Center's arena floor.

The luncheon will honor two award recipients. Gail Giclas, who Bell said is an "incredibly powerful and humble philanthropist," is receiving the Lifetime Achievement Award. She served on the Women's Foundation of Southern Arizona Board of Trustees and currently volunteers as an advisory council member with the foundation.

In 20 years with the foundation, she's volunteered in a number of capacities, but one of her favorite positions was on the grants committee, where she helped choose grant recipients.

"It's just that grassroots feel of your own community and really getting in touch with the needs that are out there," Giclas said.

She also co-founded Mother/Daughter Giving Circle with her daughter, involving mothers and daughters in local philanthropic causes. Every few months, a mother-daughter team would choose a charitable organization or nonprofit to introduce to the group, which helped people learn about organizations they wouldn't necessarily seek out on their own.

Giclas' daughter was in middle school when they started the project. Now, in her first year of college, her daughter continues to do charitable work.

"You just make time for the things that are important to you," Giclas said. "I've always told my children, 'You get more than you give.'"

Her work with the Committee on the Impact of Domestic Violence recently helped implement a statewide risk assessment process to better protect the victims of domestic abuse most at risk of future injury and even death.

Harper-Guerrero said her work is about honoring vulnerable people and communities and making their stories visible, adding it's not just a job but a way of life.

The first in her family to go to college, Harper-Guerrero said she was raised to care about other people, but going to college gave her a new framework for understanding abuse she had witnessed in her own life and the lives of others.

It gave her "an opportunity to think about the ways that we can intervene and teach young boys and girls about relationships and teach them about other people's humanity," she said. "Thinking really consciously in the ways we impact the lives of other people."

The luncheon is on Wednesday, April 18, at 10:30 a.m., at the Tucson Convention Center, 260 S. Church Ave. To find out more or get a ticket go to womengiving.org/annual-luncheon. It costs $75 per person, and $40 a ticket is tax deductible. Tables cost $700 each, with $400 tax-deductible. For questions on the luncheon, contact Terri Johnson at tjohnson@womengiving.org or 622-8886, extention 2. All proceeds going to programs that empower women and girls.

The Southern Arizona Women's Foundation is always looking for donors, grantee partners and volunteers. For more info go to womengiving.org or call 622-8886.