The Chronicles of Narnia: The Voyage of the Dawn Treader

Without going too deeply into the history of the Chronicles of Narnia movie series, it is necessary to point out that The Voyage of the Dawn Treader represents the franchise at a crossroads, and examine why, three films in, the seemingly can't-miss money machine has reached such a low point.

Decades ago, when C.S. Lewis' books were all the rage, it was impractical to think of films like this. Visual effects were obviously one reason, but another was a worldwide movie industry that was not as sophisticated as it is today. Now, it's no problem to release a blockbuster around the world on the same day and watch the money flow in, but that's a fairly recent development, impacting just the last 25 to 30 years of Hollywood releases.

Ten years ago, when Harry Potter and The Lord of the Rings made an expansive series like Narnia something of an inevitability, Disney locked up the rights, but abandoned them two years ago after the tepid response—mostly here in the United States—to the second film in the series, Prince Caspian. Unfortunately, Caspian is a stronger and smarter film than the original film, The Lion, the Witch, and the Wardrobe, but it's also more violent and less family-friendly. The House of Mouse decided it didn't want to uncork the capital to make five more films, so 20th Century Fox now handles the franchise—or mishandles it, based on current evidence.

Dawn Treader keeps the principal cast (except the talking rodent, Reepicheep, is now voiced by Simon Pegg instead of Eddie Izzard) but swaps director Andrew Adamson for seasoned veteran Michael Apted. Apted may have directed Coal Miner's Daughter and Gorillas in the Mist, but he hasn't hit the mark with a feature film in quite some time (see Nell, Extreme Measures and the James Bond disaster The World Is Not Enough), so he's an odd choice for a franchise that is looking to win over audiences again.

Sadly, Apted doesn't bring anything identifiable to this installment, a film that makes no use of its 3-D conversion, glosses over characters and events wholesale, and takes a few steps backward in Narnia's artistic maturity. The pendulum, which moved in a positive direction with the more vital Prince Caspian, has now swung all the way back in the other direction: If this isn't the final movie in the series, it might well be the last one most people pay any attention to.

Lucy and Edmund Pevensie (Georgie Henley and Skandar Keynes) are again whisked away from World War II England to the magical land of Narnia, this time accompanied by their curmudgeonly cousin, Eustace (Will Poulter). Even while he's on the ship and even while he's talking to sword-fighting vermin and a minotaur, Eustace doesn't believe in this fantastic place, waiting for the perfectly reasonable explanation that never comes.

Eustace is the only noteworthy thing about this film at all, earning about the only dialogue that appears to have received any effort, and undergoing the only evident arc in the story. Poulter was seen previously in the English export Son of Rambow, and while his execrable Eustace is not an entirely new creation by comparison, Poulter nevertheless gives himself room to grow within the character rather than just recite lines. That is a trap many child actors fall into, but here's one who seems keen to develop the craft.

Around him, Georgie Henley, a precocious revelation in The Lion, the Witch, and the Wardrobe, is reduced to utterances like: "Look!" "Susan's bow and arrow!" "Reepicheep!" "Look!" and "For Narnia!" Skandar Keynes has even less to do until the climactic battle scene, a seven-minute respite from utter boredom in these two hours.

While that sea battle enlivens things considerably, it also underscores how desperately Dawn Treader needs a personality. Lacking a true villain and focused instead on a scavenger hunt involving seven swords spread around Narnia, there isn't much to cling to. If this were a better-looking film, full of rich, creative CGI, perhaps that would add some flavor. The 3-D—as is always, always, always the case with these spurious up-conversions from standard-definition video or 35mm film—is lackluster. There is never a point at which the action seems to be more alive because of the technology, which is quickly becoming a gimmick yet again. Michael Apted is not known for being an action director or a visual specialist, so Dawn Treader struggles to find and keep a pulse.

It's a movie waiting for a way to be told, and for a franchise at a crossroads, that's a sign pointing down a dead-end street.

The Chronicles of Narnia: The Voyage of the Dawn Treader is not showing in any theaters in the area.

Until the End of the World 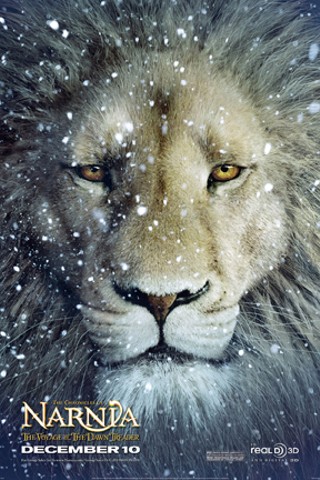