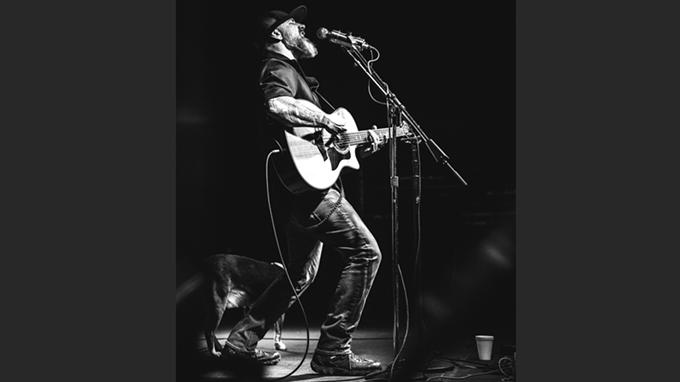 (Dave Mensch/Submitted)
Musician Dave Mensch will bring originals and his interpretation of favorite covers to Tucson for the first time.

When Dave Mensch was a kid, his dad told him to find something that he loved and figure out a way to make a living at it.

Although it took a bit, he accomplished that with music.

A Mesa native, the singer-songwriter makes his first appearance in Tucson from 8 to 11 p.m. Friday, Jan. 20, at Chicago Bar. It kicks off Gauntlet Entertainment’s 2023 season.

“I haven’t been back to play in Arizona since just before COVID,” Mensch said. “It’s the first time in Tucson — normally I’m in Cave Creek — so I’m excited to expand out to some new areas.”

“I try to lean on originals, for sure,” Mensch said. “The stuff that I write is very rockin’ country. I do tons of different genres. It’s not just one style of music.”

He loves to engage with his audience, he said, by telling stories and playing songs he knows the audiences enjoy.

“It’s hard to describe, but they can control the tempo of the song live,” Mensch said. “I do crowd-interacting songs. I do improv songs that I make up right on the spot. I would say I’m a little more engaging of a songwriter compared to most.”

Music and entertaining are Mensch’s longtime passions. He won a 2015 BroadwayWorld Award for playing Roger in “Rent” and starred as Stacee Jax in “Rock of Ages,” both in Colorado.

The feeling was addictive. He loved performing with them and then started writing and playing music he enjoyed. The hobby turned into a full-time job on June 5, 2006.

“Which means, really, that I never work a day in my life,” Mensch said.

His career highlights include opening for Kansas, 38 Special, Dwight Yoakam, Tanya Tucker and Dan Fogelberg. But more than anything else, it is the chance to connect with audiences that excites him as a musician.

“The biggest thing is how much the fans really enjoy the shows,” Mensch said. “Each time somebody says to me, ‘I just really love your take on this song’ or ‘I love the words that you wrote for this one’ — that really keeps me going.”

He said he loves to perform in new places like the Chicago Bar and be introduced to a different audience.

“I just love what I do,” Mensch said. “The inspiration that I get from conversations with fans or friends or venues brings out songs that I didn’t have before. All my experiences are wrapped up into what I do.”

Since the pandemic has waned, he’s been playing more. He was impressed by the support he and other musicians received during the shutdowns.

“Fans, friends and family really came out of the woodwork to support musicians during that time which was amazing to feel that for sure,” Mensch said. “They’re awesome. Venues worked hard to be able to do social distance shows and things like that. I have a great network as far as the companies that I work with who put things together for everybody to continue working during that time.

He’s eager to bring his brand of music to a new audience and to connect with them during the show.

“The biggest thing for me as a musician is that I don’t try to pretend to be the artist that I’m covering,” Mensch said. “Every song that I do is my interpretation of that cover. If you’re coming to a show, expect something different or a fresh take on a particular song. I hope that whether I’m doing an original song or a cover song, that audiences will notice the originality of what is being performed. I really want to give them an original take on the things that I play.”