A Quiet Place is a disquieting sci-fi experience 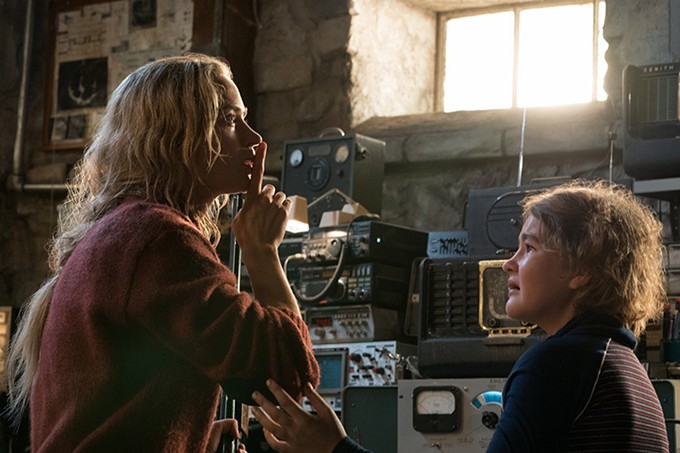 Noise intolerant neighbors are taken to all new levels in A Quiet Place, a new horror film from director John Krasinski.

Krasinski also stars as Lee, a father trying to protect his family in a post-apocalyptic world besieged by horrific aliens who will tear you apart if you make so much as a peep. The opening sequence shows Lee, his wife Evelyn (Krasinski's real life wife, Emily Blunt, a.k.a. the next Mary Poppins), and three children taking a very quiet walk home from a drug store. One of them makes a sudden noise, and the results are pretty scary for a PG-13 movie.

The aliens are blind, so they hunt by sound. Not, say, the sound of a river running or a bird chirping, but sounds that are more "interruptive," like fireworks, a person screaming after stepping on a nail or really loud farts. The gimmick lends itself to some faulty logic at times, but it does provide an overall interesting premise: Speak audibly in relatively quiet surroundings and you will get your head bitten off. It's like everyday life is a hellish library where the penalty for gabbing or dropping something is death.

Krasinski's film gives you no real back story about the aliens. A few glimpses of newspaper front pages let you know that the world has been wiped out by the species. One look at them (they are a cross between Ridley Scott's Alien and the Cloverfield monster) and you know that just a few days with these things running around would decimate the world population.

Blunt gives the film's standout performance as somebody forced to keep quiet after not only a painful injury but, on top of that, having to give birth in a bathtub while an alien clicks and claws nearby. It's scenes like this, and one involving a crying baby in a flooded basement, that give Blunt a chance to call upon a myriad of facial expressions that will chill your blood. She pulls you into every moment with an earnestness that is real and ever relatable.

The film declares Krasinski as a director of true ingenuity. He's done well with family drama before (2016's The Hollars was a good if little noticed movie), but this one takes his directorial value into the stratosphere.

The monsters themselves are stellar CGI creations, a nice achievement considering the movie was made on a relatively low budget. Charlotte Bruus Christensen provides excellent camerawork, while Marco Beltrami's score actually gives you something to listen to. The performers communicate mostly through sign language and whispering, which makes for a pretty quiet movie. (Unless you are watching the movie next door to an IMAX theater screening Ready Player One so loudly you can make out the dialogue. Bad planning from the theater manager side, I say.)

Krasinski compliments his directing chops with a fine performance as a guy doing everything to keep his sanity and protect his family, including a young deaf daughter (the superb Millicent Simmonds, who is actually deaf) and son (Noah Jupe, the little guy who broke your heart in Wonder). The kids are also terrific here, so Krasinski gets another kudos for casting. Did I mention he co-wrote the screenplay, too? Krasinski isn't messing around with this one.

Apparently, there was some talk of making this a Cloverfield movie, but that got scrapped early in production. That's a good thing, because this one stands on its own. Given it made a big pile of dough on its opening weekend, it's a safe bet a sequel will get greenlit. Lee observes signal fires from other survivors during the early part of the movie, so perhaps a story with another family could happen. I hope not. They should leave well enough alone.

While there are some "Yeah, right!" moments where the screenplay's own rules about the aliens are broken, there are far more sequences that are extremely well done. Krasinski and Blunt combine for a movie that you won't soon forget, and one that will have you being a little quiet around the house after seeing it.