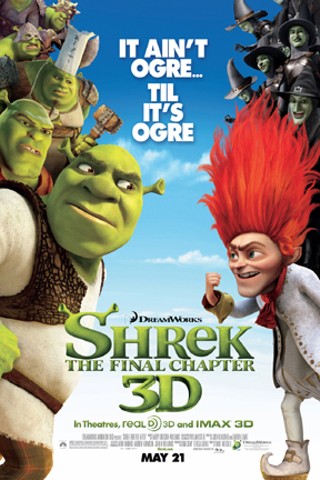 It takes a one-sided deal with Rumpelstiltskin to shake Shrek out of his family-man doldrums—and that same arrangement shakes the Shrek series out of its funk, too. For the first time since the original movie, the film series is fun to watch and not just a senseless parade of voiceover stars du jour. Outside of Antonio Banderas’ Puss in Boots, Rumpelstiltskin—voiced by animator and cartoon writer Walt Dohrn—is the single-best creation in all of Far Far Away. He gives the movie a snarky sense of humor, which falls in line with the first movie and puts Shrek Forever After leaps and bounds ahead of the previous sequels.
By Colin Boyd

Shrek Forever After is not showing in any theaters in the area.