Shredding Sisters: Yasmynn Lopez is getting more girls on skateboards 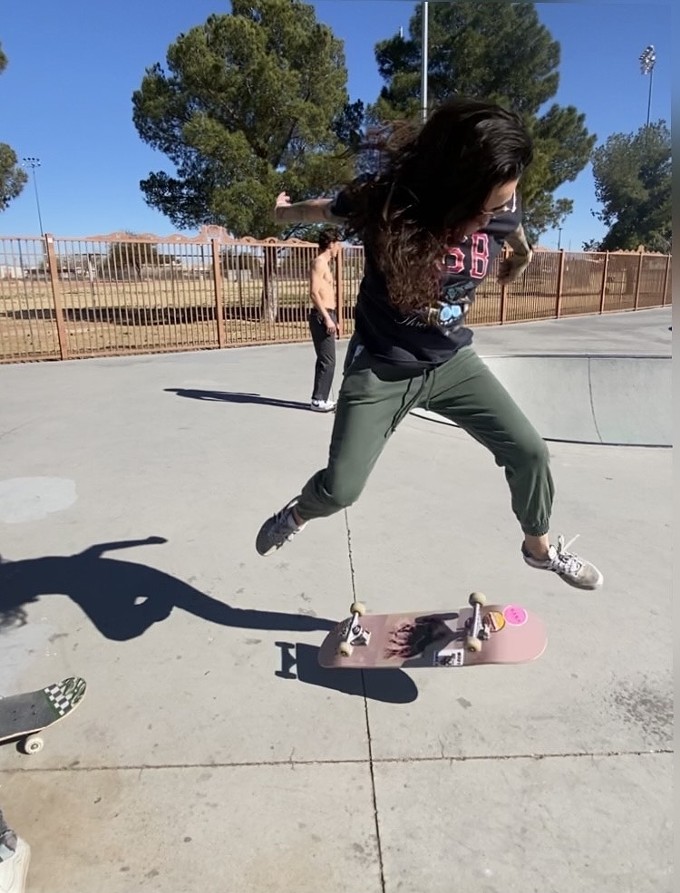 Photo by Carter Berg
Yasmynn Lopez: “When I skateboard, I feel my most relaxed.”

Yasmynn Lopez doesn’t feel happy until both feet are on a skateboard.

If it wasn’t for the Walmart skateboard her dad bought for Lopez when she was 15, she isn’t sure where she would be today. Lopez, now 32, is hoping to open that same door for other girls interested in skating.

“When I skateboard, I feel my most relaxed,” said Lopez, who goes by Y-Lo. “It has really helped me through some hard times. Like, if I’m ever stressing over work or personal shit, I just come out here with my girls and enjoy the vibe.”

Lopez, a Tucson native and avid skateboard enthusiast, has seen the Tucson skate scene grow from its humble beginnings of backyard rinks to several public skate parks being constructed throughout the city. For many local skaters like Lopez, the sport has become less of an act of rebellion and more of an act of communal therapy.

“I first started skateboarding when I was a teenager,” Lopez said. “My dad bought me a cheap skateboard from Walmart and said if I drop in like the rest of the boys do without falling, he would buy me a nicer skateboard. That same night I finished the bowl.”

Back then, things were different in the skateboarding world.

“There used to be fewer places to skate here in Tucson and the ones that were open were usually pretty packed with mostly dudes.”

Based on her own observations, Lopez says the number of children—especially girls—who have shown an interest in skateboarding has skyrocketed. Lopez attributes this change to a cultural shift in opinion towards girls enjoying traditionally male-dominated sports like skateboarding.

Lopez says the group of girls she skates with aims to make anyone feel comfortable at the skatepark regardless of age, gender or experience.

“I love seeing kids get on skateboards for the first time,” she said. “It’s such a fun thing to witness. I think the skate community here has really opened up to taking in beginners. I see them all the time now at the parks. When I was younger, a lot of older skaters were somewhat secretive about where/how they skate. Nowadays with so many public skate rinks and the Olympics showing skateboarding as a sport for the first time, it’s so much easier for a kid to get access to a skateboard.”

Since one of Lopez’s past jobs included working with kids, she’s often been given the opportunity to introduce the world of skateboarding to young minds. Lopez also works part time at Mortal Skate Shop, where she builds, repairs and sells skateboards.

In 2017, Lopez and some of her friends created BABZ, a group of girls who skate together at various parks throughout Tucson. BABZ introduces both girls and women on how to get the basics down on a skateboard. BABZ also attends events centered around the Tucson skate scene, inviting anyone who may feel uneasy at a skatepark to join them.

Ciara Barraza, 23, has only been skating with BABZ for about a year and says her skills on a skateboard have tripled. Barraza, who was convinced by Lopez to learn skateboarding during the COVID-19 pandemic, had always been interested in learning how to skateboard but was reluctant to go to a skatepark alone.

“Learning how to skateboard is challenging as is,” Barraza said. “You honestly fall on your ass quite a lot. And when you fall on your ass in front of strangers, it hurts even more. But being around a good group of girls who you trust really makes the skatepark way less intimidating. I really wish I had a group like this when I was younger. If I did I probably wouldn’t be currently falling on my ass so much!”

Another member of BABZ, Aretha Raiwe, says her love for skateboarding has only grown since joining the group. Raiwe, who graduated from the University of Arizona in spring 2021, joined BABZ after wanting to learn how to skate in a safe, comfortable environment.

“I’ve only been skateboarding for about four years because there weren’t many skateparks where I grew up, let alone a group of skater girls,” Raiwe said. “A while back I visited my family in Lagos and I brought a skateboard with me to give to my little cousins and their friends. Watching their faces light up when I showed them how to ride was priceless. I returned recently and needless to say they’ve developed a love for it. If I were to have a child in my responsibility, I would want them to try to skateboard. I think it builds necessary confidence early on.”

BABZ aims to break that barrier between gender and sport as well as welcome those who aren’t traditionally seen at a skatepark, be seen. Lopez says her love for skateboarding is too deep to see other people feel unwelcome or uncomfortable at the skatepark. “Skateboarding is a source of happiness.”