Other than a tacked-on skin scene, there's nothing worth seeing in 'Whiteout'

Kate Beckinsale's career has officially hit a pothole. Before the boring Antarctica mystery Whiteout, she was in two straight-to-DVD ventures: Nothing but the Truth and the deplorable Fragments. Whiteout should've probably suffered the same fate.

It's not completely awful, but there is no real reason to see it—except for a Kate Beckinsale shower scene that happens just minutes after her U.S. Marshal character is introduced. After a plane crash, director Dominic Sena gives us a long, useless and presumably expensive tracking shot as Beckinsale's character, Carrie, walks to her living quarters. She then strips out of her parka and other clothes until she's in her underwear.

She walks to the shower and bends over to turn on the water, sticking her butt into the camera lens. It really is quite glorious ... I think I might've cried. We then get a full body shot of her in the shower from the outside, but the damn glass is steamed up. I hoped we might actually get nudity, because this thing is R-rated, but no such luck.

After the shower, the real movie starts, and one wishes she'd just stayed in the stall. The messy plot involves some mysterious cargo on the plane that crashed, a mangled body found on the ice, and somebody running around and killing people with an ice ax. Beckinsale's Carrie is supposed to head back to the United States, but she finds out she will be in Antarctica for the winter, what with people getting killed and all.

Tom Skerritt shows up as a crusty doctor; the interesting Gabriel Macht appears out of nowhere as some sort of international agent; and Beckinsale remains in heavy clothing for the rest of the movie.

There are plenty of scenes with characters struggling in snow storms, yet only one featuring Beckinsale in her panties just before showering. I got to thinking: Was the shower scene written into the original script, or did they decide to shoot it when they realized their movie kind of sucked?

The film, based on a graphic novel, wants so much to be a mystery, but since there are only a few true suspects, figuring out who the bad guys (or girls) are is pretty easy.

What's hard to figure out is why they didn't just base this whole film in the shower. Seriously: Ditch the whole Whiteout thing with the snow and stuff; call the thing Kate's Impossibly Brilliant Ass; and never let the camera leave the shower. Skerritt can stay in the movie as a towel boy. You can't tell me a major release movie called Kate's Impossibly Brilliant Ass wouldn't gross more than $100 million.

Thanks to John Carpenter's The Thing, which had a similar setting, I kept expecting some sort of alien monster to enter the fray. That vibe was further helped along by the presence of Skerritt, one of the original stars of Alien. Yeah, a monster in the movie probably would've made things more exciting.

In case you are thinking I'm some sort of freak with a one-track mind because all I've basically done is talk about Kate in the shower, go see Whiteout. I think once you've seen it, I will be vindicated. The shower scene is, without a doubt, the only moment in this movie that makes an impression.

Whiteout is not showing in any theaters in the area. 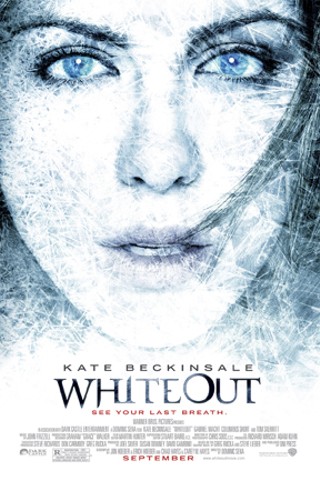