Now playing at AMC Loews Foothills 15 (742-6174), Century El Con 20 (202-3343), Century Park 16 (620-0750), Century Park Place 20 (747-7200) and De Anza Drive-in (745-2240).
300
Zack Snyder
Gerard Butler
Lena Headey
Dominic West
The original Frank Miller graphic novel 300 is a great read for those who enjoy the art form. It was a chance for him to reunite with one of his Batman: The Dark Night Returns artists, and they constructed a masterpiece. Director Zack Snyder seemed an interesting choice to take the epic to the big screen. His only feature project had been the remake of Dawn of the Dead.

As the 300 film shows, he was the right choice.

300 is a visual stunner, a violent, funny, consistently entertaining movie that will make fanboys and the uninitiated cheer and scream. (I know this, because when I watched the film, people cheered and screamed. A lot.) From the moment a Persian messenger comes riding over a hill--in an incredible-looking shot--the film never ceases to amaze with its imagery. Shot very much like another one of Miller's adaptations, Robert Rodriguez's Sin City, it's a stunning combination of live action and CGI/green screen.

The film takes a grandiose approach to ancient Sparta's stand against the Persian Empire circa 400 B.C. Miller's world doesn't strive for historical accuracy. It's inhabited with muscular hunchback monsters, oversized elephants, giant rhinos and other abnormalities. In fact, just about anything and everything--except a scene where somebody eats an apple--is a physical impossibility in this movie.

At the center of the story is King Leonidas (The Phantom of the Opera's Gerard Butler), a defiant leader with a lot of faith in his men. When the Persian Empire threatens to overtake his land, he takes an army of 300 men on a mission to kick some unholy ass.

The battle scenes provide constant amazement. Limbs fly and blood splatters in an impressive re-creation of Miller and Lynn Varley's look on the graphic-novel page. Bodies riddle trees and are stacked up to make giant walls. Armies and large beasts take spills off vast cliffs. But nothing quite tops what 300 does with thousands of arrows in flight: I was sitting in the audience, and I thought I might get hit.

Unlike in the novel, the soldiers don't run around naked, but they do often go topless. It's quite possible that no film has ever managed to gather this many rock-hard abs in one production, with the possible exception of Rock Hard Abs Bermuda Extravaganza. (A visit to IMDB.com reveals that this film actually doesn't exist.) There are enough steroids in this movie to fill the Atlantic.

Butler rises to Superstar Action God with this film. He's been impressive in the past, showing some decent pipes in Opera, but this one makes him the new Stallone. I'm thinking the chances for a sequel are rather slim, but if he plays his cards right, Butler is going to parlay this one into a decent career. Lena Headey does a nice job as Queen Gorgo, left to hold down the fort while her husband stacks dead Persians toward the skies. Dominic West makes for a decent villain. The rest of the cast sort of just blends in.

There are a couple of slow patches, but the big moments more than make up for them. The film doesn't skimp on the excitement and keeps the action coming. One could say it's a bit shallow, and that would be missing the point. This is big, empty-headed fun, full of gladiators and crimson geysers. If your taste in gladiator movies flies close to Spartacus, you might want to skip this one.

I'm not anticipating too much trouble for Snyder as he gets his next project, Watchmen, another graphic-novel adaptation, off the ground. Everybody from Terry Gilliam to Darren Aronofsky has been pegged to direct it in the past, but it looks like Snyder will be the one to finally get the job done. Judging by what he's done with 300, he's poised to become king of the graphic-novel adaptation.

300 is not showing in any theaters in the area. 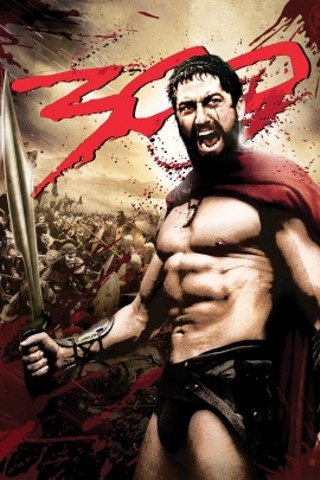